Skip to content
Posted inUncategorized
Posted by By PYGOD April 21, 2014No Comments Sullivan was a boxing immortal, the link between bare knuckles and glove fighting, and the first great American sports idol; He was powerful, quick, could hit with either hand but had exceptional strength in his right, and could take punishment; John L. could break a man’s jaw with a single punch.

Due to early day legal restraints, some competitive bouts were listed as exhibitions for legal purposes. They are listed here as exhibitions only if they were actually friendly sparring sessions, not of the kind where Sullivan was attempting a knockout As to his 50 knockouts in his Aug-Oct 1883 tour of America, the 29 knockouts during his 1883-1884 tour of America and the 51 exhibitions during his 1887-1888 tour of England, Sullivan’s numbers may have been inflated. Only confirmed bouts are included here.  As a mather of fact, John L. Sullivan, a knockout specialist, is estimated to have knocked out some 200 men during his career while
fighting all types of men – lumberjacks, blacksmiths, local strong boys, and
professional fighters.  Other sources claimed that he fought over 450 matches in his career by boxing anybody with $500 to put on table while touring the world in search of worthy challengers willing to get their ass kicked.  Those bouts weren’t official matches so we can presume that he lost a couple of them.

THE HEAVYWEIGHT CHAMPIONS OF THE WORLD 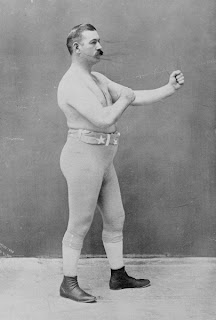 If Tiger Woods is the first sports billionaire John L. Sullivan was the first ever one million dollars athlete.  Which is no small feat in 19th century’s money.  That’s a lot of dough baby!!!

Outside of the ring, John L. Sullivan was known as a bully, a boozer, and a braggart. He not only ruled in the boxing ring but also in street fighting and barroom brawling.  He was “notorious for drinking and tavern brawls.”

At first, his partying might seem cool and funny but it was also his biggest downfall.  His boxing career and stardom faded a la Mike Tyson just to give you an idea.  Alcoholism burried him. 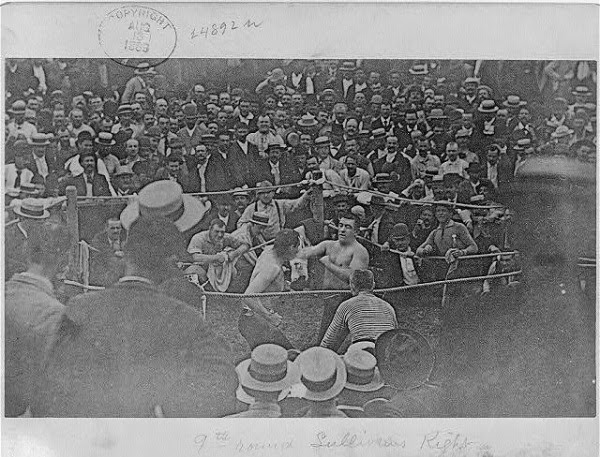 Words from the champion himself (His Fighting Secrets)
But Sullivan was also firm in saying, “There is more intelligence required in this business than outsiders give us credit for. A man fights with his head almost as much as he does with his fists. He must know where to send his blows so they may do the most good. He must economize his strength and not score a hit just for the sake of scoring it. Learn to strike straight and clean. Swinging blows nearly always leave an opening for your opponent. It is always well to do your leading with the left, reserving your right for a good opening. Always watch your opponent. As soon as you see him about to lead, shoot your left into his face. The force of his coming towards you will increase your blows considerably.”

“I endeavor to hit my man above the heart or under the chin or behind the ear,” Sullivan explained. “A man wears out pretty soon if one can keep hammering away in the region around the heart. A blow under the chin or behind the ear will knock a man out quicker than a hundred blows on the cheek or any other portion of the face. I have always considered it necessary that a young man, in order to become an accomplished boxer, should have brains as well as muscle. I never knew a thick-headed fellow yet to become skillful in the manly art.”

Sullivan also took pride in the fact that he was self-taught and had learned his trade from sparring and watching other fighters. “I never took a boxing lesson in my life,” he said. “No professor of sparring can ever claim me as a pupil. What I know about boxing, I picked up from hard experience and intelligent observation. I belong to no school of boxers and have copied no special master’s style. I always fight according to my own judgment. If a man can’t train himself, no one in the world can do it for him.”


“The whole art of training …consists in two things, exercise and abstinence, abstinence and exercise, repeated alternately without end. A yolk of an egg with a spoonful of rum in it is the first thing in a morning, and then a walk of six miles till breakfast. Then another six or seven miles till dinner-time”

Of the fight itself he reports- “There was little cautious sparring – no half-hits – no tapping and trifling, none of the petit-maîtreship of the art – they were almost all knock-down blows: – the fight was a good stand-up fight.”
In Sullivan’s day a training camp usually lasted eight weeks, the first week was spent sweating the alcohol out of his system! The rest of the training centered on taking unwanted fat off of his body in preparation for contest. “Exercise and abstinence” indeed! There was a lot of time spent sweating under blankets and getting rub downs during training.

He never sparred in preparation for fights- too hard on the hands. He had the same sparring partner who worked with him for years, his name was George Bush. They would walk through the fight over and over working out what was going to happen at each stage and what tactics where going to be used when. Then Bush would hold a rugby ball and move around and Sullivan would throw body shoots at it while working on his timing and footwork.

John L. shaved the sides of his head in preparation for a fight to prevent hair pulling. He worked on takedown defense in training camp because being thrown down counted just as much as a knock down. He used to wrestle with William Muldoon, the great strong man and conditioning expert of his era, to get ready for big fights. Muldoon trained him for his greatest contest, a bout against Jake Kilrain that lasted two hours in the mid day heat in Mississippi.
Sullivan’s primary training method was what Ernst van Aaken termed the Long Slow Distance method of roadwork. He walked 12-14 miles each morning, running the last two miles “at a dead run.” He then cross trained with swimming by treading water for 15 minutes. He went to the gym and worked out in the afternoon with light dumb bells and did a traditional boxing/wrestling workout in which he found rope skipping to be “the perfect exercise. “

In resume the John L. Sullivan’s workout is:  Get up early and start walking for six or seven hours,then run, then swim, then wrestle and then do a boxing workout!

Trainer William Muldoon took John L. Sullivan to these training barns to get him into shape for his big fight scheduled with Jake Kilrain. The training took place for six weeks and during it, Muldoon worked with Sullivan on a tight training schedule. Sullivan dropped in weight from 260 pounds down to 200 in these six weeks. The training consisted on many events including running and walking miles each day, chopping wood and training with a medicine ball. Sullivan met Kilrain in the boxing ring in 1889 and beat him by way of knockout after 75 rounds.


The Darkest Side of John L. Sullivan
http://www.ringsideboxingshow.com/SheltonBLOGSullivanHumiliation.html