Skip to content
Posted inUncategorized
Posted by By PYGOD November 29, 2012No Comments This video of the 1995 World’s Strongest Man competition. This is the 5th heat and put the competitors head to head in an arm wrestling contest. Magnus Samuelsson who won the strong man competition in 1998 makes his first appearance in 1995 and despite his this smaller size breaks the arm of a much larger competitor “Megaman” Nathan Jones. 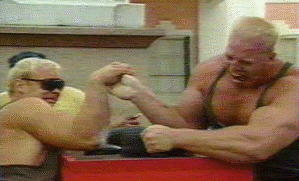