Skip to content
Posted inUncategorized
Posted by By PYGOD August 1, 2013No Comments Hockey enforcers are warriors and professional fighters, at least in my view.  But how these hockey brawlers would fair in a legit combat sport like MMA and boxing?  The results are far from impressive.  Minus a notable exception, our favorite hockey goons were far from brillant in the ring or cage.  In reality, they got their asses handed.

On this list, our hockey gladiators are mentioned in order of success in boxing and/or MMA.

Bossé was the # 1 enforcer of the North American Hockey
League.  And most likely the only hockey enforcer worth mentioning on this list. 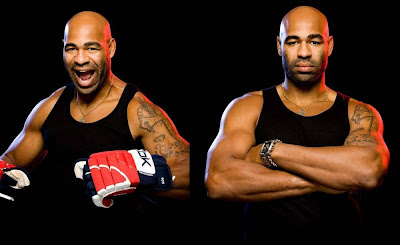 In April 2011 Brashear signed a three fight contract with the Mixed martial
arts promoter Ringside MMA. Brashear’s
first fight occurred on June 4, 2011 against designated victim and first-timer Mathieu Bergeron, a 6’6″, 270-pound muscleless biker henchman with a SS lightning bolts tattoo on his flat chest, at the Colisée Pepsi in Quebec City.  (His two or three previous scheduled tomato cans opponents pulled out of the fight).  Brashear only needed 21 seconds to knock out his opponent. We never heard again about Ringside MMA, the last update on their website was in June 2012. As for the two other Brashear’s contract fights, the project seems to be cancelled.  Ringside MMA attempt to create a new Kimbo Slice failed miserably.  At least, they tried. 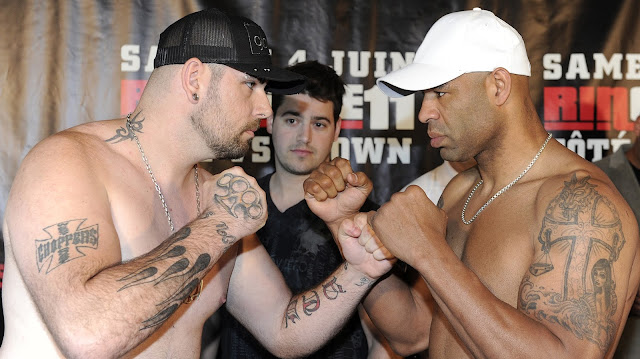 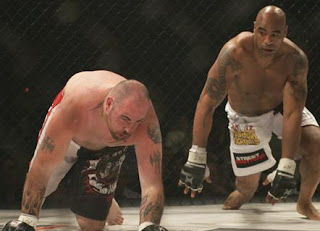 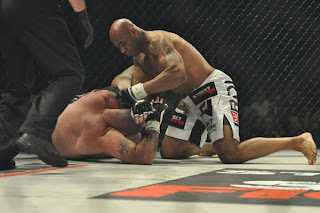 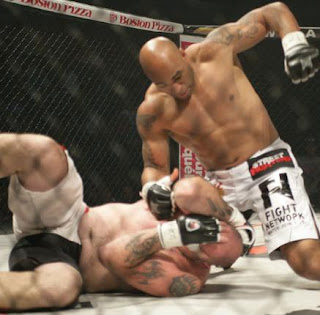 During the lockout he spent time as an amateur boxer compiling a
2–1 record, including an unspectacular win against fellow hockey brawler Mike Brault.  Later he trained with former heavyweight champion, Smokin’ Joe Frasier. 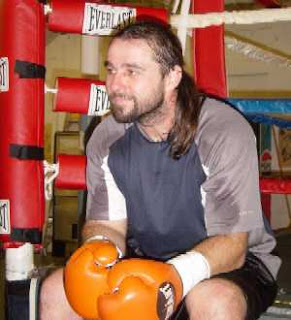 Won his pro boxing debut by first round KO against a fellow first timer.  But was KO’ed in the 3rd round by a novice boxer and future feather-fisted journeyman named Dave Brunelli.
Damn!  These hockey goons sucks at boxing!!

Known for his willingness to fight during games, it was reported September 5,
2009 that Perrott had retired from professional hockey to focus on a potential
career in boxing. Perrott won his debut fight on September 11, 2009 when he
defeated Makidi Ku Ntima via TKO in the fourth round.
Nathan Perrot was a good hockey enforcer but he was mediocre in the boxing ring.  He won his first pro fight by TKO in the 4th round against a novice with only one fight/win.  But he lost his next two bouts by TKO in the first round against two first timers!!!  Perrot was knocked down 3 times in the first and only round against future .500 fighter Jon Bolden!!!  Which proove that NHL hockey goons sucks in a boxing ring. 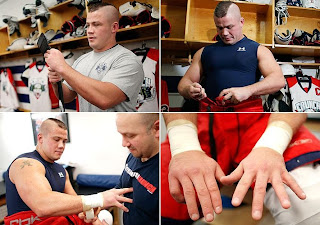 Despite being a spectacular hockey fighter, Mirasty made his professional MMA debut against Sebastian Gauthier losing
in the first round.

In his youth Mirasty competed in boxing and was provincial
and golden gloves champion in 1998 and 1999.

Mentions:
There is also Mike Brault, a long time hockey enforcer, who have a couple of amateur/toughman boxing match (including a loss vs. NHL enforcer Donald Brashear) and maybe one or two MMA matches.  But I can’t find his records anywhere.

So next time a hockey goon dabbles in boxing or MMA.  Don’t be too enthusiast.  Since he will more than likely be a miserable failure.

Randy Orton will be WWE Champion at SummerSlam