“The Black Destroyer” Earnie Shavers is considered by many to be the hardest puncher of all time.  Muhammad Ali, Joe Bugner, Larry Holmes, Randall “Tex” Cobb, Ron Lyle and Ken Norton all credited Shavers as being the hardest puncher they had ever faced in the ring (surprisingly, none of them were KO’d by Shavers).

His right uppercut and cross were his greatest assets.  “The Black Destroyer” compiled an impressive record, winning 44 of his first 47 fights by knockout; mostly against sub-215-pound bums. His KO streak included 28 consecutive knockouts. 20 victories were in the first round. Compiling a career record of 74-13-1 (68 KO) Boxrec His downfalls were his poor chin and his lack of stamina. 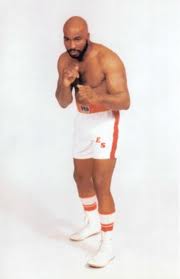 Some people believe that the 6′, 208-pound Earnie Shavers would squash today’s heavyweight boxing division. But some people thinks otherwise.

Read this: http://www.heavyweightblog.com/2318/earnie-shavers-power-puncher-or-overrated-featherfist and you might think otherwise too.  Maybe Shavers is just grossly overrated?

The above link offers you a detailed and objective case study of Earnie Shavers record, career, and accomplishments.