﻿The Rock arm size? Separating the legit from the bullshit.
I hope that this Toby Maguire faggot's action heros era will come to an end. There is some chance since The Rock seems to hit it big on the wide screen these days. Big in both senses of the word. Big in box-office appeal and big for his humongous physical appearance. It was mentioned (source below) that The Rock Dwayne Johnson was 280 pounds with a 54 inch chest and 23 inch arms for Fast Five AKA Fast and Furious 5 (2011)?!?  In my view; like 90% of height, weight and measurements claims around, it is bullshit!!  Exaggeration and/or bad journalism to be polite.

Yes The Rock is now more than ever freaky big and ripped but his arms aren't 23 inches for sure.

Take the look at the two pics below to get an idea of what legit 23 and 24" guns look like. 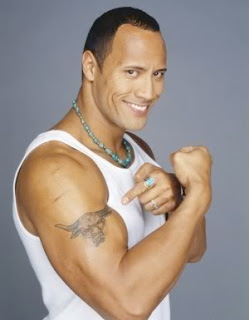 In conclusion, at his biggest, The Rock's arms are about 21 inches. And when he was an Hollywood newcomer they were around 18 inches.