Skip to content
Posted inUncategorized
Posted by By PYGOD July 1, 2013No Comments For the moment, I just wish that it won’t be as long and dull as the last week Raw.

Stupid excrusiatingly boooring crappy wrestlers’s monologues to plug Money In The Bank zzzzzz
Fuck!  A silly speech from the butt-ugly Daniel Bryan…
No!  No!  No!
Thing got worse with the entrance of the albinos Shameus with his orange fluo hair.
Here come Randy Orton…  Here come Kane…  blablablabla…  zzzzz…  Boooring!   Here come Christian reciting his monologue…  A-hole CM Junk with his crappy monologue.  Best in the world my ass!!!!  Blablablablabla…  zzzzzz…. Can you please shut the fuck up!!!  Thankx Daniel Bryan to shut the fuck up of CM Junk!  Then a Randy Orton RKO to Kane.
Thankfully this shitty promo is over.  We lost 15 minutes of boredom on this.

Will this fuckin’ Wyatt Familly finally make their Raw debut?

Yes sir!  The Shield (707 lbs) vs ‘Captain No Charisma’ Christian and The fuckin’ Usos (Did the Usos ever set a foot in a gym?)
Hell Yeah!!  The Shield wins!!  Dean Ambrose got the pin on Christian.

Dolph Ziggler, with no AJ Lee and no Big E. Langston = a Ziggler face turn, vs. yes sir, the 3MB Jinsder Mahal.  Dolph Ziggler wins!  Michael Cole claims it is “a big win”.  LOL 🙂  Then, Ziggler singlehandlely kick the ass of the three air guitar rockstars of J.O.B. Squad 2013.  Deja vu!  But always a good laugh!

Oups!  In the King Fishers series publicity, I just saw a fisher looking like Daniel Bryan?!?  No!  No!  No!

Fandango is back!..  vs giant pasty white albinos Shame-us  Sheamus won by count out when Fandango leaved the ring.  Predictible!

Ryback (291 lbs) vs The Miz with Chris Jericho at the commentator table.  Cryback asked the referee to stop the match due to his injured knee.  The Miz wins by referee stoppage!?!  Interesting scenario, nobody could have predicted that!!

CM Junk & Curtis Axel (w/ Walrus Heyman) vs. Prime Time Losers
Signs of dissention between CM Punk and Curtis Axel.  Nah, I think I will cry!!…  Walrus seems to feast on their discord.  Punk and Axel won!  No surprise here.

Champions of the past: “Stone Cold” Steve Austin and Sting. 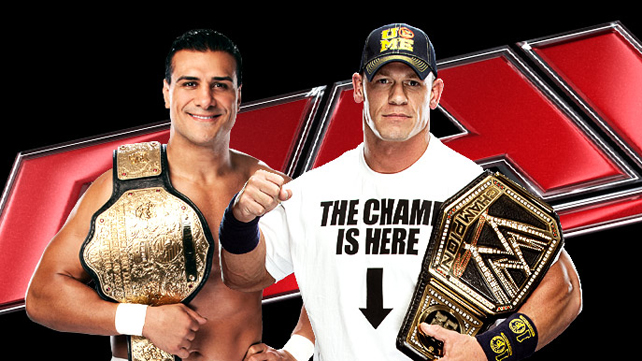 I just hope that it won’t be a Dusty Finish…  22:50 and the match isn’t started.  A Dusty Finish seems inevitable.  No Ricardo Rodriguez here, it’s a good sign…

An excellent Pay-Per-View caliber match.  Thank you Vickie to “give it away for free” as Vince McMahon would say.


Overall it was an really very good Raw episode. The main event Champion vs Champion match stole the show.