Skip to content
Posted inUncategorized
Posted by By PYGOD August 3, 2013No Comments 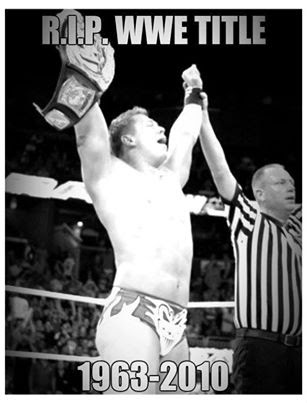 Currently the only three men who are credible WWE World Champions are Triple H, John Cena, and Randy Orton.  In a perfect world; Triple H would be the ultimate heel with his biker jacket and his sledgehammer, John Cena would be the new Hulk Hogan superhero babyface, and Randy Orton a sinister tweener.  Forget about putting the World Championship belt around the waist of undeserving mid-carder (Daniel Bryan, The Miz…) blank rookie (Sheamus, Jack Swagger?!? what a joke) or washed-up going nowhere veterans (Kane, Mark Henry…) just dissolute the value of the once prestigious title.

Enough of this speech of sad but true constatations.  Let’s go for the WWE Hall of Shame list…

﻿
Not only the guy is ugly, redhead, blank, undersized and boring.  In his entry in the federation, Daniel Bryan formely known as Bryan Danielson, was used as a NXT jobber.  Yes, he is maybe the best wrestler in the world right now in term of pure wrestling skills and habilities. It was a real shame that this skilled fighter was mis-used as the worst jobber in NXT.  But with his redhead pale look, blank personnality, absence of charisma, and small size (5’10”, 190 pounds) he just can’t be the World Champion. period.

3- The Miz
Excellent mic skills, promo, etc…  But a World Champion, never in an hundred year?!?..  The Miz fits the bill as a douchebag jerk but didn’t convince me at all as a world champion.

4- Rey Mysterio
Generously billed as 5’6″, 165 pounds but more likely to be 5’3″, 140 lbs as billed by ProWrestlingIllustrated.  The WWE just like any serious and credible wrestling federation doesn’t need a midget to be his world champion.  The silly midget was even given the world title once to honnor the tragic death of drug addict Eddie Guerrero.  During his title “reign”; the midget paper champion was squashed and destroyed by The Great Khali and Mark Henry in non-title matches.

6- Dolph Ziggler
Spirit Squad Nicky World Heavyweight Champion??????????  What a fuckin’ joke!!!  Another 11 minutes 23 seconds of disgrace for the WWE.