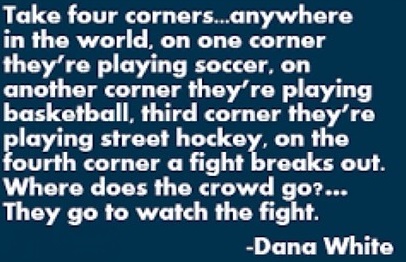 Who is the best fighter in the world?
You will never know!
With restrictive rules it's ain't Combat it's just sport.
Without eyes poke, throat and groin attack. Many Martial Arts lose all their effectiveness.
Fuck The World and choose SLAUGHTERSPORT™ instead.

Forget boxing.  It's nothing but fancy rules, round sets, weight categories and other laughable crap!

Forget NFL.  Yes, american pro football is perceived as a violent combat sport by many. Now the saint-hypocrite NFL is trying to please the mindless sheep society by faggotrizing himself with stupid, none of their fuckin' business shit like Morality Contract and substance abuse program. What the players do outside the football field SHOULDN'T be the NFL nor the medias businesses!!

The sissy players are whining and crying about concussion risks. While the retired players, now penniless, are stealing way too much easy money with their undeserving billion dollar concussion lawsuits / settlements.  These assholes even sue over their past use of painkillers and drugs!!! Even worse, the stupid America's Law Court of "Justice" is giving them everything they want and everything they didn't deserve.

If the trend continues, and it will, in 50 years from now, the sacred formerly manly NFL football will be a no-contact flag football league with overpaid and overpadded sissies. Meanwhile Rugby will remain the only unprotected, full-contact, team sport of the badasses!!! 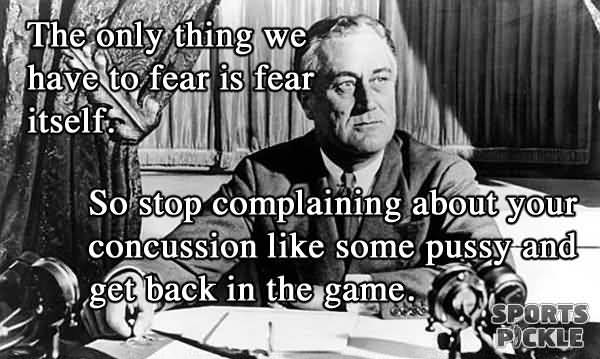 NFL football, hockey, boxing, MMA, pro wrestling...
For all the concussion queers and wimps out there.
I've never heard of a death defying motocross rider complaining about his plethora of injuries.
Learn PERSONAL ACCOUNTABILITY instead of crying!! 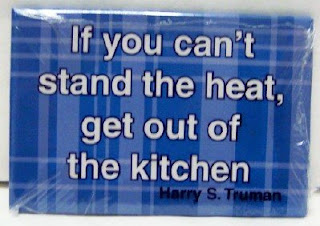 These are my philosophy of Combat Sports resumed in a few very crude words.  My reflection of the actual state of our four main Combat Sports (Boxing, Pro Wrestling, MMA, Kickboxing), hockey brawls, and the sacro-saint sanctified NFL American Football who is seen as a Combat Sport by many.

How can I fix this mess?

After an entire life of watching, following, reading about, then writing and blogging about pro wrestling, boxing, MMA, martial arts, self-defense, bodybuilding, strongman contests, powerlifting, arm wrestling, NFL, rugby and just about any combat and strength sport that ever existed.

After decades of drawing, writing, searching, creating and giving life to hundred of fighters / characters by drawing them and writing thousands of pages of script. Virtually living in a imaginary world!

I came to the inevitable conclusion that the Perfect Fighting Sport Federation, if I can call it that way, must be: 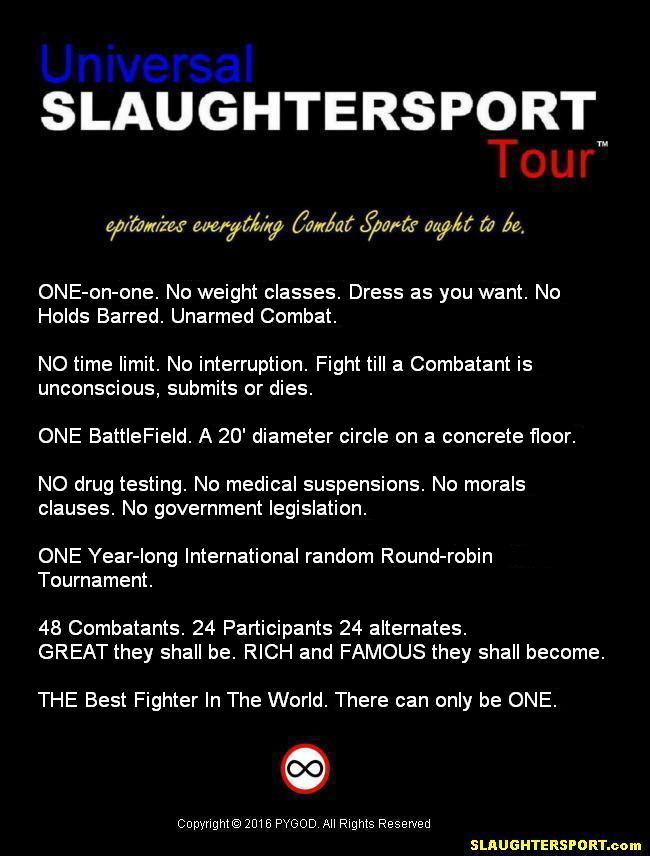 Unfortunately, there is nothing like this in what you call the real world. So I decided to create my own.

From my own world.

Three necessities of the upmost importance for my roster of Combatants.

THE IDEAL NUMBER:
In accordance to the year-long round-robin tournament format. The perfect number of participating Combatants is 24 plus 24 alternates for a total of 48 Combatants. 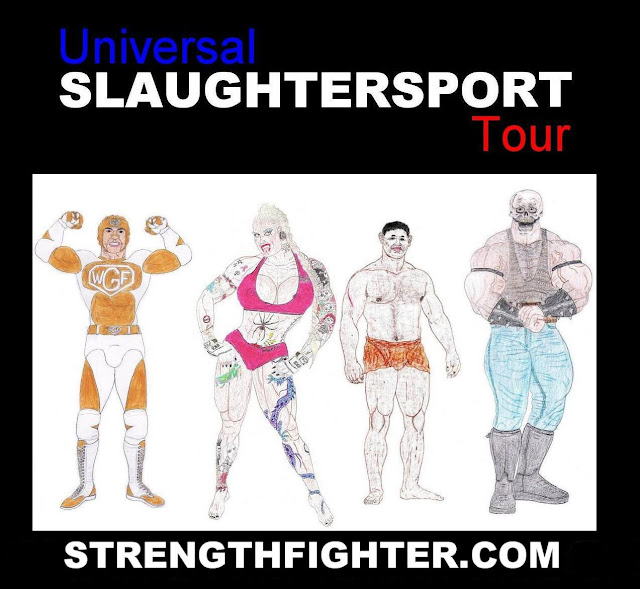 Originally, on UST 1, it was a 4 Combatants tournament / league / federation. Quality over quantity. But it just wasn't enough.
The Originals from left to right: WGF, Andromache, Simson, and The Big Thing. 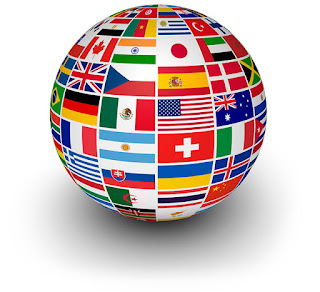 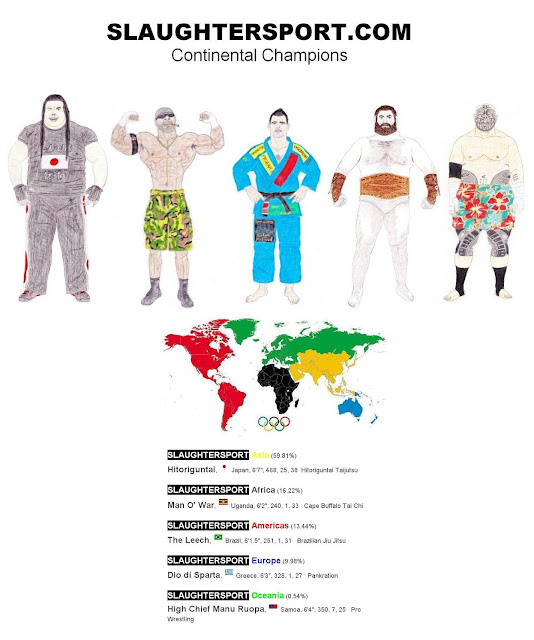 Several fighting styles, genders, nationalities, sizes, and minorities are represented without falling into the unoriginal stereotypes. Diversity in body types, body shapes, skin colors, age, ability, gear, clothing, background, personality, and even blood types. I love diversity! Nothing is more boring than uniformity!
Here are the ethnicities, nationalities, fighting styles, genders, and differences represented on my roster of 48 Combatants (24 Participants and 24 Alternates). 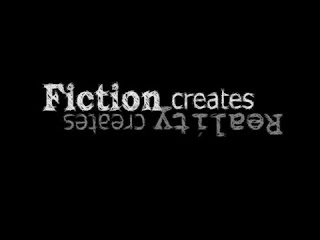 I didn't include anything that wouldn't be possible in real-life. So you won't see any fireballs, fingertip death touch, 80 years old grandpas fighting or kung fu fighters jumping 20 feet into the air here.

With that in mind, I had to funnel down to 48 Combatants and they are ready to invade and take over the world. The real world.

Click on their names for their complete bio, photo and stats.

(alternate are in red) 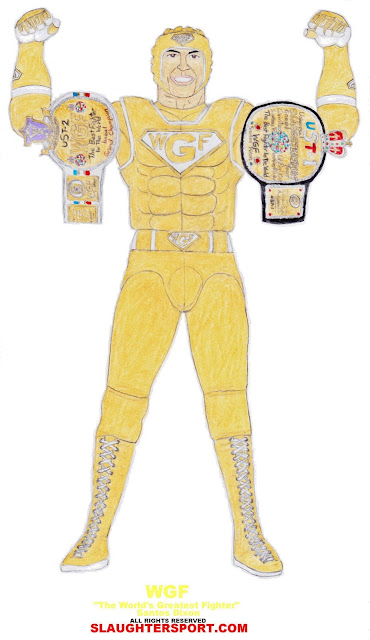 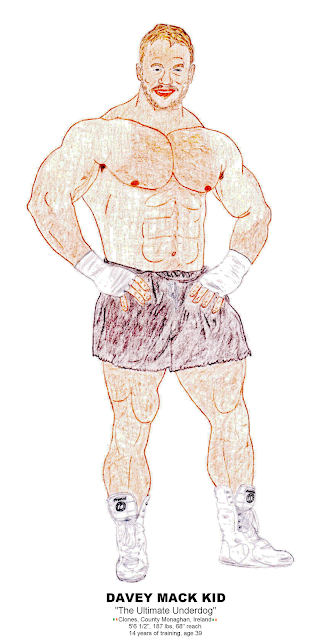 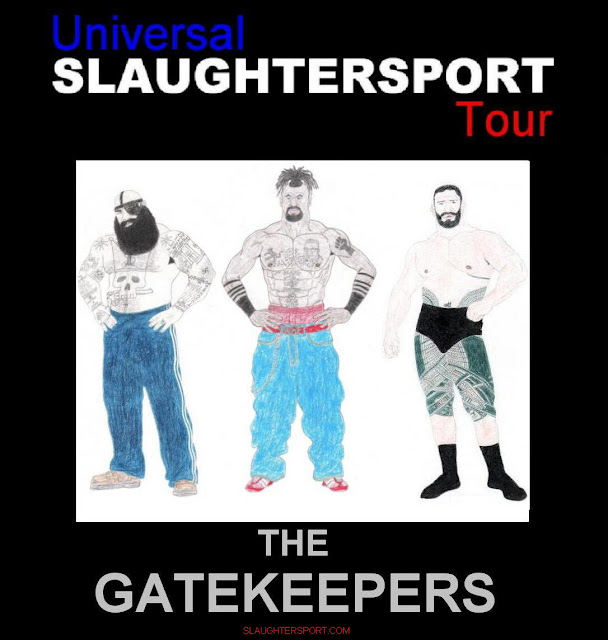 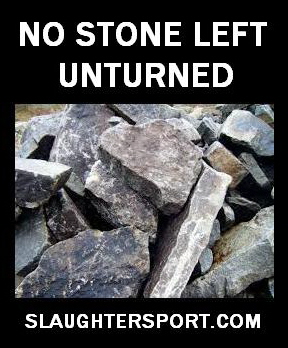 Number of Combatants vs. tournament schedule vs. time of recovery 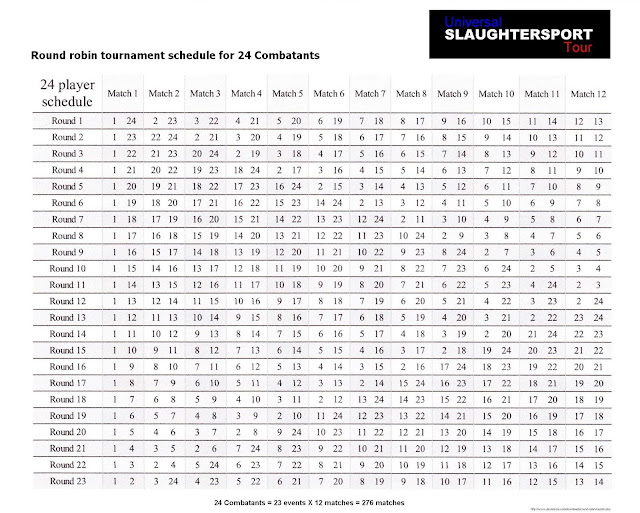 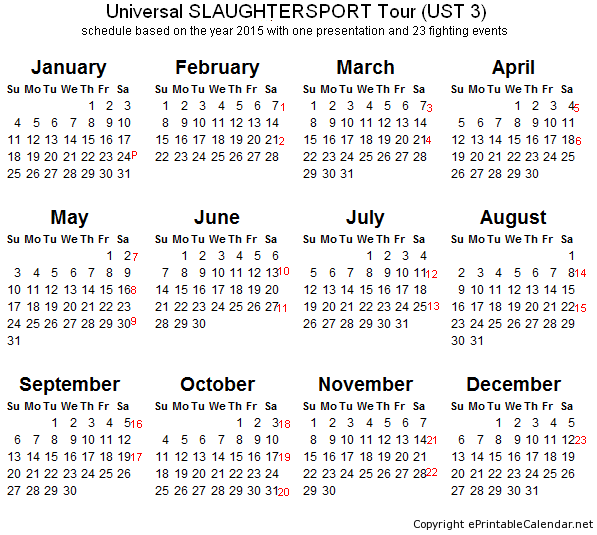 Too good to be real but perfect for a video game, a movie, a comic book...

Do not forget the everlasting popularity of Billion dollar publicly traded pro wrestling company WWE, Boxing, and the ever-expanding UFC...

There is, was, and ever will be a fascination for violence in human society.

Hand-to-hand fighting is the purest form of competition since day one of the history of mankind. 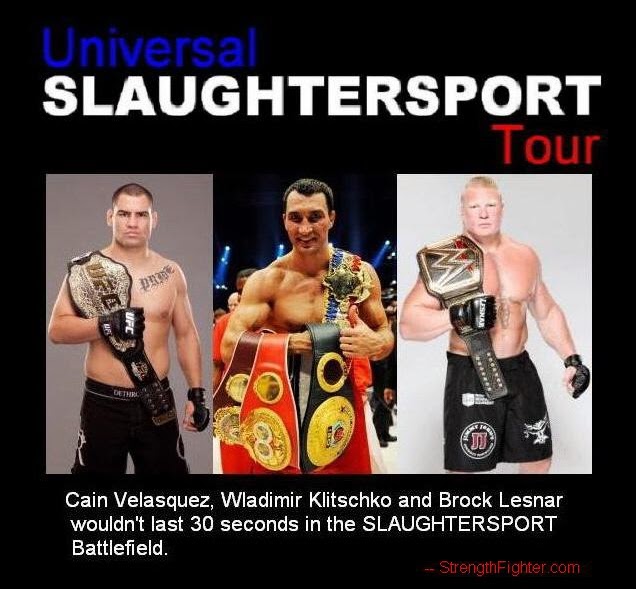 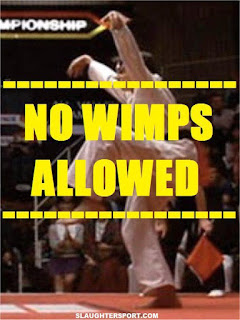 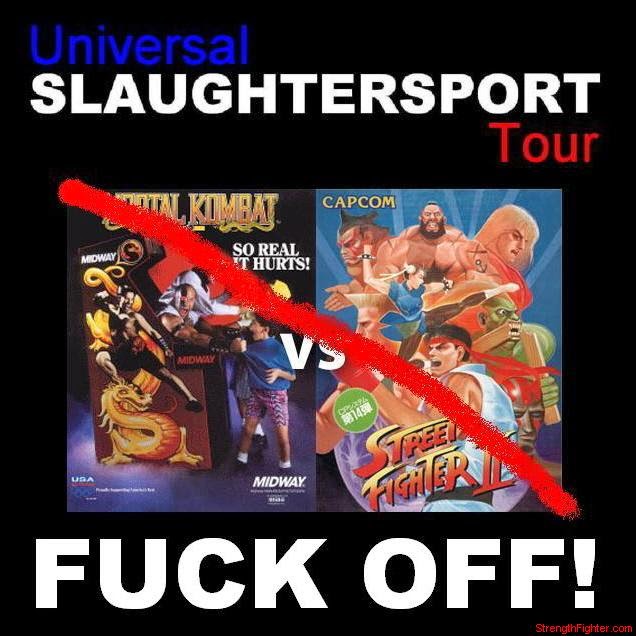 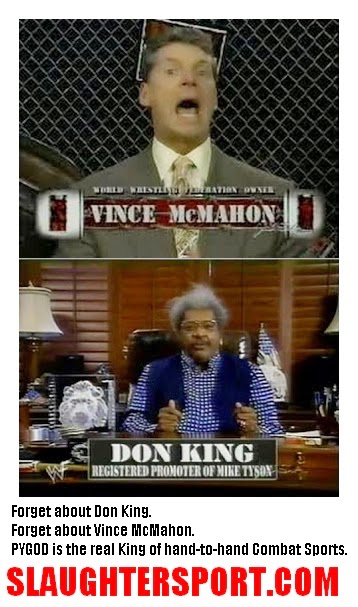 For those interested to a partnership to give life to my work via a video game, movie, figures, comics, etc. Contact PYGOD or leave a comment below.

The Universal SLAUGHTERSPORT Tour™ is waiting for you!


THE BIBLE OF COMBAT SPORTS

And with all that being said. After watching an endless number of martial arts and fighting movies. I realize that the majority of the scripts used for these films are just plain silly, unimaginative, unrealistic, and just plain suck!  And if those unforgetable pieces of crap can find their way to be used in an actual movie with real actors and a lot of Money invested in!!! When you realize that you realize that anything in life is a question of contact and knowing "the right people".

And maybe in this script you will find an overwhelming Promoter, Owner, Creator...

The Promoter, the Owner, the Creator... 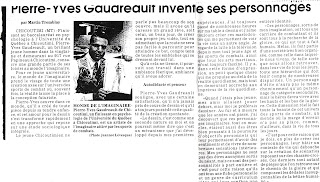 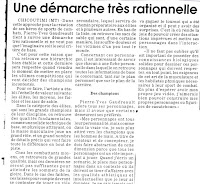 Years later, another newspaper post about my imaginary world of Combat Sports. 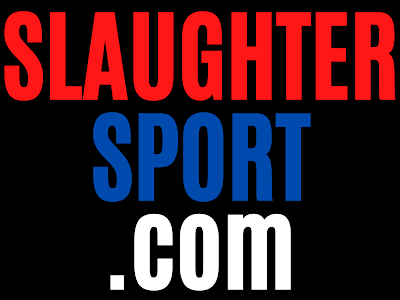