Skip to content
Posted inUncategorized
Posted by By PYGOD April 26, 2015No Comments From 1980, Mid Atlantic Championship Wrestling, Enforcer Luciano challenges Blackjack Mulligan to a Detroit Street Brawl and goes on to break cinder blocks with his bare hands, and eats a light bulb! Luciano was only in the area for about 3 months, but the mobster gimmick never caught on. Blackjack won their matches handily, and Luciano left the area never to return.


The Texas Street Fight was Mulligan’s specialty match, and involved the participants dressing however they wanted and bringing whatever they wanted into the ring. It amazed me how many “foreign objects” that Luciano could cram into his clothing. He had nearly everything on him but the kitchen sink. Despite chains, brass knuckles, powder, etc. Luciano never got on track against Mulligan. It became clear after a couple of minutes, that this would be a slaughter and Luciano’s swan song in the Mid-Atlantic area. After wearing the Enforcer down, Mulligan took one of his cowboy boots off, flung Luciano into the ropes and smashed him in the head with the hard boot. The Enforcer was counted out, and Luciano proceeded to lay flat on his back with his arms and legs spread out wide for a good five minutes. The image of Luciano laying in the middle of the ring for so long has always stayed with me. To this day, when I see anyone in any sport get a real butt-kicking, I remember the Enforcer on this night and think to myself that they didn’t get laid out nearly as badly as Luciano did! Needless to say, Enforcer Luciano was never heard from again after this Texas Street Fight!


Buster Guillotine Gordon, in which persona he somehow snagged the cover of the Wrestling Revue issue with Jeff Walton’s great report on Stevens’ win over Sammartino in S.F., and is immortal for being voted by the Japanese wrestlers the worst gaijin to ever wrestle in Japan of all time (which, as I always say, is hardly fair, as he may also have been the worst gaijin to ever wrestle OUTSIDE Japan, either).


Everybody seem to blast Enforcer Luciano as a shitty worker and talker. But personally, I do enjoy his gimmick. And yes, those knuckles look legitimately swollen!

Enforcer Luciano was Charles Weir (real name) and he wrestled under these aliases: Buster Gordon, the Enforcer, Evil-Eye Gordon, Evil-Eye Valentine, Guillotine Gordon, Jimmy Valentine, P.J. Higgins, and Sonny Love. He was not missing an eye! He was from Detroit, Michigan, USA. 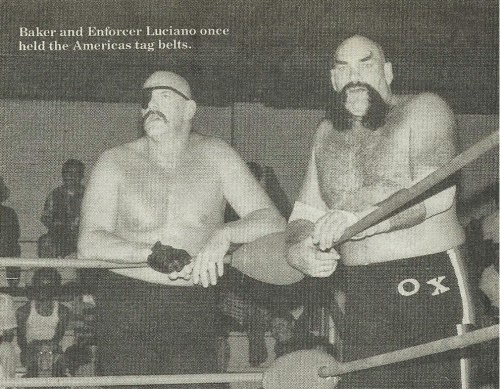