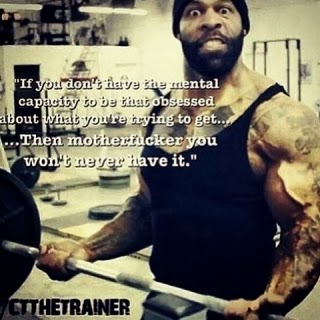 NB: Strict curl dictates that your head, back and arse
must be in contact with a wall at all times during the movement – he
claims to lift over 300lbs without the wall.


He later explained that “this was my attitude in 1992 when I thought I was the best on the planet.”

(Eating cheeseburgers instead of steroids!!)

He would eat anything and everything “in order to be the biggest,
baddest motherfucker on planet earth. I wanted to stop traffic, I wanted
to crack the sidewalk with every step”.

His lunch consisted of the same meal every day for 20 years: 4 Big Macs, 4 fries, 2 shakes and 4 apple pies.

Citing the sheer quantity of cheeseburgers as his substitute for steroids:  “I would eat those cheeseburgers, because I thought I needed it
in order to keep up my size. Instead of taking steroids I would eat. I
would over-eat and eat anything.”

Despite what he said, eating piles of cheeseburgers instead of using steroids, just look at him.  The guy is a lean and mean muscle freak.

“Having spent hours trawling through endless forums and credible websites”, bodybuilding author Julian Fletcher (not related) answer is “at some point he must have taken steroids”.

Yet, despite technically dying on the operating table three times and
requiring 24 hour care, he refuses to give up bodybuilding.

“I hate complainers, I hate criers. If I can come in here with a
metal valve implanted in my chest, taking 10 different medicines just to
stay alive every day to do my work out, you have no excuses. So no
matter what – your nose bleeds, it’s that time of the month, the kids
are crying, you don’t feel like it, your back hurts, you’ve got aches
and pains, it’s STILL your motherfucking set!”