One day, in the early 1900,
German superstrongman Herman
Goerner stated that there is three tests of
strength.

The former world record in the Clean and Jerk was 266.0 kilograms (586 lb) by Leonid Taranenko of the Soviet Union. However this weight is not considered a world record by the International Weightlifting Federation, since all the old records were annulled after a restructuring of weight classes. 6′, 321 lbs, 32 years old at the time of the record.


The record for a raw deadlift (a deadlift performed without the aid of a deadlift suit, where only a weight belt is allowed) is 1015 lbs by Benedikt Magnusson. This lift currently exceeds the equipped record. Benedikt holds the current deadlift world record, lifting 1,015 pounds (460 kg) at MHP’s Clash of the Titan’s IV, April 2, 2011. He was 6′, 380 lbs, 27 years old at the time of the record. 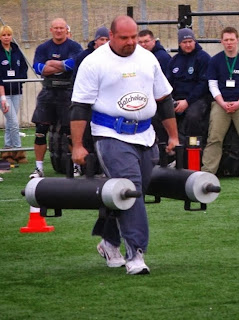 The previous record was 7.55 sec and was achieved by Zydrunas Savickas (Lithuania) on the set of Lo Show Dei Record, in Milan, Italy, on 14 April 2011.

The farmer’s carry event is seen in many of the strongman competitions today. For years, it has been a common event at competitions of all levels. In this case participants held a weight of 150 kg in each hand and walked in a straight line for 20 m.