Skip to content
Posted inUncategorized
Posted by By PYGOD May 11, 2014No Comments 1 of 5 “world” heavyweight champ, the other 4 “world” titles (WBO, WBA, IBF and Ring Magazine) are all held by the hardest puncher in boxing history Wladimir Klitschko. Oups!

Next step, if Don King didn’t get on his way, Wladimir Klitschko will squash Bermane Stiverne to unifie the 5 World titles.

Vitali Klitschko , Wladimir‘s brother, was named WBC Emeritus champion after he’s fully dedicated to his political career in Ukraine. Vitali is 42-year-old veteran who announced his presidential candidacy in the kaotic Ukraine in October, 2014.

And as his record attest and as you will see in the match. Stiverne has one hell of a punch.

Despite his impressive looking boxing record (24-1-1, 21 KO’s) Stiverne legitimacy is contested. Almost half of his opponents since turning pro in 2005 had a losing record and he only had one 10 rounds and two 12 rounds bouts before his championship fight.

Take a look at his boxing record. 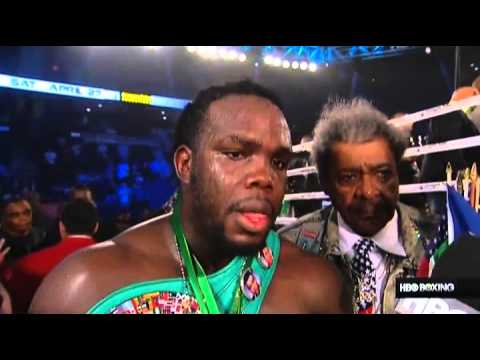 Congratulation to my fellow Canadian citizen!