Skip to content
Posted inUncategorized
Posted by By PYGOD December 17, 2017No Comments

“Arnie has a tremendous sex drive. There are women who come over. He is not lonely. He has female companions… He does have a lot of needs and he believes it is all part of the fitness. Five times a day is a good number. A lot of women won’t do that, but he is in great shape.” – Tom Arnold

True Lies co-star Tom Arnold told Daily Star magazine that his mate Arnold Schwarzenegger has sex five times a day with a harem of women – to keep in great shape.

Here are some of the best Arnold sex quotes:

Most of these quotes come from his 1977  interview with Oui Magazine .

“I get laid on purpose. I can’t sleep before a competition and I’m up all night, anyway, so instead of staring at the ceiling I figure I might as well find somebody and fuck.”


“Having chicks around is the kind of thing that breaks up the intense training. It gives you relief, and then afterward you go back to the serious stuff.”


“I learned my lesson. I had several harassment lessons … I know now what can be said and what can’t be said … Now I would not even tell someone I like their outfit. It could go south.”


“I hate pants. This is something I have inherited from my father. He despised pants, and my mother was never allowed to wear them at home. We’re talking about a different time period now, when the man was much more the ruler of the house. But I still feel that way, and neither my mother nor Maria is allowed to go out with me in pants.”

Here is the grand finale, a fucking gem of an excerpt about gangbanging girls at Gold’s Gym in the 70’s:

“Bodybuilders party a lot, and once, in Gold’s–the gym in Venice, California, where all the top guys train–there was a black girl who came out naked. Everybody jumped on her and took her upstairs, where we all got together…But not everybody, just the guys who can fuck in front of other guys. Not everybody can do that. Some think that they don’t have a big-enough cock, so they can’t get a hard-on.” 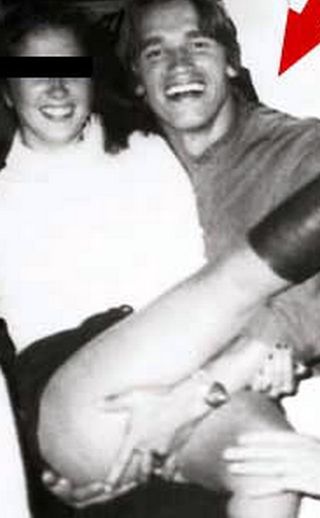 
The only two things that you can abuse in life. Drinking water and jerking off.


You should jerk-off at the very least once a day to be in good physical and psychological health.


Arnold Schwarzenegger is a the ultimate self-made man and the ultimate overachiever. Most likely the best blend of Brain and Brawn that you can get.


Arnold Schwarzenegger is a Centimillionaire movie star, successful businessman, best bodybuilder ever, politician, high testosterone sex driven serial fucker… He has it all! He did it all!


What else to say?

The Undertaker through the years