Skip to content
Posted inUncategorized
Posted by By PYGOD January 28, 2018No Comments At the XFL press conference, Vince McMahon clearly stated that he will looks for “quality of the human being is going to be as important as the quality of the player” and that the XFL won’t have any players with criminal records. “Even if you have a DUI, you will not play in the XFL.”

Which is foolish in my view, I hope this is just PR bullcrap to appeal his target niche audience. Because if not, Vince would simply refuse to sign past peak but nonetheless good NFL players just because of their troubled pasts?!!?


NFL players, just as pro wrestlers, are badasses by definition. And as we all know, badasses are not all goodie two shoes role models in real life. So if VKM only wants immaculate football players, that’s eliminate a lot of potential good players from his roster.


With his limited financial ressources and his in-the-making status, the XFL isn’t in any position to refuse any valuable player whatsoever.


Whether we like it or not, the XFL will be a B-football league just like the CFL. A league with a roster of NFL wash-ups and not-good-enough for the NFL. In this position, you must be open to everything and you cannot afford to be picky.


Now the questions are:


Is Vince McMahon’s WWE pro wrestlers entertainers are all quality human beings without any criminal records nor DUI infractions?


Would WWE entertainers be clean enough to play in the XFL?


Now let’s look at the current WWE roster and the WWE Hall Of Fame if there is only “quality individuals without any criminal records not even DUI”. 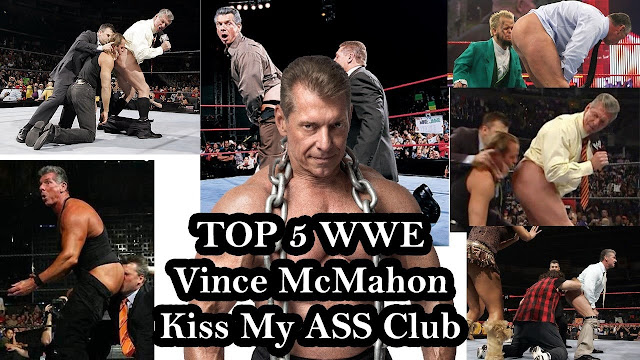 There is no photoshop here, the Vince McMahon Kiss My ASS Club really existed… But only as entertainment purpose during the WWE Attitude Era.

As you can see, many of the most celebrated the WWF/WWE superstars, and the boss himself, are really far from being choir boys.


Moral of the story.

In resume,
With all due respect, I think that you should wipe your ass with your conduct policy!!!

As the savvy Billionaire promoter extraordinaire that Vince McMahon is, I bet that his “quality of human being” picking will get lost in the stuffle sooner than later. Hopefully… It’s a necessity if we ever hope to see some big names playing on the XFL field.