Skip to content
Posted inUncategorized
Posted by By PYGOD July 12, 2013No Comments I just hope that it won’t be as dull as the last week Smackdown!
It will probably be another boring info-pub to plug Money In The Bank!

BEURK!  This motherfucker Daniel Bryan!  No! No! No!  Oups!  Christian will probably job tonight!  The new Christian T-shirts are so lame!
Daniel Bryan vs. Christian
Daniel Bryan defeated Christian by tap-out submission.  It was previsible!  After losing to Randy Orton, Kane, and now Daniel Bryan.  We can say that Christian is the designated top-tier jobber.


The Miz vs. Ryback
Cryback defeated The Miz despite his left knee “injurie”.


Things were perfect til a stupid backstage interview by Shame-anus plugging the damn Sunday’s Money In The Bank.


Oh no, Teddy Long is in the ring talking shit!
It’s the in-ring Divas Championship match signing of Champion AJ Lee and Kaitlyn.  With the entire diva roster in the ring, a grand total of 7 girls.  AJ Lee entertained us til Kaitlyn had enough…  Kaitlyn trashed AJ and slapped Big E. 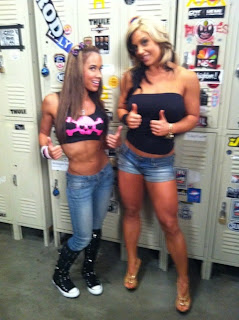 These girls are smokin’ HOT!!!!


Wade Barrett vs. Fandango
Wade Barrett let himself distracted by the crap outside the ring and Fandango got the quick pin victory.
A very short match intended to plug the poor’s man MITB ladder match with Team Rhodes Scholar and Zeb Colter’s xenophobe bunch arguing outside the ring.


From The Vault:
Greg “The Hammer” Valentine vs. The Warlord (July 1991)
Warlord got the victory by pinfall.
Wow!  Warlord was so damn huge and lean!  What a physical specimen!
I love this from the vault matches, maybe the 90s wrestling was slow-paced and less spectacular than todays wrestling.  But it remind me the good ol’ time!  I love it!


World Champion Alberto Del Rio vs. Sin Cara
No need to watch the mismatch!  You know in advance that ADR will squash his 180-pound personal jobber Sin Cara.
Oups! Cancel the project.  Sin Cara actually manhandled ADR????  Oh goss!!  It was more than likely Dolph Ziggler under the Sin Cara’s mask and costume!!  The “match” is most likely a no-contest.

Excuse me, the extremely annoying Vickie Guerrero screaming unintelligible things.  Thankx Teddy Long for calling the security to escort the crazy witch out of the building.  Much to the delight of the rowing crowd.


Sheamus vs. Randy Orton
The ugly troll Daniel Bryan tried to steal the show entering the ring with a ladder while Orton and Sheamus were crawling outside the ring.  Sheamus running wild when he saw Bryan climbing to the top of the ladder.  Then Christian ran into the ring and all those dumbasses are trying to climb the ladder and grab the empty, worthless briefcase.
Randy Orton finally RKOTFO Daniel Bryan, climb the ladder, and grab the symbolic briefcase.
Another shameless Money In The Fuckin’ Bank plug!

The match was probably declared a no-contest.  Who knows?


Overall, this week WWE Smackdown episode was good and enjoyable.