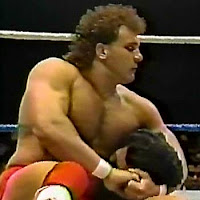 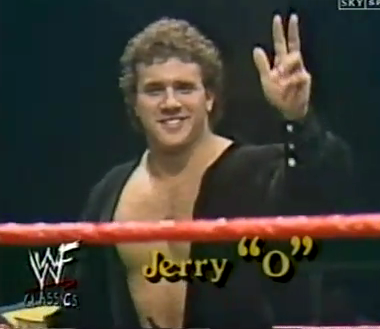 Steroids Usage: Dave Meltzer reported in January 1996 “Arotsky’s name is all over the Zahorian fed-ex lists and if this is true, that makes three known Zahorian “patients” that passed away in 1995 alone, Eddie Gilbert and John Studd being the other two.

+ May 7, 1995 when he won the old Southern (now USWA) title in the Memphis circuit from Randy Savage.

I remembers first seeing Jerry Allen a Saturday morning on TV in Lutte International.  He was teamed with a pure jobber against the muscleman Steve Strong (one of my favorite at the time) and The Great Samu (The Headshrinkers in the WWF with Fatu aka Rikishi).  The short period of time Jerry Allen was in the ring.  He was giving trouble to Steve Strong.  Even the TV commentator was impressed by this “6’4″, 250 pounds new comer”.  But Jerry Allen sealed the dismissal of his team by tagging with his scrub tag team partner.

Then, around the same time, I’ve witnessed Jerry Allen and another jobber getting mercilessly squashed by Don Muraco and “Cow Boy” Bob Orton (Randy’s father).  A pure one-sided squash match with Jerry Allen giving no offense at all and getting beat up like a rag doll.

I remember talking with one of the kid at the schoolyard about how Jerry Allen shown a lot of potential manhandling the 290-pound Steve Strong in Lutte International nonetheless getting beat up on a weekly basis in the WWF???  We were really confused about the situation.

At the time, I nicknamed Jerry Allen “Le Plus Fort Des Faibles” which translates as “The Strongest Of The Weaks”.  Strong because he was solidly built but weak because he was still a pure jobber getting his ass kicked every week.