Skip to content
Posted inUncategorized
Posted by By PYGOD June 25, 2013No Comments Dusty Wolfe aka Dale Wolfe have it all.  He was pale, fat, ugly, pudgy and couldn’t find his way out of a paper bag.  Absolutely blank, zero charisma, zero personnality.  Nothing!  Just good enough for a good laugh!
Dusty Dale Wolfe was not only jobbing in the WWF, he was also a regular loser on WCW tv shows.
In 1987, Dusty Wolfe worked part time in the World Wrestling Federation… Early 1989: Dusty Wolfe became a full time employee of the WWF, until 1991 when he was let go… Dusty Wolfe worked part time for WCW from 1995 until late 1998.
Here below, Dusty Dale Wolfe is losing to fellow pure jobber Omar Atlas.  It’s very weird to watch this match and see those guys having some kind of offense.

See all the jobbing dexterity of Dale Wolfe while he is getting destroyed by Sid Justice / Sid Vicious / Sycho Sid. 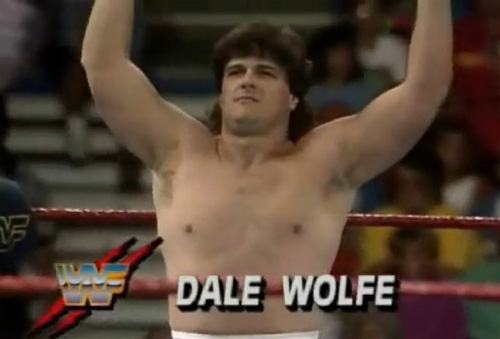