Cage from Daisy Of Love, I used to hate this short-fused douchebag so much.  He came out on the 2009 MTV’s Daisy of Love show with his bogus MMA trailer park championship belt.  Always bragging that he fights and trains 6 hours a day since the age of 5.  He was just a short-fused wasted drunk who got a well-deserved ass-kicking by Flex.

Check out his official Daisy of Love cast bio.

Aric (Cage) Aric “Cage” is 25 and lives in Hollywood, California. He’s a cage fighter who started doing martial arts when he was 5 years old, and claims he used to be a part of a gang where they paid him to pick fights with other people. He got cheated on by his last girlfriend, and now believes that Daisy is the solution to all his problems. 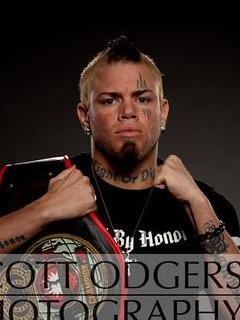 Of his 5 losses, he tapped out 3 times and was TKO’d twice.

In resume, Aric Nelson is a bottom feeder fighter in the MMA world who only faced, and most losed to bottom of the barrel MMA bums.  So the “World Championship” belt he proudly displayed on the Daisy of Love show is nothing more than tacky, fake, and worthless.  For more proves, go take a look at his official below .500 MMA record. 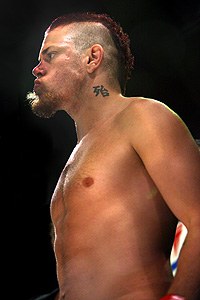 Google ☞Aric Nelson☜.Yes its really me.MMA Hangin out in Las Vegas in the VIP. Pro party animal! Pro Cage fighter, TV star. Reality TV, Vh1,G4,Mnsbc,Truetv ect
As you can see, Aric places ‘Pro party animal’ before ‘Pro Cage fighter’ as his choosen professions.  Unfortunately he can’t make a living out of being a ‘pro party animal’.  However I’m an 100% sure that he is better at being a party animal than a cage fighter.
https://twitter.com/Vh1Cage
http://www.facebook.com/vh1Cage

Take a look at Aric Cage Nelson showing off his talent while getting pummeled by Clay “Heavy Metal” Harvison. That the result of over 20 years of training 6 hours a day 365 days a year. 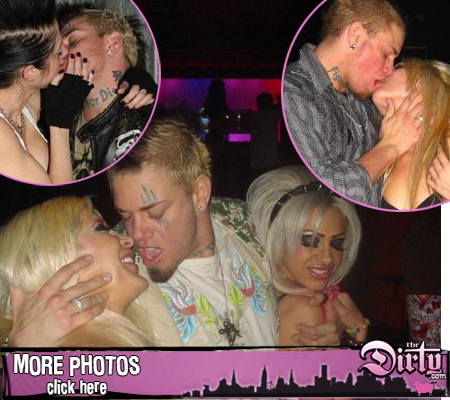 My hat off!  At least the guy know how to party!
It seem that I’m not the only one who dislike this mascara wearing douchebag.  Check at the below copy-and-paste from the dirty army dotcom.
THE DIRTY ARMY: Nik, Aric Cage Nelson= Daisy of Love, MMA Fighter, Vegas Club Hopper (no real job) Host…… Lives in Las Vegas Nevada. Parties Every Night! He has a Wife Tara Nelson…. he f*cks random b*tches, a new girl every night, doesnt like condoms, knocks girls up & loses their #s once news surfaces, dirty dirty dirty. He is a dead beat, loser, has a coke problem along with being an alcoholic. Cries all the time like a puss and has some Mental issues. Threatened to hit a girl in her face over $4 … he is wack! Watch out for this dirty loose cannon.
The title is No One Can Stand This Las Vegas Douchebag and it was published on October 10, 2011.        http://thedirty.com/2011/10/no-one-can-stand-this-las-vegas-douchebag/

Aric ‘Cage’ Nelson is a good illustration that being a pro athlete didn’t go hand in hand with partying and drinking every night.

Kevin Nash The Russian The Punisher