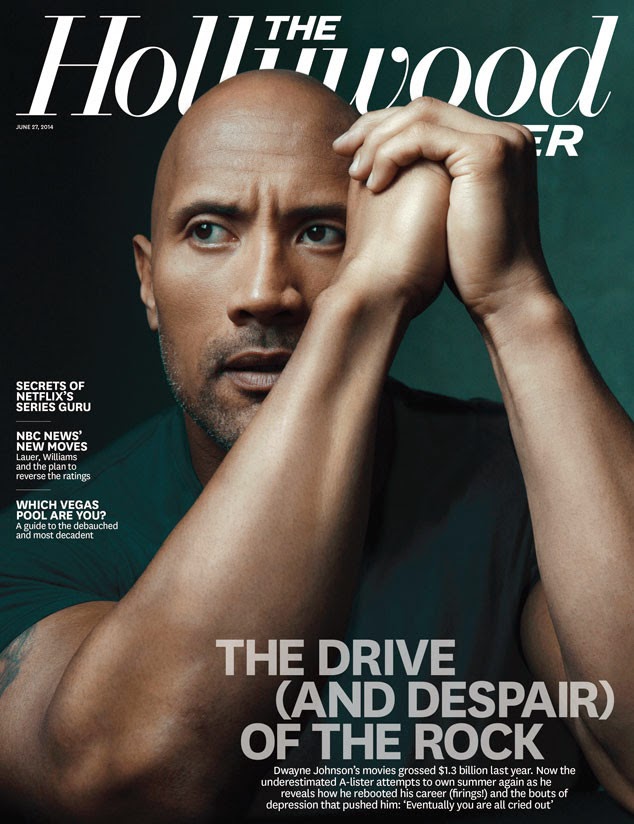 Dwayne "The Rock" Johnson opens up about his battle against his worst opponent, depression and overcoming the "absolute worst time" of his life.

As a teenager, he was a angry, gangly youngster who got in trouble with the law at age 14. He lived with his mother in absolute poverty.

Eventually, Johnson became serious, bulked up and attended the University of Miami on a full football scholarship at 18. But during his freshman year, Johnson succumbed to numerous injuries, which led to further depression. "I didn't know what it was... I didn't know why I didn't want to do anything. I had never experienced anything like that."  It was his first battle with depression at age 18.

"You reach a point where you are all cried out."

Johnson's dream of becoming an NFL player was crushed when he wasn't picked in the draft, but he went on to sign with the Canadian Football League. At the time, Johnson lived in a two-bedroom apartment with three of his teammates, where he slept on a filthy mattress found on the street. When it felt like things couldn't get worse, Johnson was released from the team. "There was no injury," he recalled. "It's just, 'That's it. You're not good enough.' That was very sobering."

The incident led to Johnson's first split from his girlfriend Dany Garcia (who eventually became his wife and manager.) "The dreams I had, they're dashed,"  "There is no more football. My relationship was crushed. That was my absolute worst time."

Johnson said the breakup brought him to an even lower place. Explaining his mental states.

Eventually, Dwayne Johnson turned his life upside down, joining pro wrestling were he eventually became The Rock, one of the biggest draw of all time. Then went on to became a mainstream Hollywood actor. Several millions dollars later, the rest is history.

However despite his money, fame, and success, The Rock wasn't unsinkable. Johnson says he fell into a deep depression following his 2008 divorce after 10 years of marriage  to college sweetheart Dany Garcia. Which he fell he is entirely accountable for the failure of his marriage. The Rock said: "Once I manned up and became accountable for the mess I was in, that's when it hit me... What kind of a dad does this make me? What kind of a man will I now become? Failing at marriage and as a husband was a heavy thing, and divorce had that special way of knocking me on my ass."

Nonetheless the former lovers still work together and stand strong on their resolve to stay amicable and dedicate the rest of their lives together as friends for the sake of their 12-year old daughter. A rare thing in and outside of Hollywood! My hats off to them!

Dany Garcia is also his manager and runs every aspect of his business. Her brother is Johnson's producing partner and Garcia's husband is his conditioning coach. It must be weird to be coached by the husband of your ex-wife?!?

Anyway, it take a lot of maturity and mutual respect to stay that close after a divorce.

In resume, WWE legends and A-Lister Dwayne "The Rock" Johnson hits rock buttom 3 times. The first time at 18 when he sustained several injuries during his college football years. The second time when he was sacked from the CFL (Canadian Football League) for not being good enough. And the third time, when he divorced from his college sweetheart Dany Garcia.

After his three bouts with depression, The Rock doesn't fell immute against it. The fact that the collosal and highly successful Dwayne "The Rock" Johnson suffered from depression is just one more proof that anybody can suffers from mental illness and breakdowns during their life. And more importantly, no matter how deep the depression is. THERE IS ALWAYS A LIFE AFTER DEPRESSION. As long as you are alive, you're winning!