Skip to content
Posted inUncategorized
Posted by By PYGOD July 21, 2019No Comments 10 Wrestling Gimmicks That Were All About The Money

By: Stephen Randle
Thursday, February 4th, 2016
Source: sportingnews.com
There have been a lot of shockingly rich people in professional wrestling, and not just the guy who owns the company. People who have so much money, we kind of question why they even bother wrestling at all. Surely, people with that kind of money would prefer to spend their time doing something that doesn’t involve getting in knockdown, drag-out fights on a weekly basis. But wrestling doesn’t always have to make sense, and with that in mind, presented for your consideration are the 10 wrestling characters who we judged to be the most filthy rich of the bunch.
Just to make it clear, this is not a list of wrestlers who are actually rich in real life. We’re not accountants, finding that information would be incredibly difficult, if not impossible, and this is more fun, anyway.

Honestly, we’re not sure if they ever specifically said that Regal is rich, but he’s clearly British royalty. You’d have to think he has a manor house somewhere in England, filled with priceless works of art and antique furniture, right? They don’t hand lordships out to every halfway decent UK musician and actor who wants one, after all, it’s not like a knighthood. According to Wikipedia, even the lowest rank of lord still involves a certain level of wealth through land ownership. It’s possible that Regal is only a Baron, which would be the lowest rank of Lord, and is usually a more hereditary title. However, that seems unlikely, as he clearly outranked Robert, the Earl of Eaton, which would mean that Regal has to be at least a Marquess, and more likely a Duke. Yes, we totally looked up the official ranks of English nobility in order to make this point. The bottom line is, Regal clearly had some sort of money even when he came to WWE. As General Manager, he had a silver tea service, after all. Those things aren’t cheap. 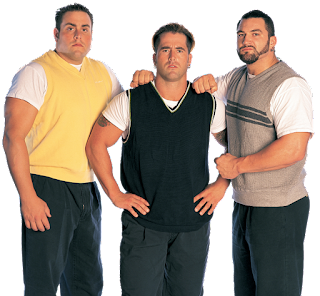 The whole point of the Mean Street Posse was that they were those silver spoon jocks that you hate, who don’t actually play real sports and are in horrible shape, but are still just large enough to be able to bully you and get away with it. They’re not “real” bullies, they’re the kind of bullies you get when everyone’s so rich that anyone who weighs a certain amount and acts aggressively is considered strong. That’s why, whenever they came up against a real wrestler, they got their asses kicked. Besides, the Posse were close, personal friends of Shane McMahon, and you know that you’d have to be fairly wealthy to get noticed by the son of the guy who runs his own wrestling promotion. Also, we’re pretty sure there’s a minimum wealth requirement in order to even live in Greenwich, Connecticut. In fact, the wealth of the Posse is what inspired Faarooq and Bradshaw to create the APA, when they offered to pay them for protection from whichever member of the common rabble happened to be beating them up that week. 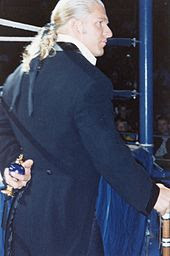 Speaking of rich guys from Greenwich, we have to wonder if anyone remembers that Triple H’s billed hometown is the most ridiculous example of continuity in wrestling, as it’s pretty much the only remaining tie to his debut character in WWE. The other thing would be what Triple H actually stands for, which nobody ever mentions anymore. Yes, before he was The Game, the guy who legitimately lives in Connecticut now as part of the McMahon family, he was Hunter Hearst-Helmsley, the Connecticut blueblood, who presumably had ties back to European royalty. Which makes Hunter a combination of two examples we’ve already covered: wealthy member of the English gentry and someone who can afford to live comfortably in Greenwich. In fact, he was so rich that marrying Stephanie McMahon might have actually been considered marrying below his station. You know, if he hadn’t stopped caring about being a rich snob and started acting like a wacky degenerate/ridiculously intense guy at the time. 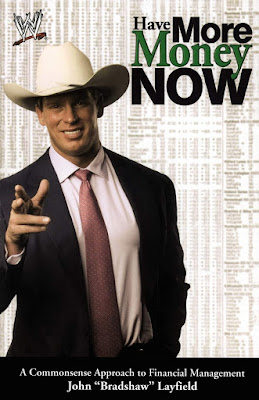 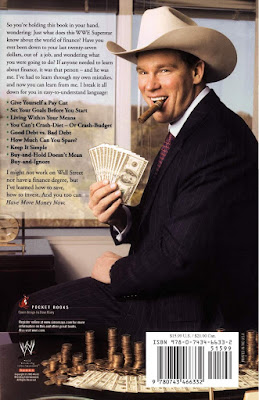 The guy is literally the Rich Texan character from The Simpsons. Sure, we know that in real life, he makes a comfortable living trading stocks, but we’re pretty sure most day traders don’t own personalized limousines with bull horns on the front. JBL was so rich that at one point, he was paying half a dozen wrestlers to work directly for him. Sure, they were all losers like Orlando Jordan, but we’d imagine he’d be forced to pay wages that were at least competitive with WWE salaries. Probably higher, too, because signing on as a member of JBL’s cabinet tended to mean you were getting your butt kicked on a regular basis. Plus, Orlando Jordan was briefly the United States champion, which has to be worth a pay bump, right? And let’s not forget that at WrestleMania 21, he had money rain down from the ceiling for his entrance. Frankly, the character of JBL is so rich we’re not sure why he bothers showing up to do commentary every week. In fact, we’d like to take this opportunity to encourage him to stop doing so. 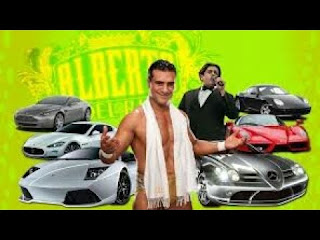 He’s so rich that noted racist JBL doesn’t mind that he immigrated to America, which should give you an idea of how absolutely loaded Alberto Del Rio is. As if the constant stream of high-end luxury cars and the personal manservant weren’t enough of an indicator. Sure, they tried to undercut his wealth by having someone point out that Del Rio’s cars that he drove to the ring every week were rented, but have you ever rented a Rolls Royce? If anything, it’s more costly to rent a luxury car every week than own your own fleet of cars. The insurance alone would be ridiculous, especially after Sheamus stole one and took it on a joyride. There had to be some penalties paid after rental places saw that happen. Sure, he doesn’t drive fancy cars or have a servant now, but that’s probably because his financial advisor finally got hold of him and told him to stop wasting quite so much money on stuff that was in real danger of getting destroyed every time they appeared in WWE (yes, we’re talking about both the cars and Ricardo). 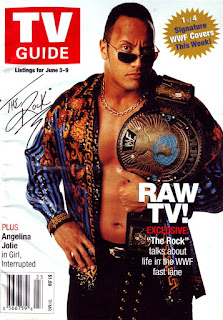 Before he left WWE and became a huge movie star, The Rock was already living the high life. Even when he was part of the Nation of Domination, at a certain point it became all about The Rock wearing $500 shirts and giving everyone in the stable a new Rolex. Plus that nice commissioned portrait that he gave to Faarooq! That couldn’t have been cheap to make, especially since it was one of a kind. It’s a shame Faarooq saw it as a challenge to his authority and it got destroyed. We’re not sure if there was an official story about where The Rock got all his money from initially, but since his family legacy was always in play, we’re going to assume it was one of those situations where his family was rich (presumably from their years of playing barely literate savages in professional wrestling organizations around the world) and he was living off of that. Or maybe it was a subtle way of suggesting that he took money under the table while he was a star football player at Miami, before the entire world started realizing that they should actually be paying college athletes. Whatever the case, those shirts and watches don’t come cheap, and neither does that Cadillac that Austin destroyed with a monster truck. Man, cars have a rough time in WWE. 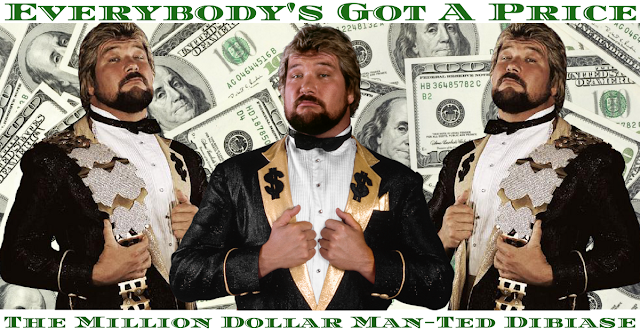 If not for inflation, Ted DiBiase would top this list. Alas, a mere million dollars doesn’t buy what it used to anymore, but back in the day, it was enough for DiBiase to buy everything he ever wanted. He bought Andre The Giant’s services from Bobby Heenan in an attempt to steal the WWE Title, he bought the #30 spot in the 1989 Royal Rumble (okay, it was never actually proven, but we all know he did it), and he bought himself an entire stable of wrestlers in the mid-90’s. Okay, sure, nobody’s really paying top dollar for Nikolai Voloff or Kama the Supreme Fighting Machine, but those are still expenses. And let’s not forget, DiBiase was the proud owner of a black manservant the most expensive title ever produced, the diamond-studded Million Dollar Title. That was just what he wore as his belt! Plus, for most of his WWE career he even had the taxman, I.R.S. on his side, so he wasn’t losing any of that money to Uncle Sam. 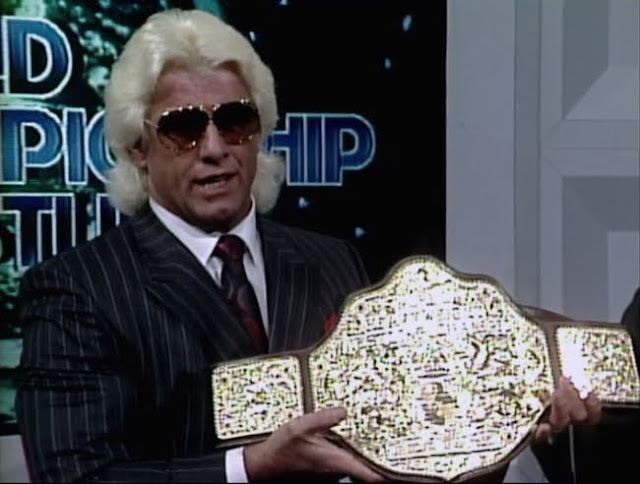 The catchphrase says it all, Ric Flair was a limousine riding, jet flying son of a gun. He lived the high life in and out of the ring, at every opportunity, and he never shied away from showing off his vast wealth. There were the diamond-studded robes, the $5000 suits, the expensive watches he gave out to his fellow Horsemen, the list of high-priced accessories that Flair would trot out on a weekly basis was endless. And after WCW folded, Flair caught on with a mysterious consortium of wealthy businesspeople, who purchased Shane and Stephanie’s shares in WWE to make Flair temporarily part-owner of WWE, right after it had gone public and made bundles of money. Whereas in real life, living like Ric Flair would, hypothetically, leave you paying off multiple alimony settlements and back taxes, reduced to selling your vintage title belts on eBay and even wrestling for TNA just to make a quick buck, on-screen, Flair never lost a step as he aged, bringing a taste of what had made him a massive success to the stable known as Evolution in WWE. 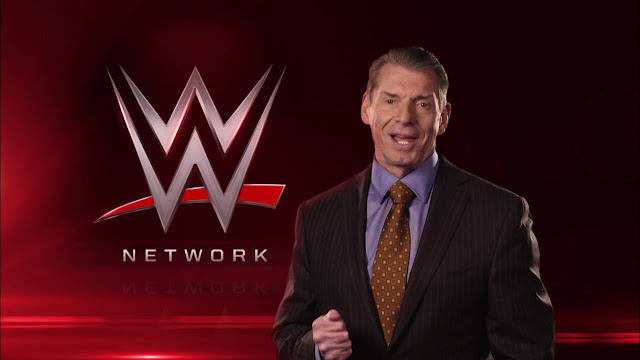 Well, obviously. Mr. McMahon is Vince playing a slightly exaggerated version of himself who is evil all the time (unlike the real Vince McMahon, who’s only evil roughly 63% of the time), but in either incarnation, he’s stinking rich. He owns the company, the wrestlers, and when he’s particularly annoyed, the fans in attendance as well, somehow. Mr. McMahon has so much money that he gave away a million dollars a week to random people on the Internet in horribly painful segments that only ended because a sign fell on him. He’s so rich that after he made a bad decision to sell Raw to Donald Trump, he bought it back the next week for twice what Trump paid, even though the stock price had dropped that week (due to idiots believing Trump had actually purchased WWE), so the company was actually worth less than before! So, maybe not the best businessman in the world, but definitely one of the richest. Look, it’s right there in the name. He’s a billionaire, and since CM Punk made it clear during his infamous pipebomb that Vince is only a multi-millionaire who should be a billionaire, then clearly, WWE’s cruel parody of Ted Turner actually outranks Vince on this list. Admittedly, Vince can be a billionaire depending on the stock price this week, but Ted Turner was so rich that his wrestling company was only ever profitable for two years of its existence and he didn’t even notice. No wonder Vince was insanely jealous of the man, to the point that he started a campaign attempting to get wrestling fans to start petitions to block the AOL-Time Warner merger and created a character that claimed that he had massive daddy issues and wanted to destroy WWE by any means necessary.
Original link: https://www.goliath.com/sports/10-wrestling-gimmicks-that-were-all-about-the-money/
Tags:
gimmickrichrich heelrich heel gimmickWrestling
Last updated on June 29, 2021

GIRL GETS SLAMMED ON HER NECK *VIOLENT*

How To Take Creatine