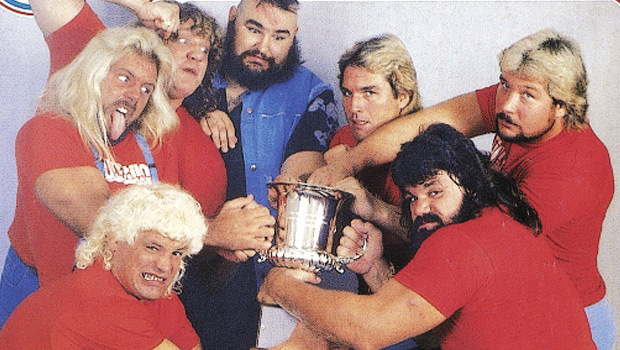 An RF video shoot interview resume written by Andrew Lutzke and published on May, 2015 on culturecrossfire.com
Original link: http://culturecrossfire.com/wrestling/kayfabe-lies-and-alibis-back-to-the-territories-the-uwf-with-hacksaw-duggan-and-jim-cornette/#.VbKKFKR_Oko

This is a roundtable Q and A featuring Skandor Akbar, “Dr. Death” Steve Williams, Bill Dundee and Brad Armstrong. Sadly three of these men are no longer with us.
Bill Watts is the first subject. Akbar explains that Bill Watts bought a promotion that had issues with no shows and other rules being broken, so he became a disciplinarian.
Bill Dundee said Watts had a few strict rules and you best just follow them. Dr. Death was fined for wearing football shorts into the ring during a card. Dundee was fined for letting him wear them since he was acting as the agent for the office that night.
Brad Armstrong says the pay was outstanding but the travel was brutal.
Ernie Ladd would come into the locker room, take off his pants, give the guys their finishes for the night, then put his pants back on and leave.
Ladd was fined for fighting off the Rock and Roll Express while on his knees during a tag match.
Guys would often pay the driver of the car they were sharing .02 a mile for the trip.
Ricky Morton once had a handkerchief tied to his boots, somehow it got wrapped in the rope, Morton jumped off the top rope and splatted on the canvas.
Buddy Landell was a bullshitter but a fine worker.
Kamala kept kayfabe around the security force at the New Orleans Superdome – Once while being taken by golf cart from the underbelly of the dome to the arena entry the cart suffered a broken wheel. Kamala refused to get off the cart and just kept screaming at the guard in “Ugandan” moans and patting his belly. Dundee and Watts came by with a new cart and Kamala still refused to budge. Watts spoke “Ugandan” to Kamala and convinced him to come along. The guard asked what Kamala was talking about and Watts told him that Kamala thought the guard looked tasty.
The first time Jerry Lawler and Jerry Jarrett gave Sugar Bear Harris the Kamala gimmick, Lawler did the body paint work on him. Harris thought the moon on his chest was a banana and was greatly confused.
Kamala did big business in most of the places he went in the 80’s.