Skip to content
Posted inUncategorized
Posted by By PYGOD July 28, 2013No Comments

Soviet Bloc
BILLED FROM: parts unknown
Lived in Rochester, New York, USA during his stint in the BKB and hated to be isolated and away from his family. Lives on his three-generation family farm since his birth with his mother, siblings, wife and children.
PRO EXPERIENCE:  6
AGE:  33
STYLE: Size & Strength (formerly billed inappropriately as Street Fighting or Pro Wrestling)

— Winner of the PHYSIQUE competition

— Second in the FIGHTING 4-man, one-night, round-robin tournament with a record of 1-1.

Was born as a 6.8 kg (15 lb) baby.
His grandfather was a giant and a farmer for 40 plus years.
His father, also a farmer, was 6 feet 9 inches and 550 pounds and super strong. His father died of an heart attack at 55 years old while working on the farm.
His mother is 5’11”.
Had uncles of exceptional stature too.
His younger brother is also a full-time farmer and a world class strongman competitor.
Began weight lifting at 8 years old because his father made him train.
He started working the farm at age 9, when he was already the size of an adult.
He was naturally over 350 pounds before he started using steroids at 23 years old.

FIGHTING TRAINING:
Nine months of boxing training with Lou Reid — the world champ’s trainer and Hall of Fame trainer — before entering BKB around the age of 32.
Haven’t trained ever since in fighting. Instead he continued to train like a powerlifter, lifting weights 3 hours a day. He exclusively does strength training, chores and farm work, and punching bag.
In preparation for UST 2, The Big Thing was scheduled to be train by the JMC brothers (MMA fighters) but he never showed up for one session.
His limited yet effective repertoire doesn’t require anything except size and strength. Which he has in abondance. Stamina is his only weakness.

FIGHTING STRATEGY: Seek & Destroy.  Bullrushing, chasing and punching his opponent at the oppening bell for the early KO.  Always exciting to watch for the crowd.

Due to his lack of stamina, he got to beat all his opponents in less than five minutes.

The Big Thing always goes for the early kill, bullrushing and punching his opponents.  For the first 20 seconds, he can dominate anyone in the world with his extremely aggressive blind chase-and-punch method.

For the first 90 seconds of the bout, he expends so much energy trying to finishing off matches in the first moments of the match that if he fail, he barely have enough left for the long haul.  But he still is very dangerous in this period: an uppercut is a sure one-hit knockdown; three uppercuts = the fight is over;  two consecutive overhand punches will knock down anybody) until he punches himself exhausted, then he becomes a defenseless target until he quit from exhaustion after five minutes.

Predictable: just stay out of his way for the first 90 seconds until he punches himself exhausted.

From 90 seconds to 5 minutes mark, he gets tired, his blows are more manageable and does less damage.  Against smaller opponents and runners, he is unable to close the distance.


Past 5 minutes mark: He is completely exhausted. He will just lie down in need of oxygen. He will be too exhausted to fight another match in this event.

He only has 5 moves but he’ll destroy you pretty quickly if you’re not careful.

If he caught his opponent with a lariat, a big boot, a falcon punch, a choke-slam or a power bomb.  The match is over and his opponent is sent out on a stretcher.

Billed at 7’0″, 405 lbs, The Big Thing is a huge, big muscular engine of destruction impervious to any offense, impossible to knock off his feet, the biggest body attacks has no effect on him and could shake off the most effective finishing maneuvers like it was nothing.  The Big Thing’s only weakness – eyes rakes.

As if that wasn’t enough of a challenge, The Big Thing wears a chainmail vest, spiked wrist guards, a weightlifting belt, and a metal mask into the Round Cage which protect his head from just about any kind of offense.

The Big Thing is an incredibly marketable fighter due to his look, his enormous size, his wild brawling style and his worldwide notoriety.

PRE-SLAUGHTERSPORT FAME: He was a World’s Strongest Man competitor, a World Champion pro wrestler, and a BKB champion. He became an actor while in the BKB.


Thanks to his world’s record arm size and his humongous physique, he always stood out. Earlier in his strongman career, and now more than ever, his body measurements, his strength in several gym lifts, and his performances in strength sports competitions were chronicled in muscle magazines.

ACTING: Appeared in a couple of movies and some television cameos. He usually play the role of an underground fighter/pro wrestler or a bodyguard/enforcer.


His biggest role to date was the starring role in an horror movies playing himself.

Earlier this year, a huge box-office action movie was released starring The Big Thing once again playing himself, but this time as the main antagonist in a deadly fighting tournament.


FAME: With “World’s Greatest Fighter” Santos Dixon, The Big Thing is the biggest star in SLAUGHTERSPORT.  Despite his limited skills, The Big Thing is an incredibly marketable fighter due to his look, his enormous size, his wild brawling style and his worldwide notoriety. He is arguably the top star in fighting sport history.


Still command fees of $25,000 for 90-minute personal appearances, he did ads for several products, appears on TV shows, and there is several action figures of him.


Extremely popular, arguably more popular than The World’s Greatest Fighter for some time.


PERSONAL LIFE: Unlike many fighters, The Big Thing is a loner by nature and isn’t into partying. When he was on the road, he wasn’t a party guy and stayed to himself preferring the gym and his hotel room to the bar scene.

He lives a quiet life on his Sofia, Bulgaria’s farm with his family.

AFTER SLAUGHTERSPORT:  He returned working on his family farm full-time.  Quit juicing, still eating like a horse, still doing strength training.  Without steroids, he is a little bit fatter but bigger than ever.  His weight climbs to 458 pounds, his arms grows to an ice cold 27.25 inches, his chest grows to 66 inches (170 cm) and is still able to bench press 705 pounds raw, unassisted and with strict form.  He is still doing some acting gigs and strength exhibitions from time to time.


HIS DEATH: Despite being drug-free for the last couple of years, decades of Performance Enhancing Drugs (PED) abuse, overeating and his massiveness took a severe toll on his health and he died of a heart attack at 46. 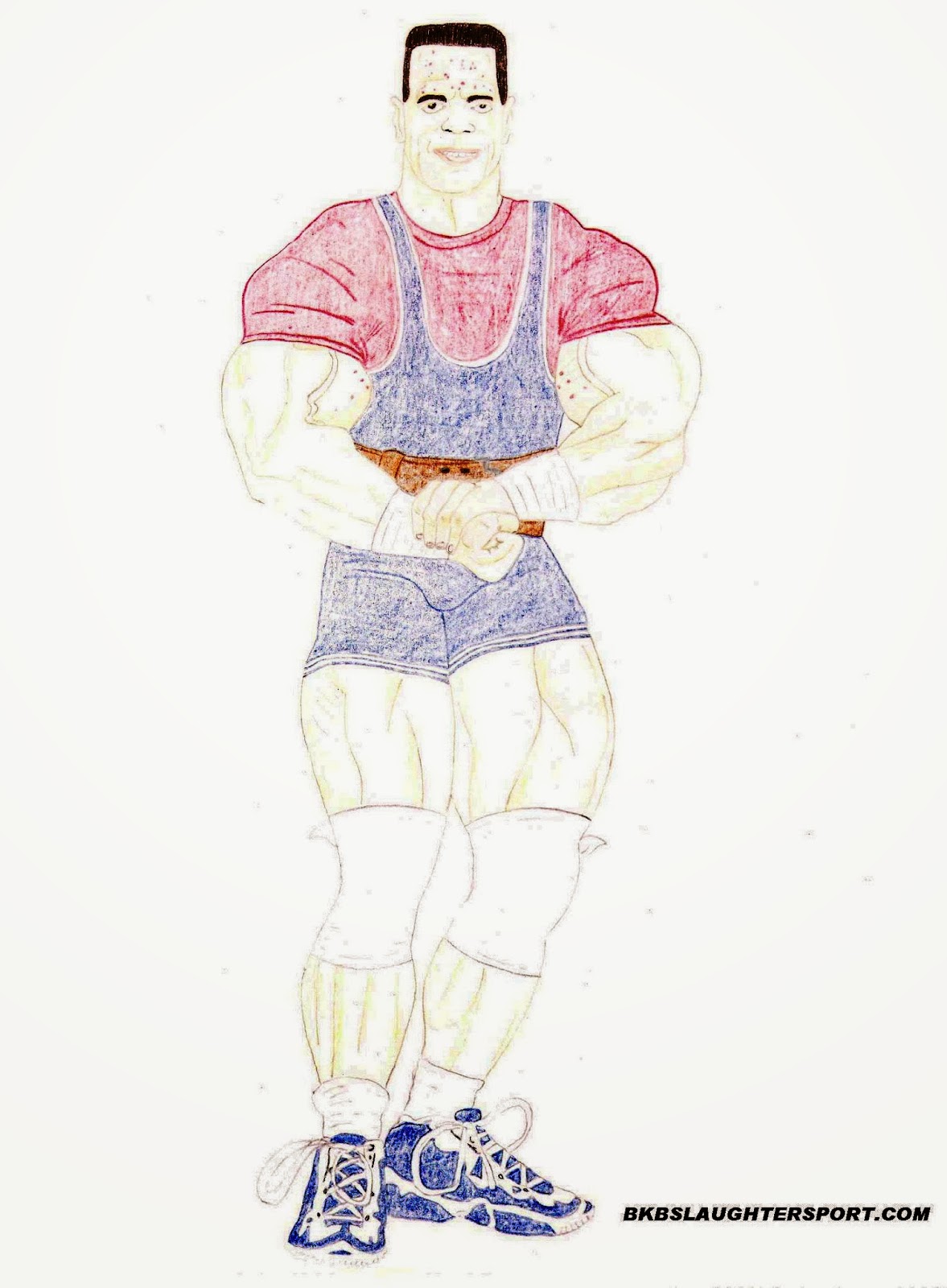 From Sofia, Bulgaria, raised on a farm and was a full-time farmer before he started his fighting career at 26 years old under his given name Viktor Krastev nicknamed “The Eastern Block Monster”.  Already 6’9″, 365 lbs with 26.25″ with a background in bodybuilding, powerlifting, and strongman. Krastev was mainly a World’s Strongest Man competitor dabbling in pro wrestling.  Ironicaly enough, the 27 years old Viktor Krastev got his first mainstream appearance when he was squashed in 1:23 by the man he will eventually replace as the BKB kingpin, Alfonso Alderson.  He then competed in the late QCUK as a mid-carder.

Re-invented himself as The Ultimate Power Machine aka UPM.  6’9″, now 382 lbs UPM became a champion Pro Wrestler and was The Big Thing in the old SLAUGHTERSPORT.  His ultra-power fighting style was efficient, entertaining, and effective.  He was extremely popular with the fans.  With the fall of SLAUGHTERSPORT, UPM took a break from the fighting sport to finally resurface in BKB.  But his lack of flexibility, athleticism, and stamina was a huge handicap in the BKB.  UPM was a much more effective full-contact fighter than he was a stand-up BKB brawler/boxer.  Despite very careful booking, BKB executive Vinnie Massaro failed to build him as an undefeated & invincible monster squasher as he was supposed to be.

A couple of month later, he resurfaced under a skull mask as The Big Thing.  This time, through careful matching and biaised referees, Massaro achieved his initial goal.  The Big Thing became one of the biggest star in BKB.  An over-paid, ultra-popular BKB star with a carefully manufactured BKB record of 37-0.  He was also known as BKB Master.

The Big Thing is the exclusive property and creation of PYGOD
SLAUGHTERSPORT™ is 100% created, operated, and owned by PYGOD
No graphics, text, icons, names, logos, scripts, scenarios or photos from this site may be used without permission.