Skip to content
Posted inUncategorized
Posted by By PYGOD March 24, 2013No Comments Videos: World Champion Bully Ray reveals The Hoax and the Rise of The Aces and Eights

Now that they got their own tv commentator Taz, their own backstage booker D’Lo Brown and most importantly, the TNA Wrestling  World Heavyweight Champion Bully Ray.  What’s next for the Aces and Eights?

NEXT PROJECTS FOR ACES AND EIGHTS:

* Getting a celebrity into the group ala NWO’s Dennis Rodman. Zakk Wylde would be the perfect choice.﻿ 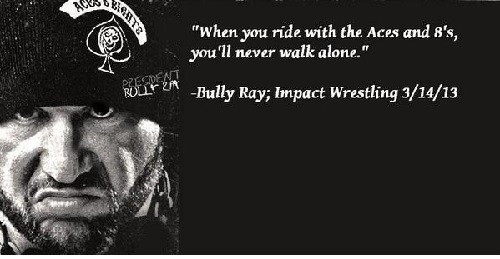