Skip to content
Posted inUncategorized
Posted by By PYGOD January 8, 2013No Comments Sabu is a daredevil, reckless, careless, suicidal, homicidal, genocidal high-flyer/hardcore brawler who put his body on the line night after night for the sake of giving multitude of “holy shit” moments to the fans. But unfortunately for us all, Sabu is also another great wrestler who was buried by WWE. 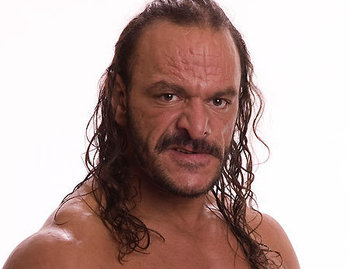 His reckless, brutal wrestling style led him to an astounding catalog of injuries. Including broken ribs, a broken jaw, broke both hands, breaking his neck twice, several deep barbed-wire laceration scars (particularly on his stomach), blood infection, hundreds of stitches, and a forehead full of scars.  And more impressively is the fact that Sabu keep on wrestling despite all those injuries.

After a botched triple moonsault, Sabu broke his jaw against a table but taped it shut and finished the match. After he broke his neck, he kept wrestle with a neck brace. At Born To Be Wired, his classic hardcore “Barbed wire” match vs Terry Funk, early in the match, Sabu suffered a gruesome bloody laceration to his arm, he taped the wound with duct tape and continued the match. Then he got 150 stitches in the locker room to close the wound. Sabu is a real, one of a kind warrior. 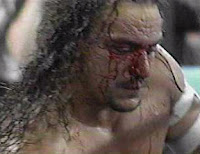 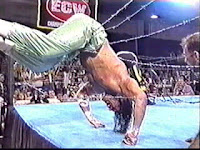 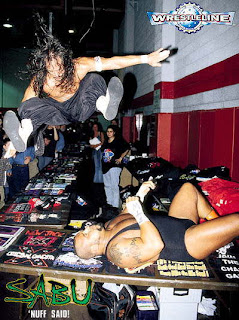 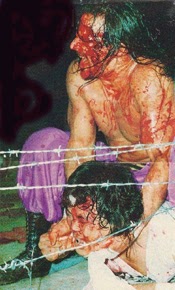 Tribute to the most suicidal genocidal homicidal death defying of them all! I hope you will enjoy it!

Best Of Sabu With Song Riot – 2:12
Best Highlights Of Sabus Career Of ECW