Skip to content
Posted inUncategorized
Posted by By PYGOD June 2, 2013No Comments Brad Rheingans
The guy is said to be “One of the best amateur-wrestlers of all time and under the top 5 wrestling coaches in the world.”  But he was used as a worthless jobber, at least in the WWF circa 1987.
This Brad Rheingans guy is a very accomplished amateur wrestler.  He was an NCAA Division I All-American (1975), NCAA Division II Champion (1975) and a member of the Olympic Games team (1976 placed fourth, 1980 didn’t competed because of the U.S. boycott)… and a WWF jobber in 1987.  Oups! 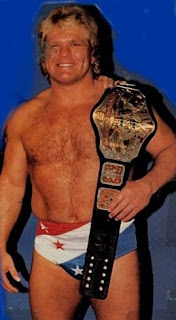 Nonetheless, Brad Rheingans found some success in AWA and Japan.﻿

MMA’s answer to S.D. Jones: Bob Sapp
…at least, Bob Sapp was hot for a while.
Bobby Heenan Next Superstar Jobber, Sivi Afi
Even worse than S.D. Jones and Bob Sapp combined, Paul Dose
Winless Wrestlers
Salute to the Jobbers