Skip to content
Posted inUncategorized
Posted by By PYGOD November 12, 2013No Comments A good start, we are watching the last week hellish beating that received Big Show courtesy of The Shield and Randy Orton.

Randy Orton blah blah blah zzz…  Skip forward.  Randy Orton said he is in charge til brown nose Brad Maddox said otherwise.  Then Corporate Kane came out and said he was appointed Director Of Operation.  Then the fuckin’ annoying and ugly Vickie Guerrero came out yelling shit as usual.  I wish that Corporate Kane choke-slam the shit out of both of them.

The England crowd is fabulous.  They are very loud and had a priceless touch to this show.

Handicap match: WWE Champion Randy Orton vs. WWE Tag Team Champions Goldust & Cody Rhodes
The overmatched Randy Orton wisely backed off and escaped with a count out loss.  Ouups!  The Big Show’s music.  Big Show destroyed Randy Orton by choke slamming him through the announcer table.  Where is Corporate Kane?  Where is The Shield when you need them?

Los Matadores & Santino Marella vs. The Union Jacks aka 3MB
That’s the first time ever, and probably the last time, that we heard 3MB chants.  Nice to see that I’m not the only 3MB fan!  What a fuckin’ shame!  Fagtino Jobberella got the pin on Jinder Mahal after a Cobra finisher???  The Union Jacks / 3MB sinked deeper into mediocrity getting squashed in a couple of minutes versus an unlikely trio.

Dolph Ziggler vs Intercontinental Champion Curtis Axel
Finally a damn championship match!!!  After losing week after week to all comers, Curtis Axel finally got a chance to lose his undeserved (and worthless) title.  Curtis Axel defeated Dolph Ziggler to keep his title.


Why a scrawny clown like Maddox would dare to argue with a fearsome giant like Corporate Kane???

Handicap match: World Heavyweight Champion John Cena vs. the 507 pounds of The Real Americans
Zeb Colter is really great on the mic…  “Let’s go Cena!  Cena sucks!” Superman John Cena submitted Antonio Cesaro with a STF.  Nothing realist here!  How can a single man could defeat two men the caliber of Cesaro and Swagger at the same time?  Nonetheless, Alberto Del Rio tried to amputate the injured arm of John Cena til Big E. Langston came to save his ass.. arm.


Accompagnied by Curtis Axel, Paul Heyman in the ring seated in a wheel chair with a neck brace, an arm in a sling, a trunk cast, a crutch, and his left leg in a cast. Ah ah ah!!  Thankfully, CM Punk came in to stop Heyman’s verbal diarrhea, disposing of Curtis Axel to get his hands on the fat rat Paul Heyman.  Kicked him out of his old man’s chair/cart and beated him with a kendo stick.

3-on-2 Handicap match: The Shield vs. CM Punk & Daniel Bryan
I can tell you in advance that The Wyatt Family gonna get involve in the match.
Indeed The Wyatt Family came to save the asses of The Shield.  But instead of running into the Vanilla Midgets combo of Punk and Bryan, they clashed with The Shield.  (face turn for The Shield?)

In another of numerous shitty and unlikely to happen in real-life scenarios.  Instead of leaving the place, CM Punk and Daniel Bryan stupidly climbed back in the ring waiting to get their asses kicked by The Shield and the Wyatts???  WTF?  But the dreaded Usos and Gaydust & Cody Rhodes stormed the ring to save their sorry asses! 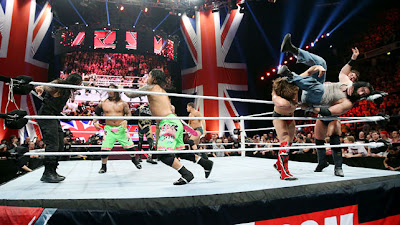