Skip to content
Posted inUncategorized
Posted by By PYGOD December 25, 2013No Comments On June 25, 2008, he returned to wrestle Orlando Jordan in Barcelona, Spain defeating him in a match booked by the Italian Nu-Wrestling
Evolution promotion.

During an April 19, 2008 Nu-Wrestling Evolution (NWE) event in Madrid, Spain, Warrior was presented with an award celebrating
his professional wrestling career in front of over 15,000 attendees. During the
presentation, NWE Heavyweight Champion Orlando Jordan mocked a
fan of Warrior’s, resulting in a heated argument between Warrior and Jordan. As
a result of the exchange, a match between Warrior and Jordan was scheduled for
June 25, 2008 in the Palau Municipal d’Esports
de Badalona in Barcelona,
marking Warrior’s first match in nearly 10 years. After much hype, On June 25,
he finally made his much anticipated return to pro wrestling when he faced
Jordan for the NWE Heavyweight Championship. Warrior promoted the show on his
website and trained with Rob Van Dam during the summer. Notably, the match
lasted over 12 minutes – the Warrior executed a top rope flying body press and a
top rope superplex and defeated Jordan with his signature clothesline/shoulder
tackle maneuver, but was visibly winded throughout the match. After winning the
match and the NWE Championship, Warrior spoke to the crowd for a moment and
immediately vacated the title. 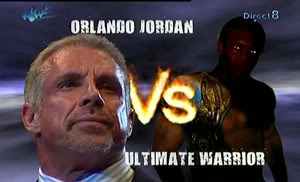 For the first time on Youtube, the 2008 return match of
the Ultimate Warrior, full version !

During the last four years I read so
many stupid things about that match, those supidities were based on the shitty
13 minutes version made by the NWE, that montage didn’t help the Warrior to be
recognised by his peers or his fans for making a comeback nearly 10 years after
retiring from pro wrestling.

First, Warrior had a serious knee problem
during that match, I think he hurt himself during his training, he choosed to
wrestle anyway. Most people expected a squash, the match last around 18 minutes
and was coherent, very different from what you watched in the shitty NWE
montages ( the match was even shorter on the DVD version available in Europe ),
at nearly 50, Warrior was able to have a good long match with Orlando, if the
exact same match took place in WWE with a good built I’m sure the fan would have
chant “you still got it” like they did with some other former Superstar like
Ricky Steamboat and eventually apreciate the effort of Warrior.

NWE had
problem with their cameras you see that even more in the full version. They
missed some moves here and there, it’s pretty annoying.

Everyone should
give Warrior (and Jordan) credits for this match, he was able perform moves he
never experienced during his carrer in the WWF, a front slam, a top rope suplex
and even a top rope diving cross body ! The match was longer than expected and
wasn’t that boring in my opinion, the lack of commentary doens’t help anyway but
Warrior and Jordan did their job clean, the booking was correct, at least for
that kind of comeback match.

Most of the people in the arena left before
the end of the match and didn’t hear what he has to say after the match, what a
lack of respect, shame on those people.

Thank you for that last match
Warrior, I hoped for a return since 1998, you finally made it in 2008, after
watching the match I can say I was proud of you, proud to be your fan.