Skip to content
Posted inUncategorized
Posted by By PYGOD July 29, 2013No Comments Forget boxing.  It’s nothing but fancy rules, round sets, weigth categories and other laughable crap!

As you may doubt, I’m a combat sports aficionado since my childhood.  And I’m also a drawing artist (far less today) since my early childhood.  One of my life passion was/is to create my own combat sports with my own combatants.  Since the reality is far from being perfect I’ve created my own reality.  My sport reality is the BKB SLAUGHTERSPORT.  BKB being a Bare Knuckle Brawl cage boxing federation.  And SLAUGHTERSPORT being a full fighting combat sport with no rules, no weight classes, and no shit!!

SLAUGHTERSPORT is the purity of combat sport.  No fuckin’ rules, no holds-barred, no weight classes, no cage, no ring, no referee, no time-limits…  Just a hard surface and two men (or women) willing to fight till one of them is KO’d, submit or die.  The referee is just there to declare the end of the fight.

* The best 4 combatants in the world (quality over quantity)
* No rules, no-holds-barred, no time-limit, no rounds, no weight classes, no drug tests, no dress code, no ring, no cage, no soft floor, no referee.  Only full fighting combat sport contested on a hard floor.  Victory by KO, Submission or Death.  (the purest form of combat sport)
* A year-long round-robin tournament. The four combatants each fighting the other three in separate matches in three separate events on a nine months period. For a total of six matches, two matches per event. (complete fairness)
* Only ONE champion

The combatants:  I’ve limited myself to four combatants.  More than this would be a dilution in quality over quantity.

I needed a woman combatant, it was primordial.  A woman’s woman enough to held her own against men and kick their asses.

And last but not least, I needed a monster heel as the main antagonist of the babyface superstar.  BUT any healthy fighting federation need a jobber, need bottom of the barrel competitors.  Not an hapless jobber who can’t kick his way out of a paperbag but a solid one, a fearsome man who can score an upset at any moment.  The jobber project was once again cancelled.  The Big Thing, a gigantic muscle monster, was once again my final choice.

Above are my 4 combatants for my dream full fighting federation, Universal SLAUGHTERSPORT Tour.

And as a sport, the SLAUGHTERSPORT isn’t a federation anymore.  It’s now a tour, which mean the SLAUGHTERSPORT ranking and champion/king or queen is decided by a fair and square year-long tournament.  In this tournament each of the four combatants will face each other (except for cause of injuries or dead).  In other words; A round-robin tournament (or all-play-all tournament) is a competition “in which each contestant meets all other contestants in turn”. 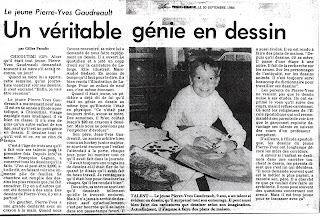 Some news paper articles of my early age drawing skills and the imaginary combat sports world that I’ve created. 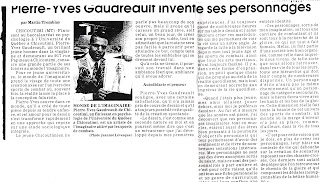 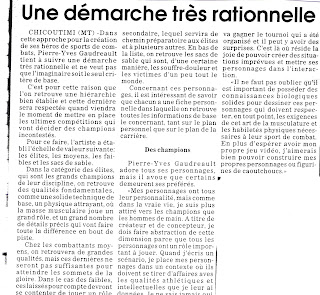 Now, writting is my main form of artistic expression.

What a fuckin’ GREAT video game it would be!!

And proud to be a One Man Enterprise.

From the original article:
http://www.strengthfighter.com/2013/03/the-perfect-fighting-sport-federation.html

BKB SLAUGHTERSPORT™ is 100% created, operated, and owned by PYGOD Inc.
No graphics, text, icons, names, logos, or photos from this site may be used without permission.
Copyright 2008 – 2011. PYGOD Inc. All rights reserved.