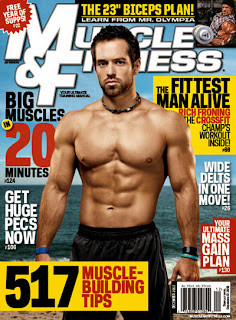 Early life: Rich Froning was born in Mount Clemens, Michigan. Soon after he
moved to Cookeville, Tennessee, where he currently
resides. There he attended Cookeville High School where he played baseball and
was an all-district, all-region second baseman. He also participated in
football. Upon graduating in 2005, Froning received a baseball scholarship to Walter
State Community College. Soon after, Froning decided to end his baseball
career, and began working at the Cookeville Fire Department, while continuing
his studies at Tennessee Technological
University. While working
out with the fire department, Froning became interested in CrossFit, which he soon developed a passion for and in
2009, he began coaching and competing.

Professional career: In 2010 Froning landed a spot in the 2010 CrossFit Games Central East
Regional. Froning won this competition to move on to the national 2010 CrossFit
Games, where he placed second. Froning won the 2011 CrossFit Games, taking the
title of “Fittest man on Earth,” winning the
competition again in 2012 and 2013. Rich has recently opened up his own CrossFit gym in Cookeville,
Tennessee.

He describes himself as: Servant of Christ. Husband. Son. Brother. Coach. CrossFitter. Galatians
6:14

Training: Rich Froning constantly
varies his workouts with no particular rhyme or reason and follows basic
CrossFit protocol (constantly varied workouts with intensity).  He trains
several times during the day, and works out with a variety of exercises ranging
from interval training, efficiency and movement drills, and other Crossfit
related workouts.  One of Froning’s favorite workouts is the muscle-up, which is
performed on gymnastics rings. In a typical training week, he does Olympic and
Power Lift 5 days a week and Metcons 6 days a week.

Diet: Rich Froning does not adhere to the Paleo diet which is popular in the CrossFit
community. His diet is not as strict as
you might think.  He doesn’t really eat that much, and only eats when his body
tells him he’s hungry and needs to refuel.  Froning eats the majority of his
daily food in the evenings. A typical nighttime meal for Froning would be steak
and chicken with a sweet potato or frozen vegetables. He doesn’t follow a
specific plan.  During the day, Froning eats simple meals that provide him with
the energy he needs to compete. The athlete is a fan of peanut butter, whole
milk, and protein shakes.

Some of Froning’s methods are discussed in his 2013 memoir, First: What It Takes to Win.

Rich Froning tattoo on his
side: “Galatians 6:14″
Galatians 6:14 (NIV) May I never boast except
in the cross of our Lord Jesus Christ, through which the world has been
crucified to me, and I to the world. 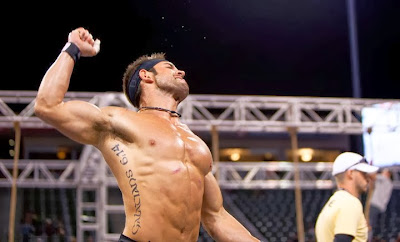