Skip to content
Posted inUncategorized
Posted by By PYGOD March 1, 2016No Comments

After Man vs Bear, and Japanese wrestler vs Grizzly Bear.

What is Man vs. Machine®?


Man vs. Machine matches specially trained human opponents against real robot fighting machines called Robot Gladiators® . In this competition, man competes against his own creations on the most basic level; physical combat.


This highly structured competition is the fulfillment of a concept that began nearly 200 years ago with the story of Frankenstein. Today, all of us have grown up knowing fantasy robots like R2D2, Robby, the Lost in Space robot and The Terminator. But this is not a fantasy.


Man vs. Machine® pits human innovation against human strength in a combat arena.


Recent advances in the fields of robotics, sensor technology and computer intelligence make this type of competition possible for the first time. In Man vs. Machine , trained human fighters use all of their fighting skills against cleverly designed robot fighting machines. The human fighters rely on physical strength, training, speed and intelligence. The human’s task is simply to disable the machine.


There are NO restrictions for the human.  There is NO limit to the force and violence the human uses to defeat the machine.  There is NO need for mercy.  And the emotionless robot opponent will show none in kind.


I give you the fight…
Wrestler Robot – Man vs Machine

A video that shows a man fighting a real robot at stage.
The video is from www.manvsmachine.com.


It is actually old stuff from the early and mid 2000. But I would like to see more about this original future Combat Sport project. So you need to go take a look at this very original Combat Sport project on: www.manvsmachine.com   A very interesting and well-made website explaining their amazing concept.

Here are some information about Man vs Machine Robot Gladiators in their detailed FAQ section.


How does the human Robot Fighter™ win?

How does the Robot Gladiator® win?

How can a human fighter defeat a powerful robot opponent?


The competition is based on demanding design restrictions that limit the Robot Gladiator’s structural strength and destructive power. The sport will still be quite challenging for human contenders, who are free to fight each match using all the deadly destructive force they can muster.


There are five key rules:


1- On-Board Intelligence Only – The fighting robots can only compete with on-board computer intelligence. They cannot be remotely controlled or controlled by humans in any way during the actual fighting. Advances in computing power and memory have enabled our independent robots to “think” at a level like that of some small reptiles. In the coming years, robot thinking ability will expand exponentially until machines will become our equals, or perhaps our masters. For now, they are more than capable of detecting movement, plotting responses and interacting as demanding combatants.

2- Non-Lethal Weapons – To prevent fatalities, the Robot Gladiators can only fight with electrical shocks and bludgeoning power from padded striking arms. The striking force is electronically limited to that of humans. While serious injuries could result, the chance of a fatality is very low – probably even lower than in human to human matches. And remember, the human fighters are there voluntarily.

3- Regulated Vulnerability – The Robot Gladiator’s “skin” is limited to plastic and aluminum in regulated thicknesses as well as removable panels that a skilled human can penetrate. Gaining access to interior components is necessary to deactivate the robot. Destroying internal components is also a legitimate method of victory for the human. Hopefully, the robots will never win in this manner.

4- Weight, size and mechanical limitations – The robot is limited to 1,000 pounds in weight with a footprint no larger than 42″ X 52″ and a height of 108 inches. Striking mechanisms are limited to a 48″ reach, roughly twice that of a human.

5- Body armor options for the human Robot Fighter – To give the human fighter additional protection, some types of body armor are sanctioned for use. These include a Kevlar helmet, weighted gloves (i.e. brass knuckles), steel toe boots and a shock proof vest or pants (only one is permitted at present).

It seem more interesting than Battlebots. 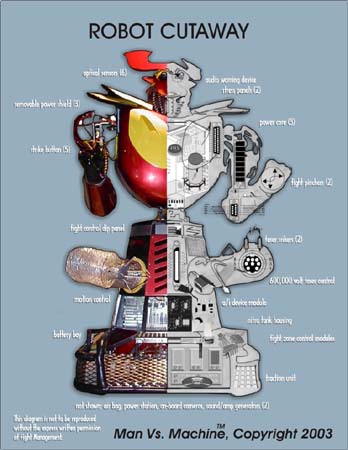 Interesting points of view on the subject.

That’s the point. This isn’t truly a “Man vs. Machine” contest, because in hand to hand combat the machine would always win. Any sane person would build their robot so that it’s armor can’t be torn off by a mere human. Battlebots and boxing are interesting because the contestants are evenly matched; their talents are directed by the rules and regulations, not held back by them. Ergo, the entire thing is stupid, because the game has to rigged in favor of mankind to make it even remotely interesting.   stormrunner

Warriors of the Year 2072 / New Gladiators