Skip to content
Posted inUncategorized
Posted by By PYGOD August 24, 2014No Comments Ric Flair always portrayed a millionaire playboy, rich heel coward, Rolex-wearing, wrestling world champion on and off-screen. Ric Flair collected a $1,000,000 a year salary (kayfabe) during his NWA World Championship tenure in the 80s. In reality, Ric Flair, Hulk Hogan, Andre the Giant, and the Road Warriors were the only ones to collect more than $500,000 a year during the 80s.

There is no deny that Ric Flair earned a lot of money in his illustrious and long wrestling career. Even way past his prime in TNA Wrestling, Ric Flair earned $22,000 a month. However
Mr. Flair always spended A LOT more than he make and never paid his taxes. Unfortunately for us all the government, the IRS in particular, never forget when you owe him.

Irresponsible financial habits and careless spending habits are often synonymous with a ton of debts and lawsuits.

Lawyers, ex-wives, the IRS, former business partners, and anyone who made the mistake of lending him money are all after Ric Flair’s old ass trying to get paid. Good luck!

Anybody who do any kind of business with Ric Flair will be screwed and will have to go to court in hope to get some of his money back!

Despite his well-documented financial problems, Richard Fliehr (Ric Flair real name) opened a company known as Ric Flair Finance in 2007 only to be closed in 2008 after filing for bankruptcy.

“Ric Flair Finance,” was an online business that referred customers to lenders, was shut down because the “business model… turned out to be completely illegal.” 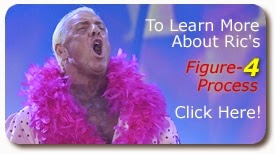 ‘Chris Porter, a business partner, had convinced Fliehr to start a company called Ric Flair Finance, which was “intended to use the fame popularity of Fliehr in order to build a lead generation company for mortgages.” Porter told Fliehr that they didn’t need a lender or broker license to start the online company, which would generate leads and pass them to lenders for a fee. Fliehr advertised the company on WWE television broadcasts and before a NASCAR race in Delaware. When RFF finally launched, the “business model … turned out to be completely illegal.” North Carolina shut down the company for noncompliance.’

Knowing Fliehr/Flair financial issues, what a stupid idea it was!