Skip to content
Posted inUncategorized
Posted by By PYGOD March 8, 2014No Comments

Shaolin Temple, Henan, China
(since his arrival at the age of 3)

RELIGION: Buddhist (He is a Shaolin monk)
DIET: Vegetarian (eating mostly vegetables) and complete sexual abstinence
DAILY ROUTINE: He trains and meditates from morning untill night. Hardens his bones by punching hard wooden dummies, runs up and down hills, focus on strengthening his tendons…

STRENGTHS
+ Master Martial Artist
+ Superhuman Speed, Balance, Reflexes and Flexibility
+ His most dangerous weapons – His vast array of devastating kicks of blinding speed, incredible explosiveness and crushing power.
+ Extensive training. Rises at 4am every day and spends 6 hours training in Kung Fu and 6 hours studying Zen Buddhism. Dedicated his life to the art. He trains every day in the Shaolin Temple since the age of 5 for the whole day (6am-9pm) for 23 years of training to fight.
+ Effectiveness. Eyes, throat, and groin attacks are his favorite techniques.
+ Resistance.  Iron Palm, Iron Vest, Iron Groin, Iron Head, Iron Neck, Iron Forearms, Iron Shins…
+ A master of channeling “Chi”, he can hang himself for several minutes, bend iron bar around his throat, break spears tucked under his chin, bend blades with his neck, lick red hot iron, sleep upside down, and break rocks with his skull. But he is too humble to show off.

WEAKNESSES
– His speed is amazing but didn’t have significant knockout power.
– Size deficit. Maybe too much to overcome against a much bigger opponent.
– Size, size, size. How can a 125-pound man hurts a 250-pound fighter? How can a 125-pound man resists the assaults of a fighter twice his size? Two questions who will be answered soon for the first time ever!

FAVORITE TECHNIQUES
Eyes, Throat, and Groin are his three favorite targets.
Punching the throat, poking the eyes, and kicking the groin.


The techniques that he uses the most are deadly jabbing and gouging attacks directed primarily at the eyes and throat.
As he says “Why waste your time?” He kicks his opponent in the groin or pokes him in the eyes first. He understands that there are three way to stop an opponent: take his
eyes, take his breath, or take his ability to stand up. These are the three
canons of martial arts. Low kicks to the knees and groin are very hard to stop.
The eye strike will stop the best fighter in his tracks.

Flurries of straight punches and repeated kicks at his groin, but mostly, relentlessly, there are those darting deadly finger tips
trying to poke out his eyes or puncture his throat.

Parries kicks with his legs while using his hands and arms to protect his
head and torso.

“If your opponent is at a distance, kick him in the groin. If he gets close,
poke him in the eyes, bring up your knee, pop him with an elbow, dig a corkscrew
punch to his stomach.” – Bruce Lee

His most dangerous weapons – his devastating kicks. His Northern Shaolin Kung Fu style armed him with kicks of blinding speeds and crushing power. Best known for his vast array of kicks. He possessed incredible speed and explosiveness.  One of his signature moves consisted of a trio of kicks, before his opponent could think of defending a strike he would be smacked with the “Trio Kicks” to the leg, torso and head to be put to sleep.


Shaolin Monks learned to protect their vital and vulnerable organs in extreme ways, including their crotch and neck. Shaolin even hang themselves with a noose as a form of training their necks.

The Iron Shirt defensive body technique was demonstrated by a Shaolin warrior monk, who was hit with a wooden staff across the back while he was pushing down on a sharp spear by the base of his throat at over 2100 pounds of force that would have killed an ordinary man, and yet was unscathed and unbruised.


Pressure Points AKA Throat, Eyes, and Balls  There is no mysticism here. A quick strike to one of these three not-so-secret pressure points will bring even the largest of opponents down.


Martial Arts Strikes   His open-palm strikes are just as effective, if not more, than his closed fists while saving his hands.


Mastered the art of the “one inch punch”.


Aims to finish his opponent inside of one minute.


He fights to the finish and attempt to kill his opponent.


He would never lost until he got killed.


Master Shi Li is in the Universal SLAUGHTERSPORT Tour to raise Money for the Shaolin Temple. 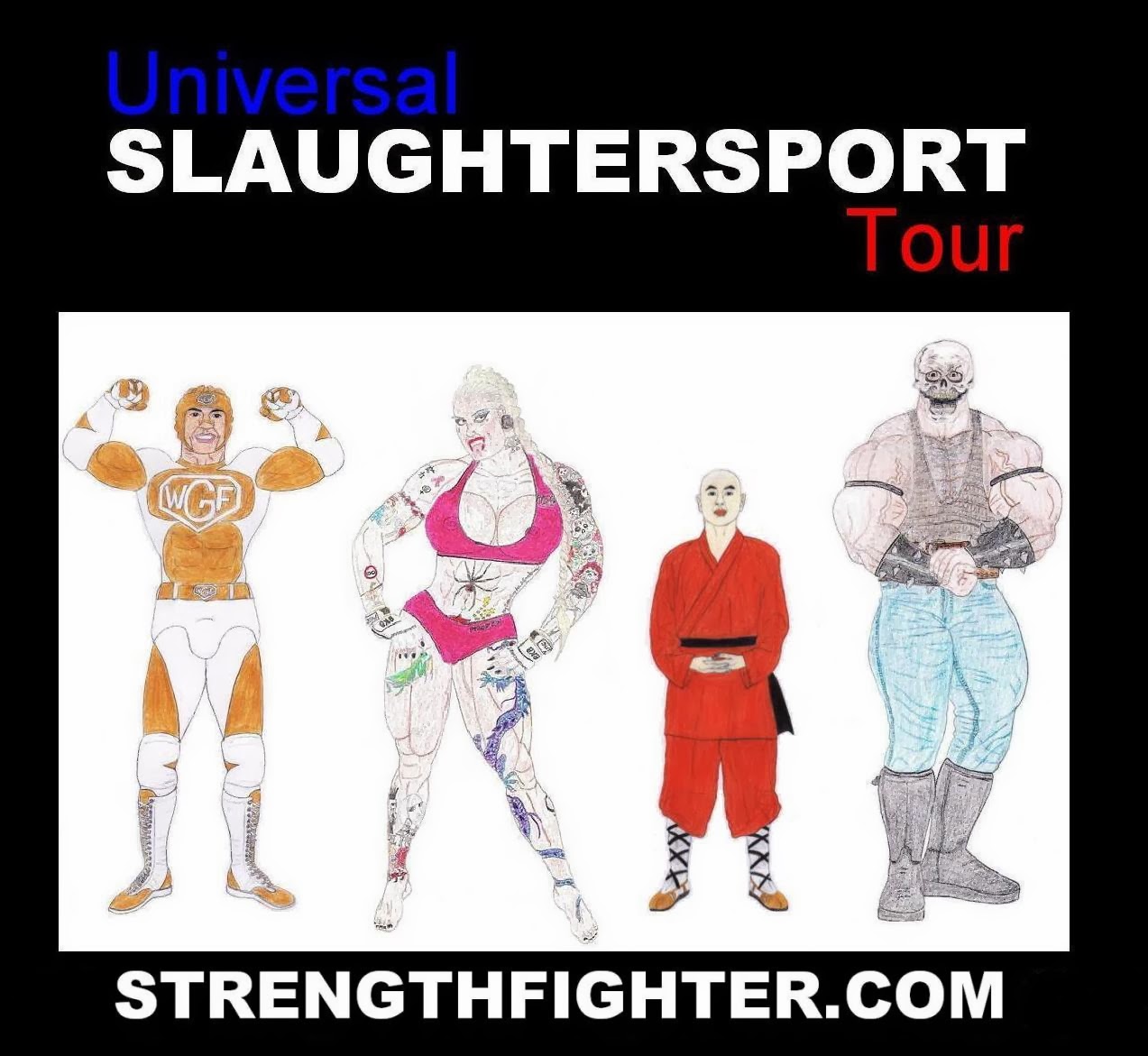 WHY SHAOLIN KUNGFU IS THE GREATEST MARTIAL ART

Master Shi Li™is the exclusive property and creation of PYGOD
SLAUGHTERSPORT™ is 100% created, operated, and owned by PYGOD
No graphics, text, icons, names, logos, scripts, scenarios or photos from this site may be used without permission.