Skip to content
Posted inUncategorized
Posted by By PYGOD November 11, 2012No Comments LYLE ALZADO – If NFL football was a combat sport and a gladiatorial game, this guy would be the epitome of the Ultimate Warrior of the field.

﻿ Lyle Martin Alzado was a professional American football defensive end of the National Football League famous for his brutal, intense and intimidating style of play.  Described as a “violent, combative player known for his short temper”.  Played 15 seasons, from 1971-1985, at defensive end for the Denver Broncos, Cleveland Browns and Los Angeles Raiders.  He was named All-Pro 3 times and All-AFC defensive lineman six times, and compiled 97 sacks in 196 games.  He stated: “I was so wild about winnin…  It’s all I cared about – winning, winning. I never talked about anything else.”  One of the most famous moment of his career and his football’s heritage was to ripped off the helmet of offensive tackle Chris Ward ‘s head and throwing it across the field.  The incident prompted the league to create a rule specifically outlawing helmet throwing.

Jewish from his mother, this angry beast was an undersized football player in high school.  He began taking performance-enhancing drugs in college in 1969 and never stopped.  At the height of his steroid and human growth hormone abuse, he spent $30,000 a year.  He injected himself so much steroids that the accumulation of scar tissues make it nearly impossible to use it anymore.  So he switched to HGH (Human Growth Hormone) and continued using it even after his professional career ended in 1985 and during attempting an unsuccessful comeback in 1990.  Despite his heavy use of steroids and HGH he denied using it throughout his career.  He later make his coming out blaming steroids for his brain lymphoma cancer, even if there is no link between the two.  These millionaire athletes always blame their steroid abuse for all their troubles in life after their careers are over.  But they never aknowledge the contribution of steroids to their success. 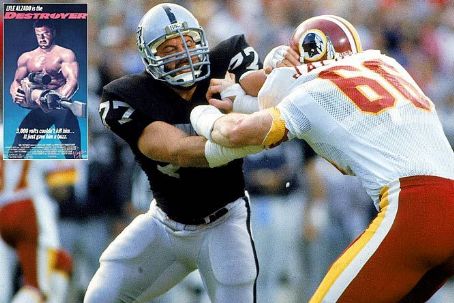 The guy was a killer in and outside of the field.  The NFL defensive lineman was rumored to slapped the face of one of the Barbarian Brothers and telling them to shut the fuck up at the Los Angeles Gold’s Gym.  Both of them finished their work out in silence.  The Barbarian Brothers were two huge young bodybuilders known for their wild behavior and crazy antics while training.