Skip to content
Posted inUncategorized
Posted by By PYGOD November 10, 2018No Comments After months of buildup in the strongman world, Fortissimus 2008 came down to the final stone – with Derek Poundstone trailing Zydrunas Savickas by one-half point, the world’s strongest cop had only to load the 517-pound Louis Cyr stone on a 36″ platform to beat Savickas and claim the coveted title of the Strongest Man on Earth.

Derek Poundstone lifts the 530 LB Louis Cyr Stone to win the 2008 Fortissimus competition in Montmagny, Quebec, Canada. The only other person to lift the (original- this is a duplicate) stone was Louis Cyr himself, 100 years earlier. 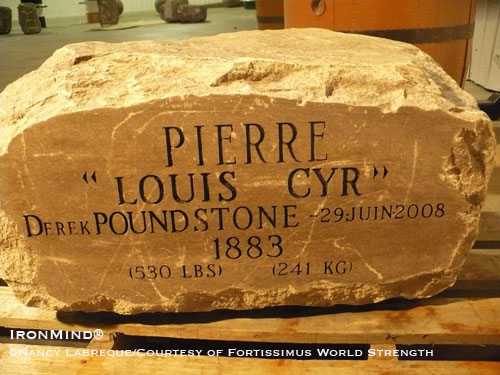 The final event was the Natural Stones of Strength. The three huge stone in the event were the

The winner would be the best time or most stones loaded. Some of the athletes lifted one stone, others the second. When it came to the third, the Cyr stone that only Louis Cyr had previously lifted over a century before, most athletes passed on it. Some touched it but did not attempt to lift it.