Skip to content
Posted inUncategorized
Posted by By PYGOD April 21, 2016No Comments

Chyna Joan Laurer was found dead on the morning of April 20, 2016 at her home in Redondo Beach, California at age 45. A possible overdose, she had been taking medication for anxiety and sleep deprivation.


The world lost a true pionner of the wrestling ring.

A real-life superhero, Chyna (Joan Marie Laurer) was 5’10”, 180 pounds of muscle. Chyna wasn’t only the equal of other male pro wrestlers. With all her in-ring accomplishments, Chyna was superior to most male WWF/WWE pro wrestlers of her era. Because she could kick their asses and defeat them one-on-one.

May your tormented soul Rest In Peace… 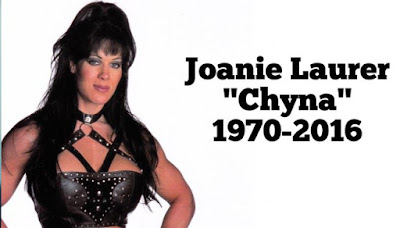 SYLVESTER STALLONE by the Numbers