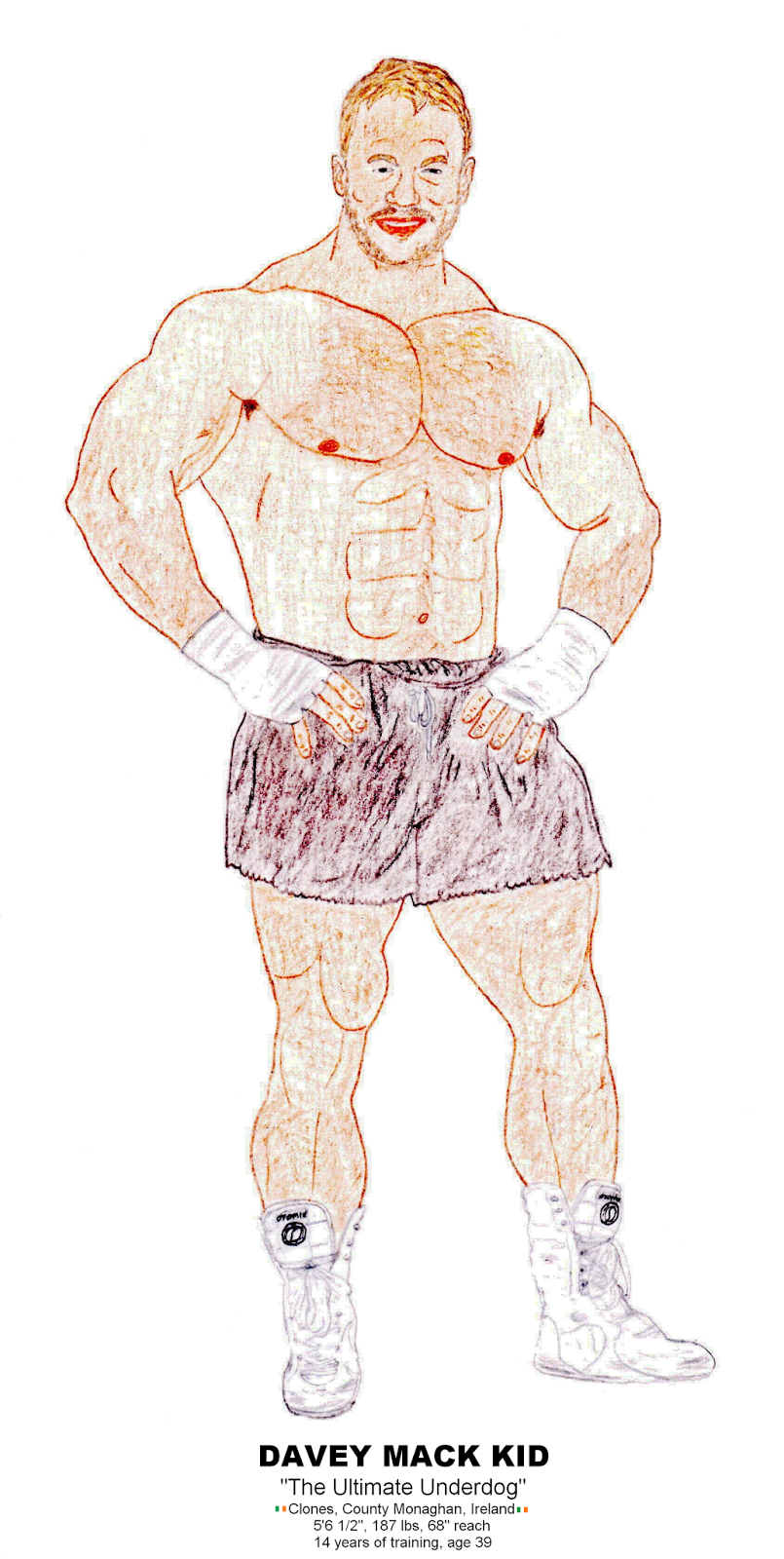 UST 4 STATS
(He was measured before UST 4)

His stats are even worse than last year. He is older, smaller, lighter and even tinier arms!!! However, he gained unvaluable experience fighting, and even defeating, against some of the best Combatants in the world and undergone elite full-time training while doing a lot of Money for the first time of his life.

AMATEUR BOXING RECORD: 24-19 (21 KO's)
- Lost his 18 first bouts by "trying to be a boxer." But despite his losing streak and being the running gag of his gym he persevered. He stopped listening to his coach and followed his brawler's instinct and was never defeated again until his last match at the Olympic games.
- Has never been knocked out. However he has been knocked down twice, but he got up each time to win.
+ Competed for his native country in Boxing (middleweight division 154-160lbs) at the Summer Olympics at the age of 30. Losing on points in the second round after receiving a bye in the first.

After realizing his dream to compete at the Olympic games. He moved to the United Stated with his family to become a professional fighter. But thing didn't goes as he expected. Just like in Ireland, he couldn't make a living as a pro fighter and had to take on two full-time jobs to support himself and his family. But he never quit on his dream to become a pro fighter and kept on training.

Was nicknamed 'Kid' as a joke for his late start in the sport.

Struggles including his training schedule (weight training, cardio, grappling and stand-up fighting) with his two full-time jobs, family life, friendship, and getting the proper amounts of rest and nutrition.

STRENGTHS: Seemingly indestructible... Boundless stamina... Punching power... Crowd pleaser... Determination... Unmatched work ethic... Unbelievably fit for his age... Fast... Unpredictible... Superhuman comeback... Physically and mentally toughness... Can absorb insane amounts of punishment.
Davey Mack Kid is an iron man! A man of toughness, a man who is nearly impossible to stop, a man of endurance, a man of heart, a man of unbreakable will. A man of iron.

TYPICAL WAR: Goes for an all-in offense at the opening... Gets pummeled by his opponent for most of the war. Foetal position defense... Then make a Superman comeback and wins the war.


No talent and natural abilities. But tons of heart, dedication and determination. Hard worker.

Aims for the knockout with every punch. Missed a lot but throws a lot more.
Can take a tremendous amount of punishment before bouncing back and making a Superman comeback.

Susceptibility to cuts, swelling and bleeding.

He never gives up.

MARITAL STATUS: A family man. Has been married for 15 years.  Has three children, two daughters and a son. Has a dog and a cat. Travels with his family as much as possible.

PERSONALITY: Hard-worker, never give up attitude, heart, funny, joking, family man.
Friendly, smiling, goofy, sympathetic, humble, enthusiast, optimist, proud to be a part of the UST 3. Trying to get autographs "for his kids" from all the other UST Combatants.
Nervous, bites his nails, his legs shake before his war. Sometime throw up.
Modest, very respectful of his opponents, honored to lives his dream competing in the UST 3.

Born and raised in poverty in a blue-collar Irish-Catholic family in Ireland. He is the last of a family of seven kids.

UNDERDOG STORY: Was an underdog all his life... Was bullied in schoolyard... Was always told that he was too small, too old to be a fighter.... When he started amateur boxing, he sucked so bad. But he eventually became good enough to represent his native country at the Summer Olympics games. Realizing his dream.

No reach, no finesse, crab-like defense, always take a beating, knock out his foes with the accumulation of several punches instead of a one-punch power.

Didn't start to box until age 25. Before that, he was a good ole out of shape, smoking, beer drinking Irish pub patron.

CHARITY: Since he can train full-time, he and his wife do a massive amount of charity work for Make-A-Wish kids.


WHAT WE CAN LEARN FROM DAVEY MACK KID?

Qualified himself to be a part of UST 3 via the SLAUGHTERSPORT Open Challenge.
Davey Mack Kid is $15,000 cash richer for his 2 wins and his 10-minutes survival.

Davey Mack Kid's exploits were the news all around the world as an example of courage, resilience and determination. He was invited the following week on SLAUGHTERSPORT Open Challenge for an interview. While wearing a solid boot and being on crutches, he stated that his goal and dream is to compete in this year UST 3. And that no injurie will be severe enough to stop him from competing in the UST if he is given the occasion.

He became a national hero and an inspiration for any of us. The Ultimate Underdog / Giant Killer / Cinderella Man gimmick works magic. Davey Mack Kid is apparently into the annual UST 3. One big problem, his left ankle is shattered into pieces thanks to Konga Ruopa's heel hook.

The UST had his best orthopedist surgeon to reconstruct Davey Mack Kid's left ankle by surgery. He is expected to go throught 3 to 6 months of rehab after the surgery before being ready to fight again. In the very best case scenario, it could be 4-6 weeks.

The UST arranged and paid for the surgery and the physical therapy but haven't take a decision concerning Davey Mack Kid participation in UST 3.

Thanks his will and dedication to the intensive physical therapy, the underdog blue-collar hero Davey Mack Kid

Under the tutelage of his assigned trainer/coach Clarence Goodridge who was only instructed by PYGOD to transform DMK into "a credible opponent".

Under the tutelage of who believe he can train him to become the best fighter in the world.
Added at UST 4.


Davey Mack Kid is the exclusive property and creation of PYGOD
SLAUGHTERSPORT™ is 100% created, operated, and owned by PYGOD.COM
No graphics, text, icons, names, logos, or photos from this site may be used without permission.
Copyright 2015. PYGOD Inc. All rights reserved.
Publié par PYGOD à 09:13