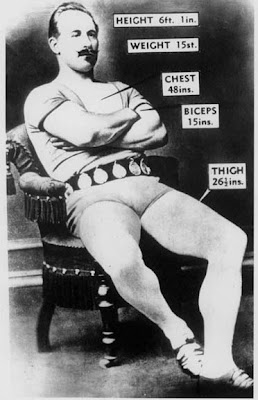 Donald Dinnie has been recognized as "The Nineteenth Century's Greatest Athlete" and "the first sporting superstar".  Competed professionally from the age of 16 to the age of 63.  And believe me 63 years old in the early 1900s was like an hundred years old today.  During his half a century long athletic career, Dinnie was involved in over 11,000 successful competitions. 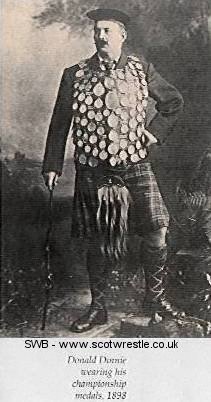 Donald Dinnie was an unparalleled all-around strength athlete competing in every type of strength event.  As a professional sportsman, he won over 10 000 awards, competitions, and contests including a 21-year reign as the Scottish Highland Games champion (1856–1876), 2 000 hammer throwing contests, over 2,000 wrestling matches, 200 weightlifting prizes, and about 500 running and hurdle races, plus heavy and light athletics, sprint, long and high jump, pole vault, putting the stone (the Dinnie Stones), caber-tossing, 28 lbs and 56 lbs weight-throwing for height as well as distance...  Donald Dinnie was really a jack of all trades!

Some of his most famous feats include (Willoughby 542):


According to the inscriptions on a Championship Belt given to Dinnie for being the single greatest athlete ever to walk the Earth by "the Colonies", which I assume was a colonial authority ruling Scotland, Dinnie was:


What if...
Being a world champion wrestler, weightlifter, and in heavy and light athletics.  Comparing his best performances - notwithstanding the fact that he was ineligible as a professional and that Dinnie's era was long before the 1896 Athens Olympics - it is estimated that he would have won ten medals (seven gold, two silver, and a bronze). 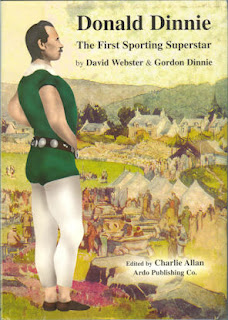 As mentioned by David Webster in his book: "Dinnie was the first globetrotting professional athlete to make real money out of sport."  Indeed, Donald Dinnie satisfied all the conditions of a twentieth century superstar: widespread fame, success, and riches.  Dinnie was a 21-time Scottish Highland Games Champion (1856-1876), held the title "World Champion Wrestler", and obtained the unofficial titles of "Greatest Athlete in the World", and "Strongest Man in the World".  He was so dominant that: "The most popular athletes of the day were present, topped by the redoubtable Donald Dinnie, with whom all competitors at feats of strength appeared as pygmies." (Reference 1)

The Reality
"Athough Dinnie was a fine wrestler and a wonderfully strong man, he was never at the very top of these fields.  He never reached his potential in either wrestling or lifting because of his preference for the profits to be had as a great all-rounder." (reference 2)


Fame and fortune
He appeared in Europe, America, Australia, South Africa and New Zealand and challenged all comers.  He also made a very good living at all this, earning at least £25,000 in his career, a sum that would be worth about US $2.5 million today. In the 1870-80s he travelled the world earning more in a day than farm labourers could earn in a lifetime.  Earning £320 on the day he tackled Muldoon in a wrestling match.  Being a world-famous tough son-of-a-gun, heavy artillery war bomb shells in the First World War were nicknamed 'Donald Dinnies' after him.  And to this day his image continues to endorse commercial products in Scotland.


Modern-day equivalent of Donald Dinnie
The only modern-day athlete that came close to emulate Donald Dinnie would be Mariusz Pudzianowski.  Pudzianowski was probably the greatest World's Strongest Man competitor ever (5-time World's Strongest Man champion in 7 years of competition between 2002 and 2008) then became a c-level MMA fighters (MMA record: 3-2 and 1 no-contest) after his retirement from strongman competition.
﻿﻿﻿
Unlike Dinnie who was an elite fighter and strength athlete, Pudzianowski was the VERY BEST strongman competitor but a mediocre MMA fighter.  So in a near future, I can't see any athlete being the equivalent of Donald Dinnie.  Being a world-class strength athlete AND a world-class professional fighter seems to be an impossible feat in the modern-era.  If Pudzianowski can't be both... Who can?