Skip to content
Posted inUncategorized
Posted by By PYGOD December 17, 2013No Comments Watch the rediffusion on http://www.whsports.net/

The entire locker room is there, the Autority is in the ring, to pay respect and honnor the Champion of Champion, new WWE World Heavyweight Champion and the face of WWE “The Viper” Randy Orton. His entry was arrogant and totally awesome. His speech was full of rightful bragging…

Brown nose John Cena demanded that Orton wrestles against Daniel Bryan tonight??  What an ass licker!  Randy Orton didn’t want to fight Bryan.  But the Autority listened to the desire of the WWE Uniserve and make the match official for tonight’s Main Event.  WWE World Heavyweight Champion Randy Orton vs. “The Superstar Of The Year” Daniel Bryan.

WWE Tag Team Champions Goldust & Cody Rhodes vs. Big Show & Rey Mysterio
Big Show & Mysterio won but the titles weren’t on the line.  Brown nose Big Show helped Goldust to get up?!?  Can you believe it?  Big Show was once a fearsome monster heel!


Backstage segment, Randy Orton is furious against the Autority for making him face Daniel Bryan tonight.  The Autority doesn’t seem to care.


IC Champ Big E Langston & Mark Henry vs. The Real Americans
It was predictable, Langston & Henry won.  Another case of tag team specialists getting beaten by random superstars teaming together.  It’s been that way for years.  No surprise that the legitimacy of tag team action won’t get back anytime soon.

CM Punk message for the Autority.  CM Junk called out COO Triple H… Instead “HBK” Shawn Michaels came out… Looking fresh out of an hunting trip, HBK introduced CM Punk opponents for tonight, The Shield.  LOL 🙂  But unfortunately, it won’t be a 3-on-1 handicap match 🙁  It will be a 6-Man tag match.  WWE Universe voted The Usos as partners of CM Junk…

The Shield vs. The Usos & CM Punk
The Shield won when future main event player Roman Reigns pinned CM Punk after a spear.

Randy Orton tells the world and the entire WWE Universe “kiss my ass!” 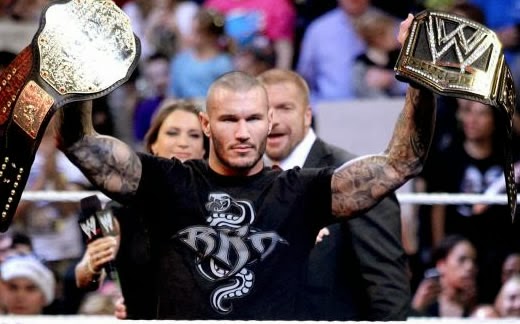 WWE World Heavyweight Champion Randy Orton vs. Daniel Bryan
After a long “THIS IS AWESOME!” match. Randy Orton did a low blow to “undeserving troll” Daniel Bryan and got disqualified.  Then brown-nose John Cena stormed the ring to help Bryan but was RKO’d by Orton.

OVW Four greats before they were greats