Skip to content
Posted inUncategorized
Posted by By PYGOD October 11, 2012No Comments 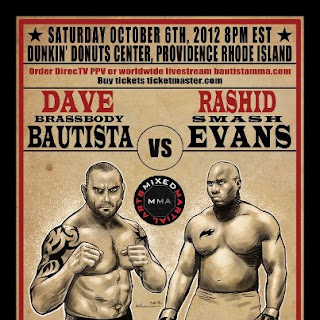 Rashid “Smash” Evans (to not confuse with UFC fighter Rashad Evans) was scheduled to be Batista’s first opponent.  But he broke his probation and landed back to jail.
Rashid “Smash” Evans, New York, 6’2″, 225 lbs, 33 years old  Amateur MMA record: 1-2
﻿

Batista was expected to make his MMA debut against Rashid Evans on October 6, 2012 at Classic Entertainment and Sports: Real Pain in Providence, Rhode Island. However on October 1, 2012 it was announced that Evans was forced out of the bout after a probation violation landed him back in jail. With Batista’s MMA debut still on for the event, Evans was replaced by 6’2″, 300+pound, 46 fight veteran journeyman Vince Lucero.

Weighting-in a lean and mean 265 pounds, 6-time WWE World Champion, 43 years old Batista aka Bautista (now nicknamed “Brass Body”)   would go on to win the fight by TKO at 4:05 in the first round. 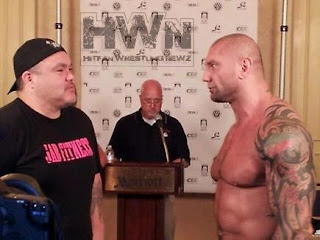 Hulk Hogan vs Andre The Giant Tale Of The Tape