Top 10 Most Hardcore Wrestler Of All Time

There is several top 10 Hardcore Wrestlers on the web. But I think the following top ten is the most accurate and representative. The article was so accurate that I did a copy and paste of the entire article published on wwe.com to share it with you on this blog.

Unlike all the other stuff on this blog. This article wasn't written by me.
This is the integral article originally published on wwe.com.
http://www.wwe.com/classics/10-most-hardcore-wrestlers

While hardcore wrestling came into prominence in the 1990s with the advent of ECW, its roots go back much further than that. Searching for a way to settle the most heated rivalries, promoters put wrestlers into increasingly dangerous situations, whether it be Steel Cage massacres or No Holds Barred slugfests.
See the brawlers in photos | Watch them in action
As time went on and new generations of competitors entered battle, the stakes were raised. Tables, ladders, chairs, barbed wire and anything else that could be used to bludgeon an opponent was brought into the ring. In the most twisted hands, the sport of wrestling could be mutilated into something more sadistic than the ancient Greeks could have ever imagined.
The 10 brawlers in this countdown mastered the ways of the weapon, learning how to bash the opposition with precision. But who is the king of the beautiful disaster that is hardcore wrestling? Strap in and find out. 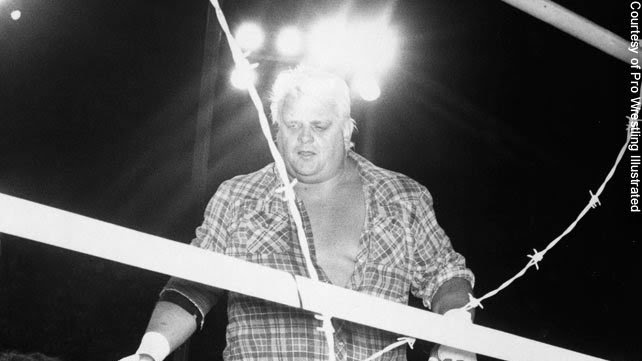 Dusty Rhodes is one of the greatest talkers in sports-entertainment history. But behind all the soulful interviews was a vicious brawler. Starting out in the business, Rhodes teamed with Dick Murdoch, bringing brawls out of rowdy Texas barrooms and into the ring.
Rhodes brought his brand of hardcore wrestling to the national stage during his time in the NWA. He devised the harrowing WarGames bout to brutally punish The Four Horsemen. He took on Tully Blanchard in barbed wire bouts, forcing the refined grappler to feel cold steel ripping into his flesh.
Watch Dusty battle in WarGames
After a crimson-covered brawl with Superstar Billy Graham in 1978, the Texas Bullrope Match became The American Dream’s calling card. He was drawn out of retirement on several occasions by young upstarts such as Randy Orton and Steve Corino, who thought they could beat Rhodes at his own game. More often than not, though, they got their bell rung by Dusty’s trusty weapon. 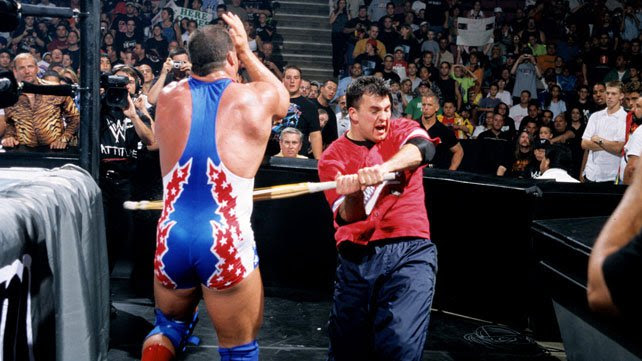 Shane McMahon’s inclusion on this list might surprise a sizeable portion of the WWE Universe. Even though he may not have enjoyed as lengthy an in-ring career as some of the other hardcore warriors on our countdown, his fearlessness and tenacity make him worthy.
From his earliest bouts, The Boy Wonder showed he wasn’t going to coast by on his family name. He survived an insane beating at the hands of Kurt Angle, where he was thrown through multiple plate glass windows. He even won a vicious Street Fight at WrestleMania against his own father, Mr. McMahon.
Shane McMahon photos
But most of all, Shane McMahon will be remembered for his daredevil leaps from the top of WWE’s towering pay-per-view sets. Whether he landed on his opponents or connected with the cold concrete floor after his terrifying dives, Shane McMahon proved to the WWE Universe that he was willing to make any sacrifice to settle a score. 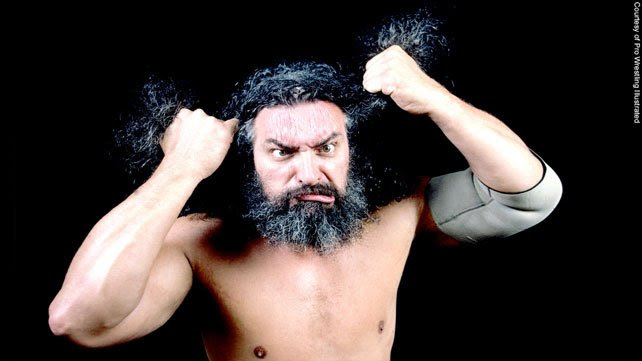 A madman who took pleasure in dishing out punishment, Bruiser Brody quickly became one of wrestling’s most feared competitors. Never content to stay in one promotion, Brody traveled from territory to territory, pummeling opponents from Florida to Japan and everywhere in between.
Legends quickly spread of the hirsute maniac who swung chains around wildly. Japanese fans ran away in terror as Brody chased them down. Any poor sap unlucky enough to step in the ring with Brody often left with a few new scars and an extremely painful tale to tell.
Eventually, Brody found his equal in Abdullah the Butcher. The two mountainous men brutalized each other around the world. Bruiser brought his chains to counter Abdullah’s trusty fork as the two titans collided in World Class Championship Wrestling, as well as Japan and Puerto Rico, where their brutal brawls inspired the hardcore wrestling of the future.
Watch Bruiser Brody vs. Abdullah the Butcher in a Steel Cage Match 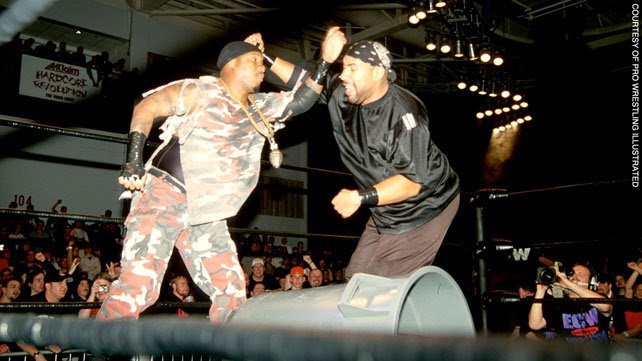 Most Superstars grab whatever they can find at ringside during a hardcore battle. Not New Jack. ECW’s “Original Gangsta” came prepared with a trash can or shopping cart overflowing with whatever plunder he could find beforehand.
There was no limit to what New Jack could pull out of his hardcore hat. Opponents were brutalized with pizza cutters, video game consoles, street signs and countless other unique weapons as Dr. Dre’s “Natural Born Killaz” echoed through the arena.
Watch New Jack pummel the opposition
Having spent time chasing down fugitives as a bounty hunter, New Jack had no problems getting extremely physical. He took pleasure in fighting through rabid ECW crowds with foes like Da Baldies and The Dudley Boys. He even put his own body on the line when necessary, diving from scaffolds and balconies onto helpless foes. Often, the most dangerous weapon was New Jack himself. It’s extremely hard to use the word “wrestler” to describe Abdullah the Butcher. He never really showed that he could execute even the most basic hold. Instead, Abdullah chose to pummel opponents with clubbing blows and grisly stabs with whatever sharp objects he could lay his hands on.
The Butcher always managed to hide a fork in his baggy pants, taking it out at the right moment and digging into his opponent’s skull. The Butcher never stayed put for long, traveling the world in search of his next sadistic attack, landing for brief spells in AWA, WCCW and WCW, as well as Japan and Puerto Rico.
Watch Abdullah's vicious WCW debut
There’s no doubt Abdullah loved to brawl, a fact made obvious by the deep scars in his head. The cranial wounds ran so deep that The Butcher could stick quarters in them, a party trick he loved to pull out whenever possible. 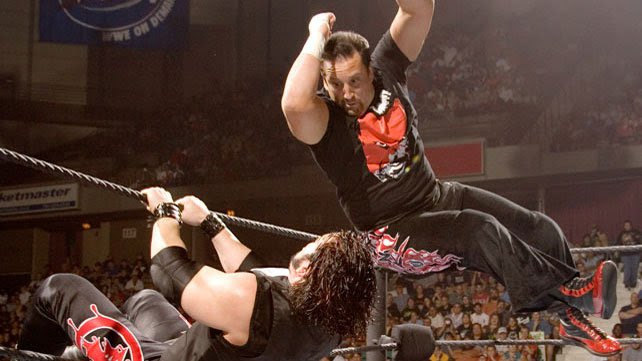 Tommy Dreamer almost missed out on becoming the heart and soul of ECW. The rabid Philadelphia crowds loathed him upon his 1992 arrival. They chided him for his colorful suspenders and decidedly un-ECW personality.
The best of Tommy Dreamer
That same bingo hall crowd quickly came around when Dreamer willingly took 10 shots from The Sandman’s Singapore Cane while shouting, “Thank you, sir, may I have another?” after each lash. The normally vocal ECW faithful were shocked into silence by Dreamer’s actions and gained a newfound respect for him that endures to this very day. The incident was the start of Dreamer’s metamorphosis into The Innovator of Violence.
Dreamer often used the Singapore Cane, along with many other weapons, in brutal brawls with Raven, The Dudleys and countless others. His embrace of the hardcore style, along with his devotion to ECW until its bitter end in 2001, made him the ultimate ECW crowd favorite. 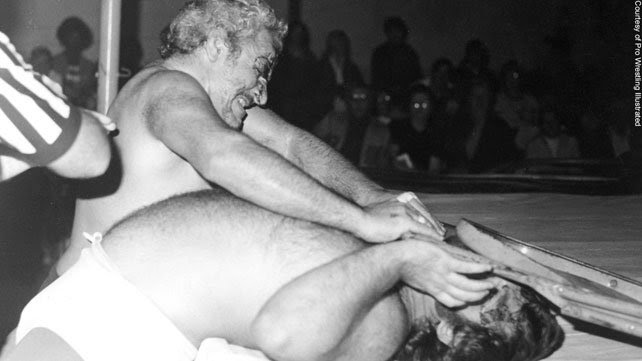 One of the earliest adopters of the hardcore style, The Sheik knew how to use weaponry to batter his opponents and strike fear into the hearts of those who were watching.
Anything and everything was fair game when opponents like Bobo Brazil stepped into the ring with him. The Sheik loved to keep a pencil tucked in his boot, taking out the extra-sharp writing implement when the referee turned his back and carving his foes’ foreheads up.
Watch The Sheik's WWE Hall of Fame induction video
He even learned to control fire, conjuring fireballs seemingly out of nowhere. His opponents felt the heat when The Sheik tossed them in their faces. Even after he retired from competition, his influence was felt. The WWE Hall of Famer’s nephew, Sabu, studied under his uncle, putting his own twist on hardcore while wreaking havoc on ECW, WCW and WWE. 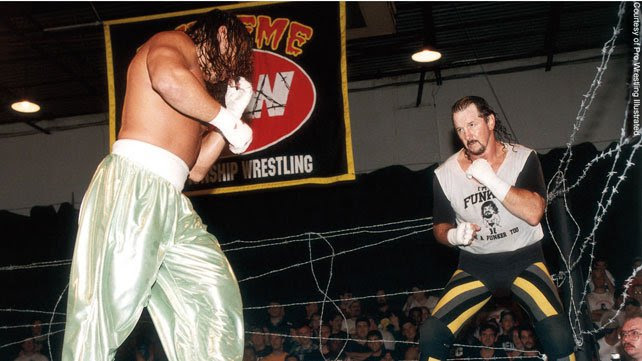 Terry Funk’s embrace of hardcore wrestling quite possibly might be the most extreme mid-life crisis in history. Born into a wrestling family, Terry was taught the finer points of technical wrestling by his father, Dory Sr., and older brother, Dory Jr. Though he had a reputation as a hothead who could brawl, Funk’s skill on the mat earned him an NWA World Title in 1975.
During Funk’s resurgence in the 1980s, though, he seemed to snap completely. Terry reintroduced himself to WCW’s fans by piledriving Ric Flair through a table before taking on The Nature Boy in a brutal “I Quit” Match.
Watch Terry Funk get hardcore in ECW | FULL MATCH: Flair vs. Funk
Terry Funk went even further during the early 1990s. Taking on Mick Foley in a now-infamous hardcore massacre in Japan, he showed that nothing scared him, not even barbed wire or explosives. That proved useful during Funk’s foray into ECW, where the “middle-aged and crazy” brawler won the hardcore group’s World Title. 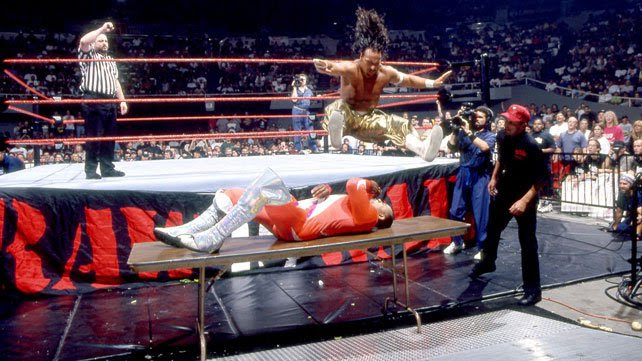 Born into a hardcore bloodline, Sabu took extreme wrestling to new levels upon his ECW arrival. Officials, fearing for the safety of fans, wrestlers (and even Sabu himself), forced the dangerous competitor into a straitjacket and restraints before and after his bouts.
The best of Sabu in ECW | Sabu's top WWE moments
Once Sabu escaped, there was no stopping him from putting his own body on the line to inflict damage on anyone in his path. He caused mayhem every time he stepped in the ring. ECW crowds cringed as barbed wire tore through Sabu’s biceps. In WCW, viewers were stunned as they watched Sabu put himself through tables, just so a little carnage was left behind. The WWE Universe watched in awe as he recklessly soared through the air with a chair in hand, crashing into helpless opponents.
Though he was a Triple Crown Champion in ECW, the silent maniac didn’t care about titles. Sabu thrived on destruction. 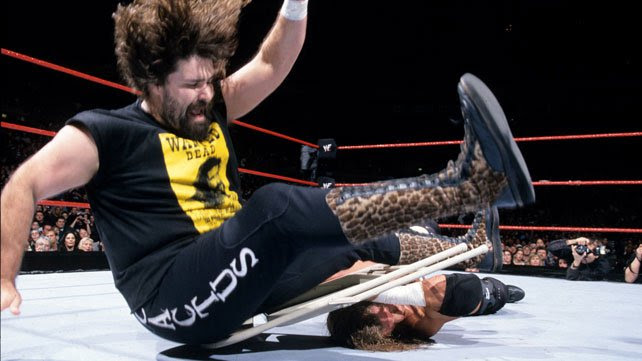 When people talk about hardcore wrestling, the conversation always ends up centered around Mick Foley. For a generation of fans, the word “hardcore” was introduced to them by Mrs. Foley’s Baby Boy during the infamous 1998 Hell in a Cell Match against Undertaker. The visceral image of light glimmering off the thumbtacks stuck in his flesh, along with the toothless grin he flashed, is burned in their brains forever.
Foley recalls his wildest brawls
But even before that fateful night in June 1998, Foley had established himself as a glutton for both taking and dishing out punishment. Whether it was in the infamous barbed-wire and explosive Japanese hardcore matches or his brutal brawls with Vader, Mick Foley made it clear his idea of wrestling was less than conventional.
His affinity for brutality paid off. Foley was named the first WWE Hardcore Champion, a platform from which he launched himself to the WWE Championship and into the WWE Hall of Fame.