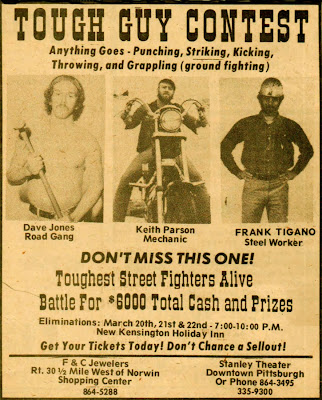 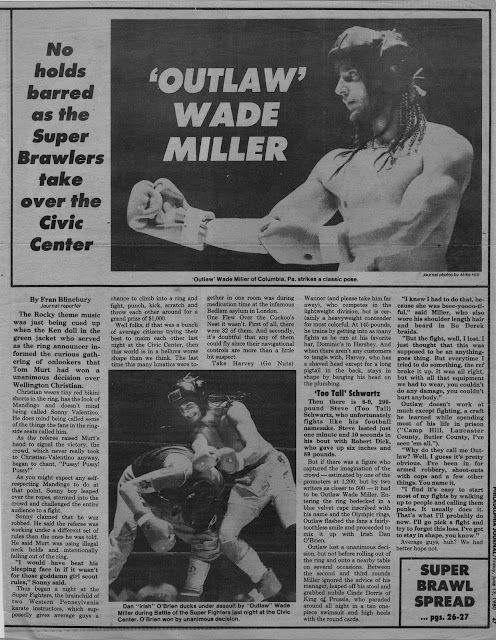 NFL Football player, Len Pettigrew of Philadelphia Eagles, wins the Heavyweight Title at the “Battle of the Superfighters” 1980.

Len Pettigrew, a former NFL defensive end with the Philadelphia Eagles, who took part in the heavyweight tournament and ripped through the competition. Although technically an amateur with no martial arts training to speak of, he was too fast, too strong, and too athletic for his opponents. It was now obvious that it would be impossible to keep the tournament strictly for amateurs. Not only had past contestants expressed interest in fighting again, but there was also a desire to see the best in other sports - boxing, wrestling, judo, kickboxing - try their hands in no holds barred competition. The only solution would be to create a professional division.  (source) 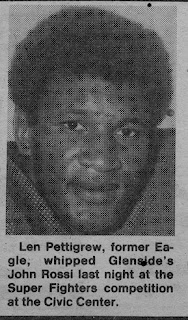 Len Pettigrew was chosen as a National Football League player after years of dedication, endurance, perseverance & excellence in the field of athletics. He went on to play professional football for 5 years, including years spent in the World Football League. Len was a 5x collegiate All American playing Football and Wrestling Len was also a Professional Boxer training at Mohammed Ali's training camp in Pennsylvania. His career covered the US, Mexico and Jamaica.
Unlike his claim, no professional boxing record can be found under his name.


Watch highlights from KDKA’s documentary of America’s first mainstream league of mixed martial arts style fighting championships. The league of events pitted combatants from all fighting disciplines including boxers, kick boxers, martial artists, wrestlers, grapplers, and all around “tough guys.” Competitors could win by opponent’s submission, knockout or decision (based on the 10 point must system). The competitions were promoted as “Anything Goes- striking, throwing, grappling, punching, kicking, ground fighting, and more.” The shows were immediately dubbed by the media as “Organized, Legalized, Street fighting.”