Skip to content
Posted inUncategorized
Posted by By PYGOD May 18, 20138 Comments

Antonio Cesaro strength…  Are you kidding me?

What’s the big deal with The Neutralizer??  It’s nothing more than a gloriflied piledriver.  And for your information, anybody can do a piledriver!!  Jerry Lawler, who was never considered a powerhouse, was the King of the piledriver.

Other unreal feats of strength

At 0:36, Cesaro picked the 290-pound fat boy from the second rope onto his shoulders!  What a big deal!!  Do you remember when The Undertaker picked the 400-pound Mark Henry into the Last Ride powerbomb at Wrestlemania?  It was only possible because big Mark was already standing on the second rope.

Comparing this crap to Hulk Hogan body slamming Andre the Giant, Brock Lesnar F5 on the Big Show, John Cena FUin’ The Big Show and Edge at the same time, and to Ryback delivering his Shell Shock on The Big Show?!? Are you fuckin’ kidding me!!! The joke is not even funny! What about classifying Santino Marella’s Cobra as a feat of strength!!

His insane workout routine…  What??
He squats 4 plates, 5 plates (each side)…  Believe me, I’m a former strongman competitor and I can tell you that squatting 400-500 pounds is nothing to brag about.  Impressive for any man and gym rat alike.  But just the doorway in the world of strength!  As seen in the video, Cesaro has only 310 lbs on his back.

Doing military press with 115 pounds?!?  No big deal!  I lift that weight for reps with one hand doing Overhead Dumbell Press!!

The only thing that “impress” me about his ‘very intense’ workout is his one-hand 115-pounds barbell snatch.  However, do not forget that the great Vassily Alexiev used to one-hand snatch over 225-lb on a barbell years ago!

The weights he actually used for his “superhuman” workout.

WTF are you talking about?

Michael Cole always brag about Cesaro’s strength as he always says, “Pound for pound, Antonio Cesaro is the strongest superstar in WWE today.”  No way!  It look like an overhyped joke to me!  Cesaro is 6 ft 5 inches tall and 232 pounds.  And Mark Henry is more than two-time stronger than Cesaro and weight below 450 pounds.  So the 400 pounder Mark Henry is the pound for pound strongest WWE superstar today.

But for a pro wrestler living in the land of giants, Cesaro is not that strong.

Enough of this internet crap saying that Ryback is a child next to Antonio Cesaro’s strength.  Saying that Antonio Cesaro could win the World’s Strongest Man competition with a little bit of training.  Make me laugh!!  Stop the bullshit and open your eyes!!!  If Cesaro is as strong as you say he is.  Me, PYGOD, I’m certainly the strongest man on earth!!  LOL:-) 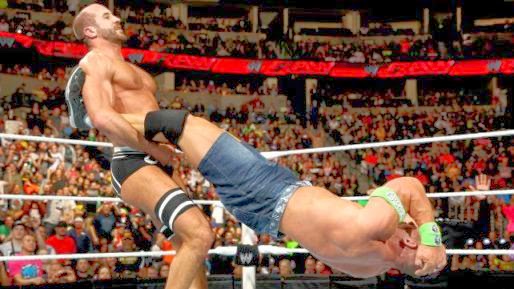 You want the REAL strongest wrestler pound-for-pound around.
Go check THIS!

This is real brute strength!  Not a useless modified piledriver!!
Johnny “The Bull” Stamboli was the man!!!

Single handedly overhead pressing 350-pound men is by very far The Most Impressive Feat Of Strength I ever witnessed in the wrestling world.  And believe me, I’m a lifelong wrestling fan, aficianados and connoisseur.

The World’s Strongest Men Of Wrestling