Kill or Be Killed / Karate Olympia 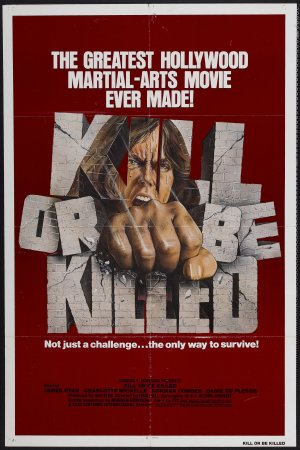 The most fraudulent claim ever made on a movie poster!!!


A famous martial artist, Steve Chase (James Ryan), travels to the desert for what he thinks is an Olympic-style competition. The competition turns out to be a trap set by Baron von Rudloff (Norman Coombes), an ex-Nazi General who is still bitter over the humiliating defeat of his martial arts team at the 1936 Summer Olympics by Japanese martial artist Miyagi (Raymond Ho-Tong).

The fighting style in the film is a showcase of the pure style of Japanese karate, courtesy of the Japan Karate Association (South Africa). Shihans Stan Schmidt and Norman Robinson choreographed the film's karate sequences as well as appear in the film as two members of von Rudloff's karate team.

The film is also known as Karate Killer and Karate Olympia. The film was so popular in the United States that Film Ventures International greelit a sequel, Kill and Kill Again, starring James Ryan as martial arts champion Steve Chase, in 1981. Like its predecessor, the film's extras were real karateka from the Japan Karate Association (South Africa) with Stan Schmidt and Norman Robinson returning as karate choreographers and co-starring as two of Steve's friends.


The sequel is below.

No I didn't watch it!

It seem to be worst than the first.