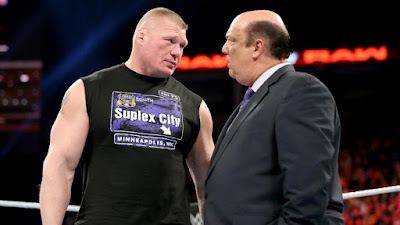 Paul Heyman was ordered to sell non-existant "Goldberg!" chants at the Target Center, Minneapolis, Minnesota even through Brock Lesnar studied at the University of Minnesota.

I was really happy to heard the "Suplex City" and "Goldberg Sucks!" chants and to see Paul Heyman desperately trying to sell his pre-scripted promo.

Apparently, Vince McMahon who was backstage, was so furious about the crowd refusal to chant "Goooooldbeeeerg!!!" that he ordered Lesnar's music to be started to end the uncomfortable Heyman's promo.

If you want to have a blast watch the Lesnar / Heyman failed promo.

Not that I dislike Goldberg, but I wish to heard a lot more "Goldberg sucks!" in the following weeks.

As the conquerer of The Undertaker WrestleMania Undefeated Streak, the unstoppable force in the WWE, and more importantly as a very legit asskicking machine UFC Champion. Brock Lesnar deserves to be a lot more popular than Goldberg who was absent for the last 12 years.