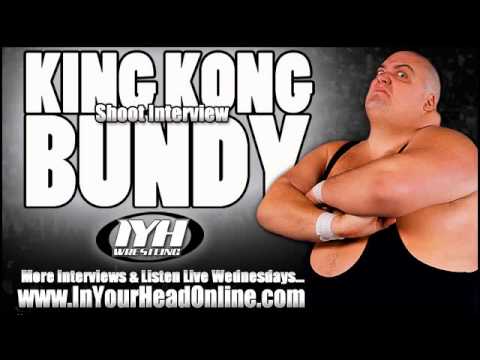 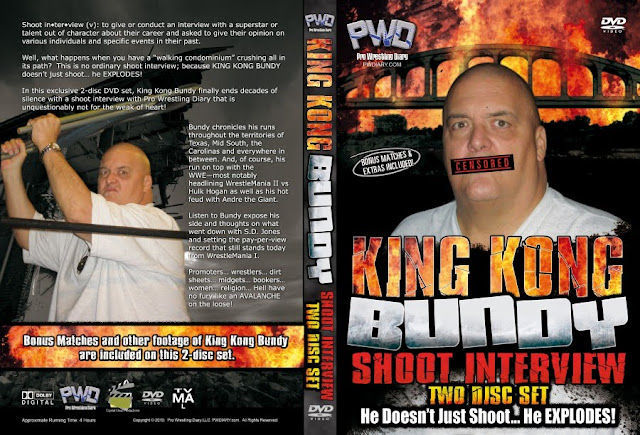 Bundy jokes(?) that he was the best big man ever.
Mabel is a nice guy.  In the ring he was the shits.
King Kong grew up watching a little bit of the WWWF.
Bundy quit college and was a bar tender for 6 days a week.
A misunderstanding got KKB in the business.  While someone was trying to get wrestling tickets for his brother, the word passed on instead that Bundy’s brother wanted to BE a wrestler.  One thing led to another and Bundy ended up in wrestling school.
Bundy played football in high school and weighed 350 pounds as a senior.
Larry Sharpe trained Bundy.  They focused on basic bumps and KKB feels they could have learned much more.
KKB knew wrestling was fake since Larry had no bruises from weeks of wrestling.
Bundy debuted in the WWWF as a jobber and made 50 bucks for 3 matches.
They also had to help set up rings and do other things for Larry as part of “paying dues”.
The payoffs made for a struggle to eat and pay rent.
Bundy was brought into Georgia to do a job for Bruiser Brody.  Manager Gary Hart spotted him there and alerted Fritz Von Erich.
KKB came into WCCW as “Big Daddy” Bundy, an “oil field worker” who was turned into a wrestler.
Bundy worked for Blackjack Mulligan’s group where Mulligan had to take outside bookings just to make enough money to keep his business running.
He had to leave WCCW just as business exploded with the Freebirds vs. Von Erichs. Booker Ken Mantel wanted his buddy “The Mongol” to take KKB’s spot. The Mongol would go onto to portray a hillbilly during the WWF’s Rock and Wrestling Era.
Fritz was a nice guy, but had a giant ego.
David was the best worker, Kerry looked great and Kevin was athletic but didn’t know how to work.
The Von Erichs gave their little brother Chris drugs when he barely pubescent and had a ring rat give him a blowjob.
Skandar Akbar was hilarious.
KKB went to Mid South next where Bill Watts’ right hand man Ernie Ladd seemed to hate Bundy.  KKB buries Ladd here in response.
His payoffs were around 2 grand a week there, which pleased Bundy.
JYD was making at least twice that amount as the area’s star.  JYD tended to lay around a lot instead of “selling”, which made for some tough matches.
Ted DiBiase was taken care of by Watts since Ted’s dad was a wrestler.  Ted would be strung out on drugs and Watts would arrange rides for him from town to town.
KKB never liked the nickname “King Kong”.
“If ever a man liked to be an asshole, it was Ole Anderson.”
Bundy went to Ole’s GCW and business was dead.
KKB was supposed to go to Mid-Atlantic but he didn’t like the way he was booked at his first TV taping and so he went to Memphis instead.
Ernie Ladd would lie to Bundy about not being able to find anybody that wanted to book him – so when Dusty Rhodes came to Mid-South Bundy asked him about it (since Dusty was Florida’s booker) and Dusty said “I’ll give you a starting date right now”.
Tommy Rich was a drug fiend. Bundy was driving 3 other wrestlers and had to drive all night since Rich and the other 2 guys were drugged out of their heads and in no condition to drive.  Bundy ended up nodding off almost and rear-ended another car.  KKB’s passengers refused to pay for any damages since Bundy was driving.
Rick McGraw would get pilled up and basically shove food in his mouth and grind it because he couldn’t chew.
Hogan met Bundy in Japan and got him his WWF gig.
Vince Jr. ignored him when Bundy was still a jobber, wouldn’t even say hello.  KKB would never end up meeting Vince Sr.
KKB never heard anything about Jesse Ventura trying to start a union before Wrestlemania 2.
Bundy didn’t feel Jimmy Hart was a good fit as his manager and was glad that Bobby Heenan replaced him.
KKB never went to Vince for anything and he feels it probably hurt his career by not pushing himself.
John Studd used to kiss Andre’s ass all the time.
Chief Jay Strongbow would constantly tell Big John Studd how shitty he was in the ring.
Gorilla Monsoon told Bundy that the WWF needed $385,000 a week coming in to break even during the period around 85-86.
Bundy hates Randy Savage. Angelo was an asshole too. Lanny was a good guy.


SD Jones blew the plan at Wrestlemania 1 and thus the “9 seconds” that Bundy was supposed to beat him in for the “fastest match record” was botched.
Stan Frazier would talk about his wife’s hemorrhoids in the locker room.
Frazier also took 10 year old X rays of his broken ribs and used them to get out of working in the WWF.  He blamed Bundy for the phony injures.
Mr. T was seriously blown up from working in the ring and Bundy found it hilarious that T had an oxygen mask on and 6 people tending to him, while the regular WWF workers came back, had a cigarette and read the newspaper.
SD Jones claims to have made more money than Bundy at Wrestlemania 1 despite losing. 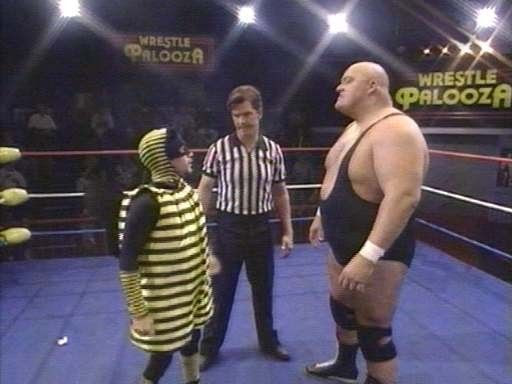 Harley Race told Bundy that Vince would make Race refer to himself as “The King” if Harley tried to contact him on the phone, since that was the name Vince gave him and it was just a little power trip for Vince to do things like that.
Andre didn’t like Bundy because after a week of putting Andre over in WCCW, Bundy joked to The Giant that “I guess I’m ready for New York now”.
Bundy feels really bad for Bobby Heenan since his mind is still ultra sharp and now he can barely speak.
Paul Orndorff would threaten to quit constantly in order to get his way with Vince.
Honky Tonk Man refused to leave tips for waitresses. He told Bundy that he did the math and figured he’d save a 100 a month by skipping out on tips and sometimes on the bill itself.
Adrian Adonis would go around airports and tell kids there was no Santa Claus.
Davey Boy Smith was a “nasty little prick”.
Dynamite Kid told Bundy that Davey Boy would intentionally piss on the hotel floors.
Fuji would do expensive “ribs” like super gluing a guy’s 300-dollar suitcase shut.  Bundy doesn’t understand why it had to go that far.
Barry Horowitz had his food shit in.
Haku and Jesse Barr got involved in a brawl that ended with Haku yanking Barr’s eye out of the socket. Haku got a $1000 fine and Barr was fired.
Mean Gene would pick up the ring rats, even looking as he did.
Brutus Beefcake was a bit of a prick in the 80’s.
Bundy received $50,000 for headlining Wrestlemania 2.


The midgets on Bundy’s team blew their spot and didn’t run in and stop Bundy from dropping an elbow on Little Beaver.

Bundy rants about Bret Hart being a “prick” during Bundy’s ’95 run in the WWF.  KKB says even Jim Neidhart makes fun of Hart in the modern day because Bret goes around talking about his “legacy”, which he was booked to “earn”.
KKB would spend time with Bret in the ‘80’s and they were decent friends.
Neidhart was very self centered – he’s alright though.
Butch Reed joked that KKB was racist.
Hercules beat on his girlfriend and Bundy paid to have her go home.  Herc would talk about shooting cops.
George Steele was a good guy but he turned into a NARC when he became an agent.
Muraco was laid back.
Superstar Billy Graham snubbed Bundy twice after they left the WWF so he’s on Bundy’s shit list.  Graham would steal TV’s from hotel rooms.
Tito Santana hated doing jobs and was cheap as can be.
Nikolai Volkoff was even tighter – he’d convince other guys to buy him lunch and never leaves tips.
Billy Jack Haynes is a great guy. He kicked “Iron” Mike Sharpe’s ass in a real fight.
Gorilla Monsoon buried Bundy a little bit in ’95 so Bundy wasn’t a fan.
Honky Tonk Man was a turd. He’d claim to not want to be mobbed in public places, and then once he’d get there and no one noticed, HTM would make it known LOUDLY that he was a famous wrassler.
Jake “The Snake” is a mess.
KKB doesn’t remember Survivor Series ’87. Bigelow being blown up was about all he can recall.
Andre didn’t like Bigelow since he would brag about his paydays. Bundy left in early ’88 because he felt it was time to move on.  He had a deal with a computer company for a while, but he wishes he had gone back to the WWF a lot sooner.

Warner Brothers wanted King Kong Bundy to try out for a role in the “DareDevil” movie.
Bundy was offered the roll of “Dynamo” in “The Running Man” but he felt compelled to stay in the WWF for his Heenan Family vs. Machines angle. Andre left the Machines to go make “The Princess Bride” and Bundy ended up losing out on a six figure payday that the movie offered.

“Married…with Children” producers loved wrestling so they named characters after KKB and Dusty Rhodes.
Ed O’ Neil started off making 17 grand an episode, which he loved since he was a struggling actor, and by the end of the series, Ed was making over $440,000 an episode.
Bundy owned a bar in New Jersey for a few years until he came back to the WWF.
KKB wished he had gone to WCW instead as he felt the WWF didn’t use him well during his ’95 run.
Undertaker versus Bundy at Wrestlemania 11 was an admittedly shitty match. The WWF wouldn’t let him cut promos building up to the match.
Vince wanted Bundy to do a job for Henry Godwinn, Bundy didn’t see anything in HOG and soon after jobbing Bundy quit.
The host asks about comparing workrate of a big man compared to a small man and Bundy goes off on a tangent that people want to see larger than life guys and part of wrestling’s mystique is gone because of so many smaller guys “ball room dancing” instead of behemoths pounding on each other.
WWF payoffs in ’95 were terrible.  Bundy worked six dates for 1100 bucks during one loop. There used to be a 200 dollar a night guarantee but that was gone by then.
Bundy was leery to call WCW or TNA for a contract since he figured that if the office doesn’t call you, you can’t expect a push.
KKB sarcastically feels he’s not worthy of the WWE HOF.  Bundy makes fun of Koko B. Ware’s induction.
Ultimate Warrior had a foul mouth in public.
Iron Sheik was always posing and preening himself.