Which Avenger Are You?

Which one are you? or which do you aspire to be? – a strength athlete? a physique competitor, or an all-round athlete? – or a blend of all 3? 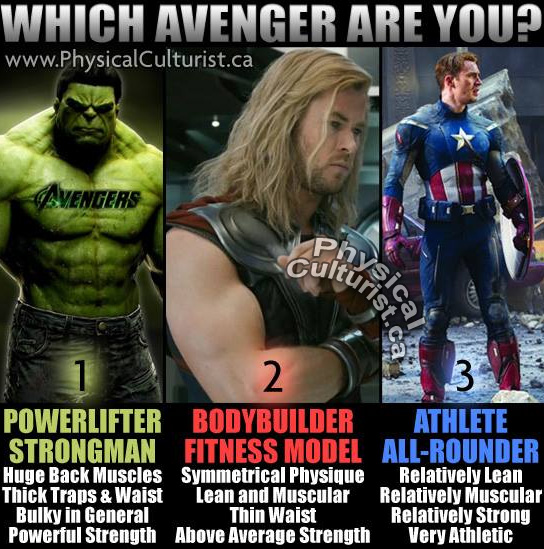 #POWERLIFTER / #STRONGMAN:
These are our strength athletes that include, but are not limited to Powerlifters, Strongman competitors, weightlifters, etc. They are the strongest members of the Iron Brotherhood, possessing immeasurable levels of raw strength. Generally, these people are extremely strong, robust, and are powerfully-built with broad shoulders and wide backs. You can usually tell them apart from the other stereotypes by the size of their traps and backs; they have very large upper back muscles and very thick backs in general because these are the muscles that generate the highest levels of power and strength. Possessing a bulky constitution, their thick waists and overall size allows their bodies to support huge amounts of weight, allowing them to lift very heavy things and perform superhuman feats of strength.

#BODYBUILDER / FITNESS MODEL:
These guys are the pretty-boys of the Iron Brotherhood. As Arnold puts it, they view the body as a piece of art. Unlike sculptors who can produce a human statue by slapping on some clay and chipping away at it, the bodybuilder/fitness model uses their own bodies as material, shaping their muscles through exercise to achieve the perfect symmetry and to acquire the most beautiful proportions. These guys are extremely lean as the low bodyfat percentage allows them to exploit their beautiful musculature.

#ATHLETE / ALL-ROUNDER:
These guys include, but are not limited to: athletes, soldiers, gymnasts, martial artists, crossfitters, fitness people, exercisers, etc. They are usually relatively lean and are not too bulky in appearance; extra body mass can affect their performance on the field. These guys posses amazing conditioning, GPP (general physical preparedness), and cardiovascular endurance, etc. Although not as strong as the strength athlete, they do posses an impressive amount of power for their size. They tend to be the healthiest of all of the stereotypes due to their generalized practices–it is also because of this that they are the most athletic of all the stereotypes.

These are just some fun generalizations to go by. Note that in the real world, there are those who are a blend of all 3 stereotypes. For example, we have powerbuilders who compete in powerlifting and bodybuilding. We may also have fitness models who compete in crossfit and other sports. There are also those who are very thin and lean who compete in strength sports, etc.

Interestingly, the physical culturists of the early 19th century were a blend of all 3. Not only were they extremely muscular and lean, but they also possessed super human strength and athleticism, performing feats of strength and acrobatics.