I thought it might be fun for us to compile a list of crazy Vince stories. I am going to list the ones I've heard, then put the source in parenthesis. I might have some details wrong but I tried to be as accurate as possible.

I can't remember who the guy in question was, but I love this story so I'll repeat it anyway:
This is more of a Steph story, but I love it so much:

There's a story on the Mark Henry episode of Talk is Jericho.
Apparently Vince invited Mark Henry to a workout session. Bear in mind that Mark Henry's claim as world's strongest man is based on the fact he is the only man to have competed at top level Olympic Lifting, Power Lifting and Strongman competitions (which though they may seem the same are quite different).
Vince tried to out rep him on every exercise. Henry went along with it because he's naturally competitive and even admitted that Vince tested him a little bit.
The next day Vince phoned Mark in great pain and admitted he had made a terrible mistake.
Edit: Mark says that he actually quit before Vince did.

Always enjoyed the one about the McMahon's playing pool at their holiday home in Boca. HHH and Steph against Vince and Linda. It was supposed to be a fun family game and Vince turned it into a serious competition. HHH and Steph kept getting lucky and were winning. Vince was getting mad at Linda because she was making their side lose. Eventually Stephanie ended up potting for the win and he cracked up and stalked off. Then later that night she called him through the intercom and sang 'You're tied to the whipping post, dad' to piss him off and from their bedroom, Steph and HHH could hear him literally screaming in anger on the other side of the house.
Moral of the story, everything is a competition to Vince and he doesn't like to lose lol...even to his own family.

Tiger Ali Singh complained to Vince about making him wear a turban and traditional indian garb, telling him it was offensive to his people and a desecration. Vince replied "You and D-Lo are gonna put on those fucking turbans, I don't care about desecration" (Patrice O'Neal on Opie and Anthony)

Vince in a nutshell:

PLAYBOY:When you do step aside, will you write a death scene for you alter ego, the evil Mr. McMahon?
MCMAHON: A death scene? No, that wouldn't be reality. Unless...you know what? I believe in the laws of nature. When it's time for me to go, I would like to be devoured by the biggest, baddest carnivore that ever walked the face of the earth. And then I'd like that son of a bitch to get indigestion and vomit my remains back up.
PLAYBOY: A romantic finish.
MCMAHON: Yep.
PLAYBOY: And you know what you'd get----
MCMAHON: Great ratings.


This one is excellent!

JR once told this on Opie & Anthony:
JR once farted in a car with Gerald Brisco, which made Brisco start gagging and throwing up. Vince heard about that, so backstage at RAW one night, he tried to fart and make Brisco puke. It backfired, and Vince shit in his pants. He then had to go out to the ring and do a promo! JR said that all the production people in his headphones told him about it, and that they were instructed to keep the camera shots ABOVE Vince's waistline for the entire promo!
Then went backstage and told everyone about it. He then took off his shit-stained underwear, put it on a stick, and chased Gerald Briscoe around with it.

His view on cheat meals....

I look at eating as fuel. I’m not that conscious of the protein I eat, but I know it’s a lot. I think cheat meals are very important, so I do it about once a week. When you cheat, go for it. It’s important from a psychological standpoint. Oreos are my favorite cookie. I’ll eat an entire box. And my philosophy is that the body can assimilate only so much in a given time. If you have two or three Oreos every day, not good. But if you eat an entire package of Oreos at one time, it’s OK. It just passes through. I’ll eat pasta loaded up with meat sauce. Pizza. All the carbs you stay away from normally, load ‘em up. I will gorge. It’s almost like I will force-feed myself on a cheat meal. And afterward I think, “Oh, my God, I don’t want to feel like this.” So it gets me back in the frame of mind immediately after the digestive process to do the right thing.

This one is hilarious too...

Vince McMahon was partying at a strip club with the boys. They all ended up back at the hotel in Ric Flairs room (without him there) and what was left of the party proceeded to piss all over his his bed, including Vince.
"I'm Vince McMahon give me the key dammit!"
The idea of a heavily drunk Vince McMahon trying to be one of the boys and elbowing his way through laughing like a maniac to land some piss on Flair's bed is absolutely magic.

Vince kind of was one of the boys at that point. He was the name on their checks, but he was at every show on camera with everyone and around the same age as most of the roster.

When Cena and Batista eliminated each other at the same time at Royal Rumble 2005 incident was on a live PPV.  Vince blew one quad on the way to the ring and then blew the other trying to get up (or something to that effect) thus why he's awkwardly sitting in the ring whilst the referees are arguing with each other over who won.  His reaction and commitment to character despite the shock and what has to be pretty incredible pain is fascinating and impressive. He is supposedly one of very few cases where someone has blown both quads at the same time.


On Rey Mysterio: HE WILL NEVER BE MY CHAMPION.

Every writer except Vince wanted Rey to win the Rumble and the title. They somehow convinced him but after the Rumble Vince regretted this immediately.
After some more convincing Vince was like "Fine! We'll give him the title but his reign is going to suck and he won't get over!! Fucking midget!!"
Fast forward Rey was basically booked as a jobber champion and his reign sucked just so Vince could say "I told you so"
He had a similar thing going with Daniel Bryan. Immediately regretting giving him the briefcase. Made him job to everyone. He was supposed to be the first one to lose his cash-in but all the injuries changed this plan. And after he got the belt he got over despite being booked like a joke champion.


Back at Wrestlemania 25, Mickey Rourke got so worked by Chris Jericho that he was convinced that it was a shoot. As a result, he brought muscle with him in case things went awry. One of the people he brought was former UFC LHW Champion, Frank Shamrock.
(On a side note, Shamrock knew that there was no threat of anything happening, to the point that he offered Dave Meltzer an opportunity to be part of Rourke's crew for the night.)
During the day, Jericho hashed things out with Rourke so he knew there'd be no issue. Afterwards, he told Vince about it, and Vince claimed that he, Jericho, and Dean Malenko could take them out, claiming "Look at that guy! He's a midget!"
Jericho offered to let him take the "midget", who was Shamrock. (Source: Jericho, Meltzer)

Vince would also regularly try to take Kurt Angle down. Now I can't stop imagining Vince just hiding in closets or behind curtains backstage until Kurt walked by and then jumping out and attempting to take him down while laughing hysterically.
God damnit

The most expensive Vince McMahon story is the time he came up with the idea that his wife, with no previous political experience, would make an excellent Senator of the United States. So he decided to run her as a Republican in the very blue state of Connecticut and spent $50 million of his own money in a race where she lost by double digits. HHH and Stefanie had been going door to door in support of Linda 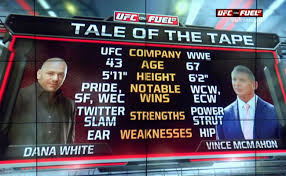 That time Vince getting F5'd by Brock Lesnar 2 years ago so he has a legit reason to have that hip surgery.  He was already getting hip surgery, I think the story was: he just wanted a kayfabe reason to be off TV. Also, he put some heat on Brock.

Mick Foley got him to go along with the Mankind persona. It was all Foley's idea, but he had to present it in a way that Vince was convinced it was his idea, then Foley just had to play along with it.

"You can put a mountain of this stuff in front of me and I'll never get addicted". Referencing snorting coke off his desk. From the book "Sex, Lies & Headlocks".

Off the top of my head I remember two stories that always stuck out to me.
The first was they wanted to do a whole thing with Stephanie was pregnant. Namely they would do the whole thing of "Who's the father?" and Vince wanted it to lead up to Vince being the father. Remember this was something he wanted to push on Raw. Stephanie said fuck no, as any sane human would do. So Vince decided to change it to Shane being the father. Both Stephanie and Shane said no to the whole thing, the word was that Vince was upset that he couldn't get them to do the story.
And then we have one of the worst things to ever come up with in wrestling history. Something that chances are the minute he saw it on TV, R. D. Reynolds of Wrestlecrap was giggling madly as he updated the site. Yes I'm talking about the Katie Vick/Kane necrophilia angle. Something that no sane person on the planet wanted to see, but Vince did.
The story I heard was this. Vince loved it as it was a joke to him, well it led up to a joke. Namely that video they did of Trips playing Kane and having sex with Katie's body and yelling "Oh god I really did it! I screwed your brains out!" and throwing spaghetti at the camera. Vince was cracking up about that big time, and believed it was the funniest thing ever thus why they did it. Vince also ran around telling everyone in the back about it, the story is they would stand there almost in shock as Vince is about to fall over laughing over the "Screwed your brains out!" line. So yeah Vince pushed that as he believed the pay off to that joke was something everyone would love.

A joke from a forum poster: Vince named his only daughter STEPHANIE McMAHON which is actually an Anagram for THE MACHO MAN PENIS.

Not sure about this one: The WWE was putting together a horror movie starring Kane called "See No Evil". Vince said he had this great idea for the film, and proceeded to pitch it to the writers and the director. His idea was that there would be a moment in the movie where Kane's pants would rip and his 4 foot long veiny monster penis would flop out and hit the floor.
The scene never made it into the movie. 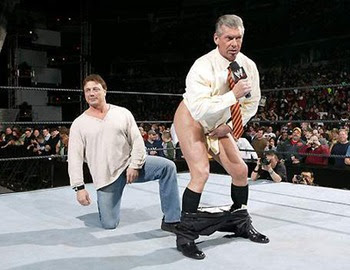 I cant see Vince McMahon ever retiring from office. he will die working. I guarantee it.
As the man himself would say, if you love your job, you never work a day in your life.