Floyd Mayweather is a wimp


Here is a text to illustrate the above statements. Written by FRAN on November 26, 2013. The integral script can be found on:
http://www.myboxingcoach.com/greatest-boxers/

How can you objectively rate old time fighters against the modern champs? Longevity, multi-weight championships & standard of opposition are just some of the criteria we read about in the boxing press.
On the face of it an old time fighter like Henry Armstrong, who held three belts at featherweight, lightweight & welterweight might not compare favourably with a modern champion like 5-weight world champion Floyd Mayweather Jnr. Floyd has never lost a fight and hardly lost a round in his whole career, Armstrong lost 21 times. So, is that it decided then? Well let’s look a little closer…..
The main difference between old time champs and modern champs is that old time champs were undisputed and modern champs are only partial champs. When Armstrong was champ, he was the only champ at that weight whereas Mayweather Jnr has never been an undisputed champ at any weight. In fact, in Armstrong’s range, between featherweight and welterweight, since 2000 there have only been 3 undisputed champions (Corey Spinks & Zab Judah at welterweight and Kostya Tszyu at light welterweight). Indeed, considering there are 56 recognised ‘world’ titles, since 2000 there have only been 9 undisputed champs (Lennox Lewis, O’Neill Bell, Roy Jone Jnr, Bernard Hopkins, Jermain Taylor, Winky Wright, Cory Spinks, Zab Judah & Kostya Tszyu). So is Mayweather really a world champ like Armstrong was? The answer is, no.
And if we fans are entitled to ask ‘why are these champs not seeking to be undisputed champs’? the answer might be ‘because there is plenty of money to go around and no need to take risks with your title by fighting another championship level opponent. In fact, today’s fighters will pay millions to avoid fighting rival titles just so they can hold onto their belts or give up the high risk belt completely and keep the other belts. Three notable recent example of this:
But Mayweather fought everyone, and beat all the top guys, right? Well, no, not really. Some fighters were refused fights with Mayweather Jnr unless they agreed to fight above or below their natural weight, others were avoided until they were past their peak and others were just avoided at all costs – most notably, Manny Pacquiao who Mayweather refused to fight on a 50/50 purse split (Manny was the biggest draw in the world at the time) and then, when Manny agreed to take a 40% split, Mayweather refused to fight unless Pacquiao agreed to Olympic-style blood testing up to 2 weeks before the fight and ceded to Mayweather the home location, choice of referee & judges (I won’t even mention the Mayweather camps fear of Antonio Marguerito).
Yes, but fighting through partial champs at 5 weight divisions must be pretty impossible anyways, right? Well not as hard as winning undisputed titles at three weights (which would count as 5 weights these days) and holding them all at the same time, defending his crowns each month against the #1 contender.
OK, but at least Floyd is undefeated. Well, yes, I will concede that Floyd is undefeated in 45 fights with 26 KOs. Poor Henry Armstrong lost 21 times by comparison. However let’s look a little closer: Armstrong fought anywhere, anytime against anyone. Floyd has never fought outside of the USA. Armstrong won 150 fights and 101 of those wins were by KO. Armstrong also drew with the undisputed middleweight champ at the time, Ceferino Garcia, over 15 rounds. Interestingly, Armstrong still holds the record for the most welterweight defences when he managed 18 defences of the undisputed welterweight title in a little over two years (this at a time when light-welters, welters and super-welters all fought for one title as there were only 8 championship weights) and it is strange that in all the time since his reign, no welterweight has gotten close to this figure….. not even Mayweather Jnr. 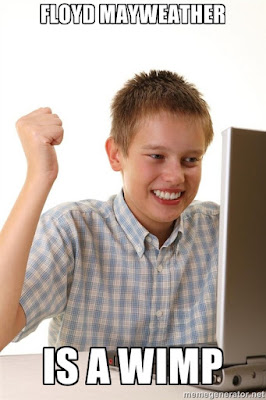