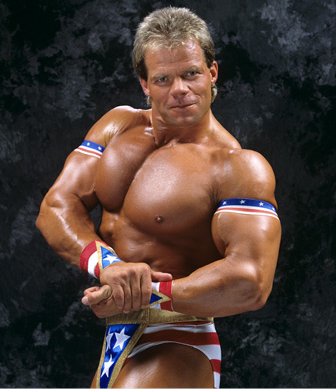 Lex Luger has one of best look and physique in pro wrestling history.
He wasn't called the "Total Package" for nothing.


Presented by Sean Oliver and the Kayfabe Commentaries crew
Luger starts by talking about the Buffalo Bills losing four straight Super Bowls and how much it hurt him since he was born and raised in Buffalo.
Ric Flair quit WCW in 1991 right before he was finally going to put over Luger for the title.  Luger and pretty much everyone was hoping Ric would change his mind but it wasn’t to be.
WCW tried to make the best of it by turning Luger heel and giving him Harley Race as a manager.  Flair took the real title with him so Luger had to hide the fact that the belt he was rewarded was in fact not the World championship.
WCW was making cut backs in 1992 and even Harley Race was on the chopping block – Luger felt this was a bad situation to be involved in and Luger called Vince McMahon and asked him if he might be able to join the WBF as a special attraction.
WCW gladly let Luger sign with the WBF since he had a fat contract and they wouldn’t have to pay him off anymore and it would also keep Luger off WWF TV until at least early 1993.
Luger and Vince would work out together during the WBF days and Vince came up with the “Narcissist” gimmick for Lex.

Lex claims he didn’t know that Heenan would be associated with him until the day of his debut at the 1993 Royal Rumble, however Luger can’t be remembering correctly because Heenan was building up “The Narcissist” on TV for weeks leading up to the event.  I can recall that when I was 11 I didn’t know what a narcissist was, so I naturally assumed it was going to be just another monster type heel.
Bobby Heenan was worried he would be perceived as a “queer” for gushing over Luger’s body.
2 weeks before a WBF PPV Luger crashed his motorcycle into a car and he was flung 150 feet into the woods.  Luger had to quit working out for four months while his bones healed.
ICOPRO is discussed and Luger thinks Vince was ahead of the game here as now  a training supplement like this would sell like crazy.  As a kid I just assumed this was the new version of steroids coming on the heels of the steroid scandals. 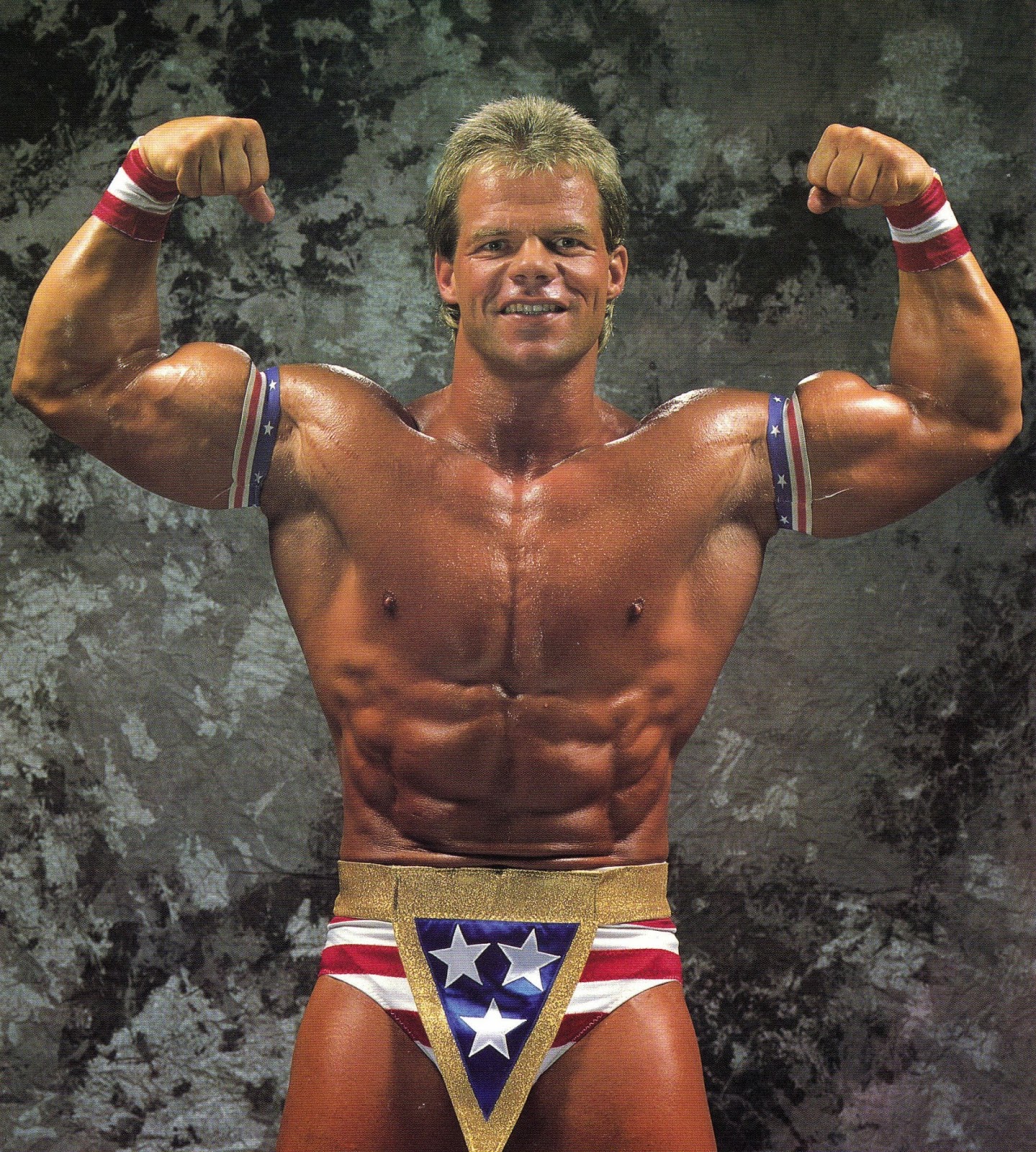 Doink getting over didn’t surprise Lex as once Vince gets behind someone, they tend to get pushed until they are over.
Luger liked running RAW from the intimate Manhattan Center.  Excellent TV environment.
Hiro Matsuda taught Luger to stay on his feet for much of his matches.  Luger knows he wasn’t a good worker, and his body was where the money was in.
Yokozuna is put over as a great big man worker.  The Samoan guys were all good workers.  Underrated strength and a great locker room guy.
Giant Gonzales was an attempt to create a new Andre the Giant type spectacle.  Flair wanted El Gigante to use a delayed suplex as a finish but he couldn’t physically pull it off.
Working a long match requires a good worker who understands how to pace a match,
Luger wasn’t surprised that Flair left the WWF as Flair was always viewed as a WCW guy.
Lex met Andre for the first time at a airport – Andre offered him a ride on a golf cart as they rode through the terminals.
The giant ego that Luger naturally had was helpful for Luger’s cocky in ring mannerisms.
Luger worked off his ring rust prior to his WWF run by going down to Memphis and working a series with Jerry Lawler. 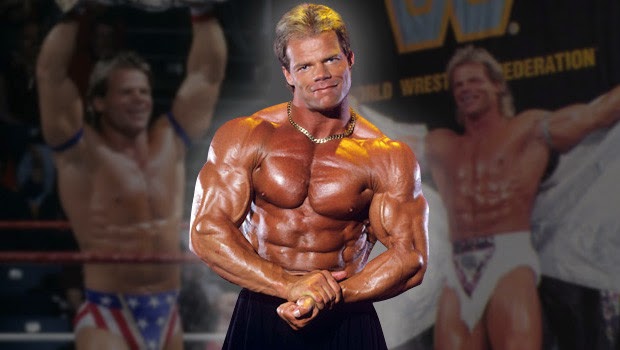 The WWF drug testing was serious at this point so Luger had to stay off the juice and yet figure out how to maintain his huge body.
Drug tests were random and frequent.  Luger was once tested 4 straight days.  Cocaine, marijuana and steroids were the 3 main concerns.
Vince would always have a stooge with him at meetings in case things got physical (Like the late 1992 incident when Nailz attacked Vince over grievances.) This also gave Vince a witness to any deals that may be made.
Flair talked highly of Kerry Von Erich even in spite of Kerry being messed up at times when they worked.
Luger was glad Hogan was coming back to the WWF in 1993 as it opened up more opponents to work with as well as more potential fans coming to the arenas.
Bret Hart got Luger hooked on Starbucks.  While others were out partying Luger was drinking espresso to get wired for a work out.
Dino Bravo’s mob related murder didn’t shock everyone as many in the WWF knew of his mob connections.
MSG wouldn’t let the guys park in the building and so they had to park in the streets and be bussed to the arena.  Luger loved the experience of being there though.
Luger is impressed by how wide the scope of the WWE Hall of Fame is at now.
Curt Hennig being Luger’s first Wrestlemania opponent was great since Curt was capable of carrying anybody.  Hennig forgot the match they had planned and Luger had to call it on the fly.
Luger wasn’t a party guy and he stayed to himself -even when they were in Las Vegas for Wrestlemania week.
Lex talks about the WCW gimmick idea of “The Humpbacks” where both guys would have humps and thus they couldn’t be pinned because their shoulders wouldn’t be touching the ground.
The 1-2-3 Kid’s gimmick worked well since he was so much smaller than most of the roster.
Matsuda taught Luger to not complain about doing jobs.
If wrestling were a shoot, Meng would have been the perpetual champion.
WWF cut back pay on RAW to 150 dollars per worker.
Luger told the Steiner Bros. not to complain about their payoffs since Luger was a “star” and the Steiners were “garnish” on the cards.  This comment led to long term heat.
Vince would quietly help a variety of talent who had fallen on hard times.
Luger knew of Kevin Nash all the way back to the days of Nash just being the giant head bouncer at a Atlanta strip club.
Hogan didn’t have his heart in the business anymore by 1993, so his departure in June of 1993 didn’t shock Luger.
Luger was stunned when Vince called him in the office and told him of the plans to give him an All-American gimmick.
Lex was wary of the Yankee Doodle gimmick since it went against his mentality as a worker.  Once the fans popped for his slamming of Yokozuna, Luger bought in.
The fact that he would remain in the red, white and blue outfit for the rest of his push wasn’t an expected part of the initial push.
Luger liked the look of Ludvig Borga and felt he had the intangibles to be a effective heel.  Lex blames his own powerhouse style as clashing with Borga’s similar style which led to Borga as a heel having to show too much ass too early in his WWF run and it hurt Borga’s heat.
Fuji would piss on guy’s shoes at bars.
Vince wanted to keep the drug testing in-house. 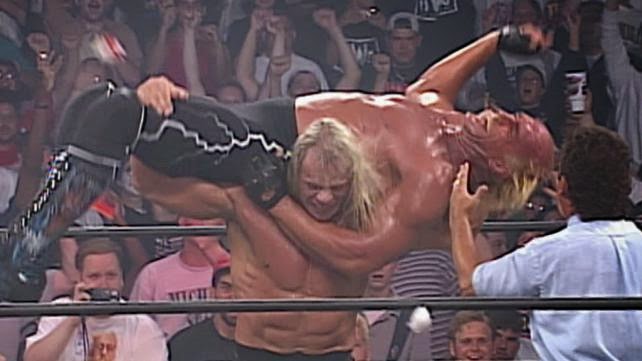 McMahon wanted the wrestlers to be the stars and he held back his own desires to be an on camera character.
Matsuda’s “Don’t complain about jobbing” rule came into play when Luger failed to beat Yokozuna at Summerslam despite his big monster push.  (This just added to Luger’s rep as a choke artist following his failed attempts against Flair at 3 or 4 different PPVs in WCW.)
Luger’s back was injured right after Summerslam and he was wheel chair bound for 2 weeks.
Shawn Michaels was asked to drop the IC belt and he quit the WWF instead.  He weighed about 240 and Vince wanted him to bulk up even more – without steroids.
Luger praises Chief Jay Strongbow as an agent – perhaps the first time I’ve heard praise for the Chief on a shoot.
Mr. Perfect quit/was suspended after complaining about not winning the IC title.
Lex didn’t care about titles as they were just extra crap to lug and he got paid premium level either way.
Wrestlers were slobs in general.  At a house show someone shit on the floor and got the WWF banned from the arena.
Luger was a bit apprehensive to show his family off at Survivor Series since then the rats would know he was married.
Lex suffered a spinal injury in recent years and was suppose to be an invalid but he’s recovered far beyond expectations.