Then the beginning of the 2000 became the era of the Don King guys (John Ruiz, Chris Byrd, Hasim Rahman, Lamon Brewster) all four were world champions. I know having 4 world "champions" doesn't make any sense but having 4 "world" champions generate more money than one absolute real undisputed champ.

Of the four heavyweight titles, here are the last four Americans to hold those belts.

Thankfully the Klitschko Brothers saved us from the boring Don King guys era. However, I'm one of a few North American to praise the Supreme Domination of Wladimir and Vitali Klitschko.

Only one very big problem with The Klitschko Bros. They aren't American!!!

Here came the next America's Heavyweight, the long-awaited America's savior, the chubby and tattooed Mexican-American Chris Arreola. Til the 27-0 undefeated Arreola was used as a human punching bag by none other than European villain Vitali Klitschko. Then the fallen American hero lost twice to the CANADIAN WBC World Heavyweight Champion Bermane Stiverne.

USA here is your last chance for redemption.
Your American Hero.
The Next Big Thing...
The Great Black Hope...
He has the look, the size, the record, the punching power...
He is black...
He is undefeated...
He is AMERICAN!

He even has a cool name! 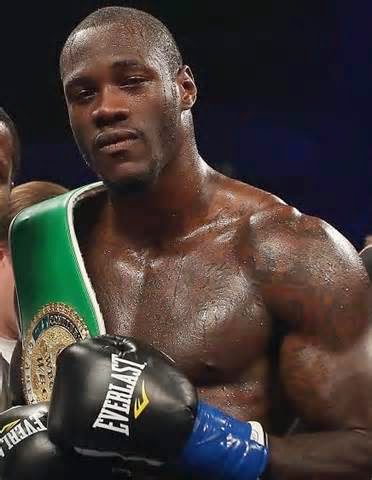 Has an incredible Pro Boxing record of


ALL KOs INSIDE OF 4 ROUND!!! Nobody survived beyond 4 rounds against Deontay Wilder!!!

For a total of 58 rounds, his average fight lasting only 1.8 rounds.

23 Bums... Oups! Bum= Below Usable Measure = has less than 12 fights in his whole career or has lost 25% (or more) of fights of his WinLossCareerRecord.


Well! The opposition he faced is far from impressive. Regional club-fighters, journeymen, and late-30s has-been contenders.

Nothing wrong with this, I know it's stupid but ALL those "impressive" contenders 's records are built through hand-picked opposition. That's the way it is!

the Secret of his Beyond Perfect record


The Moment Of Truth

I am thrilled by Deontay Wilder but I have to admit that I would be happy that my compatriot Bermane Stiverne scores an upset by KTFO of the overprotected can-crusher Deontay Wilder.

Both boxers are KO artist, so it will certainly be one hell of a fight.

May the best man wins! No corrupt judges decision please!